The November jobs report showed the weakest growth since April, confirming our expectation that the economic recovery would hit a soft patch to finish the year. Seven months were needed to recover 60% of the 21 million private-sector jobs lost, and at the current pace it may be two years before the labor market fully recovers. It is possible payrolls may outright fall in December, particularly if economic restrictions rise from here.

Even still, the longer-term trajectory of the economic recovery remains in-tact, and falling expectations about growth may ultimately prove a boon to stock prices. Markets love when everyone expects the worst, but the economy and U.S. corporations manage to over-deliver. Current expectations for 22% earnings growth in 2021 may seem high, but we see it as an easy hurdle to clear coming off 2020 comparisons.

Congressional leaders appear closer-than-ever to reaching a deal for another coronavirus aid package. Proposed stimulus is hovering around the trillion-dollar mark, which is a far cry from the $2-3 trillion packages that framed earlier discussions. More stimulus seems all but assured, which pushes forward two of the themes we discuss this week: the falling dollar and ‘forgotten’ liquidity. 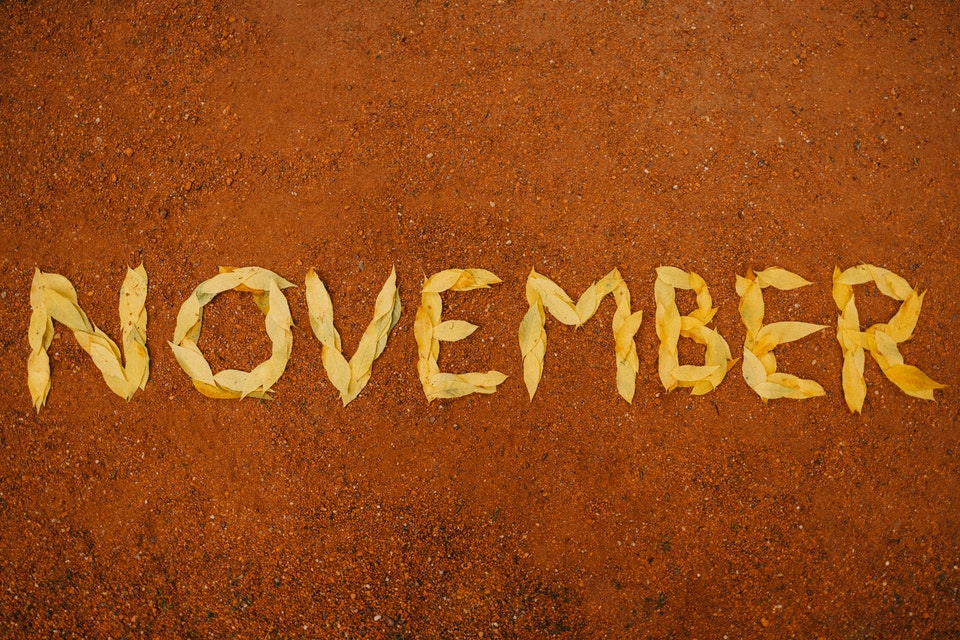 November was a record-breaking month.

We can keep going...

Energy shares posted their strongest month ever in November. Global equities recorded their largest monthly gain since at least 1988. Bloomberg also noted this week that after lagging bond funds for most of 2020, ETFs tracking equities hauled-in a record $81 billion in November, bringing total inflows to $196 billion (eclipsing fixed income’s haul of $192 billion).

In Silverlight’s November 7 edition of 5 Things We Learned This Week, we wrote that “elections historically lead to strong equity flows,” adding that the world is awash in liquidity. Combine the two, and you get a November to remember.

“Get Ready For A Supercharged Economy” 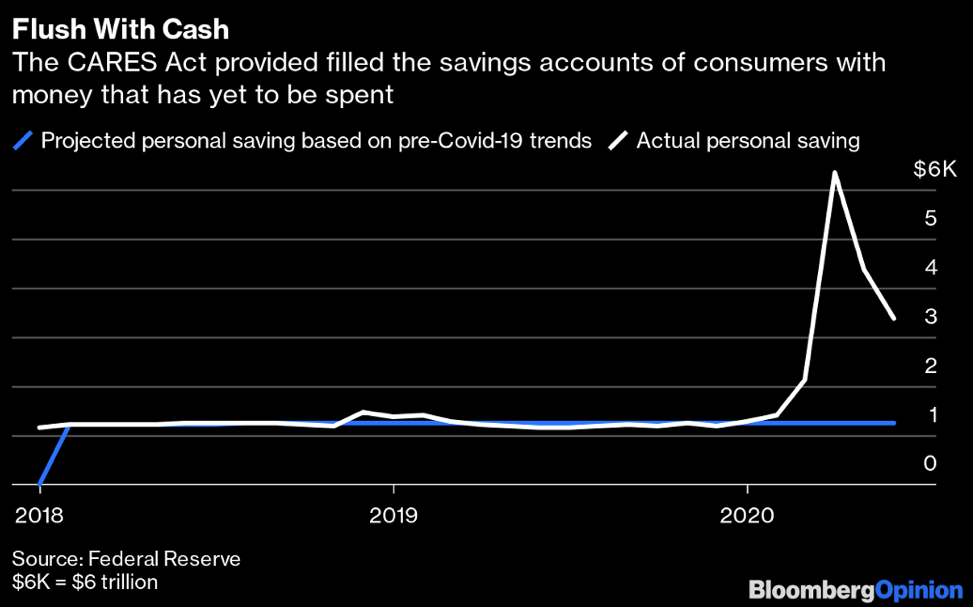 The University of Oregon’s Senior Director of the Oregon Economic Forum, Tim Duy, is encouraging his readers to get ready for a supercharged economy in 2021. His thesis: there’s way more liquidity in the system than just about everyone appreciates.

According to Duy, households have accumulated excess savings in 2020, a combination of stashed fiscal stimulus payments and higher wages and salaries.

A common narrative today is that without more fiscal stimulus, household spending is poised to crash. But Duy says this hinges on the assumption there are no jobs available to compensate for lost income, which has simply not been the case in aggregate. American households aren’t dipping into savings—they’re adding to them.

Total checkable deposits in the economy have surged by about $1.3 trillion dollars. Consider that a liquidity cannon aimed at 2021. 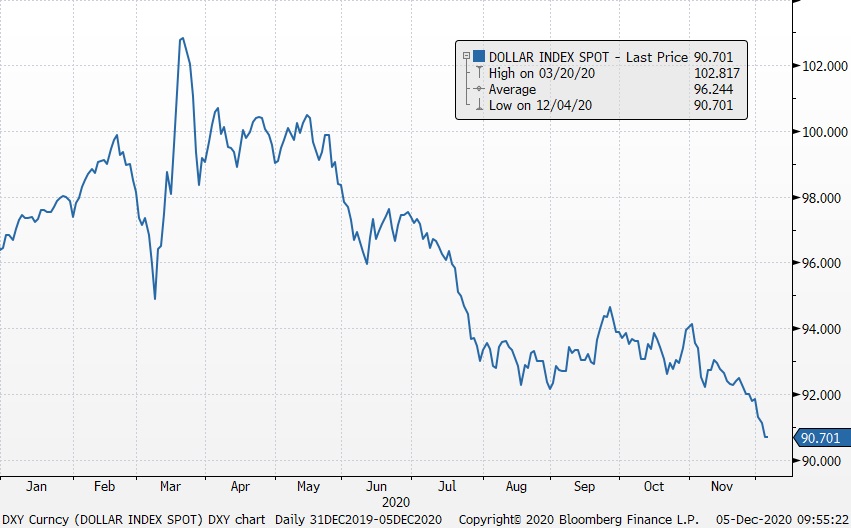 The Wall Street Journal Dollar Index, which measures the dollar against a basket of its peers, fell this week to its lowest closing value since April 2018.

As the dollar slides, the euro, Australian and Canadian dollars, and Korean won have all hit multi-year highs. The Swiss franc is at its strongest level since 2015, and the British pound is nearing a one-year high even as Brexit looms.

We’ve been expecting this dollar weakness in 2020 and maintain positioning in areas of the market that benefit from dollar weakness. That list includes commodities, mining firms, international equities, and a recent pivot to more value-oriented securities, including financials. We think a persistently weak dollar will ultimately drive inflation, higher interest rates, and a steeper yield curve.

Why is the dollar going down? As shown in the table below from Gavekal Research, the U.S. is winning the global "Debt Derby." This makes the U.S. a relatively riskier sovereign credit, which is bearish for the dollar. 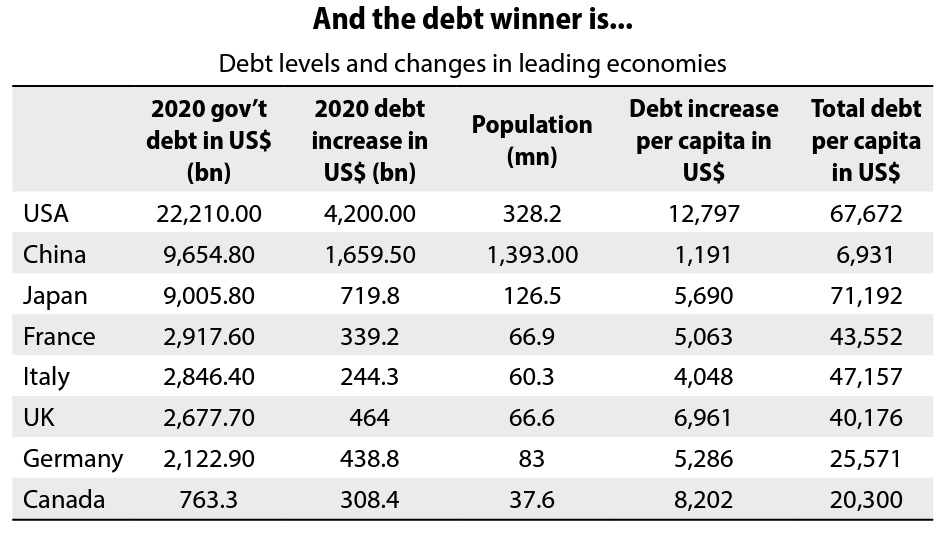 All The Rage: SPACs 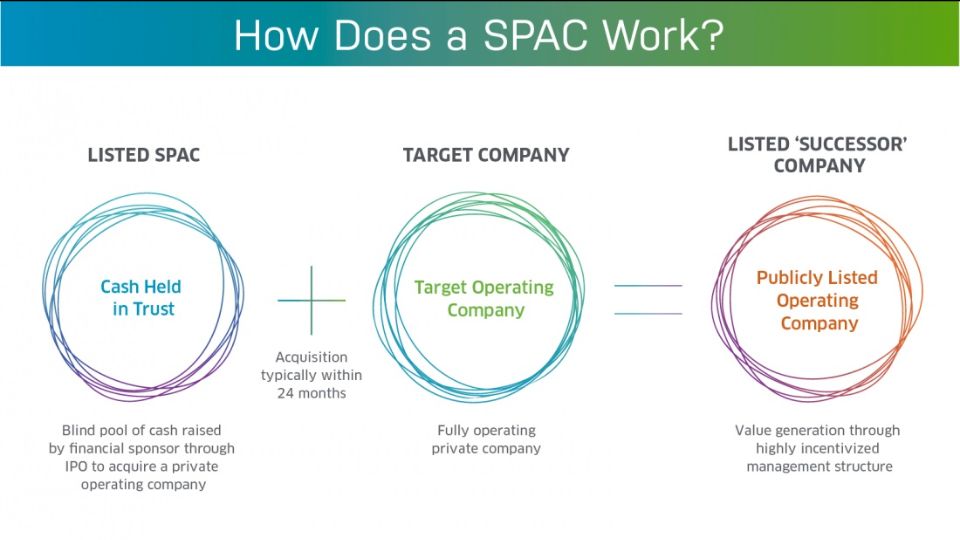 For readers who are new to the concept: SPACs are shell companies that raise cash in order to target and acquire companies—often flashy start-ups—with the ultimate goal of taking the company public at windfall-generating valuations.

Through mid-November, SPACs had announced 71 deals with target companies (a record), but 15 of those companies made no revenue last year. Case-in-point: one recent, noteworthy SPAC deal involved an electric-vehicle maker named Fisker Inc. Fisker went public in October via a SPAC with a $4 billion market capitalization, after projecting it would make over $13 billion in revenue by 2025. This is a huge valuation for a company that hasn't generated any revenue to date.

There’s a key takeaway here for investors. Namely, when stuff like SPAC booms are happening, it’s good carefully scrutinize what valuation you’re paying for future cash flows, or if the companies you’re buying even generate positive cash flows in the first place. The outperformance of unprofitable companies over recent years cannot persist in perpetuity, and if rates continue to rise, its bad news for hyper-growth, high-flier stocks like the ones targeted by SPACs.

There are other ways to participate in the capital raising, deal-seeking, M&A growth space. For instance, we think multi-faceted capital markets firms like Goldman Sachs (GS) are in a strong position. Silverlight recently bought GS and made it one of our biggest positions—we see it as a way to profit on things like SPAC / capital raising boom, reflation into next year, the value theme, all while investing in a world-class enterprise at a very reasonable valuation. Unlike SPACs that make no money and are impossible to value, GS trades near an all-time low price-to-tangible book value ratio of ~1.0x vs. a historical average of 1.6x. 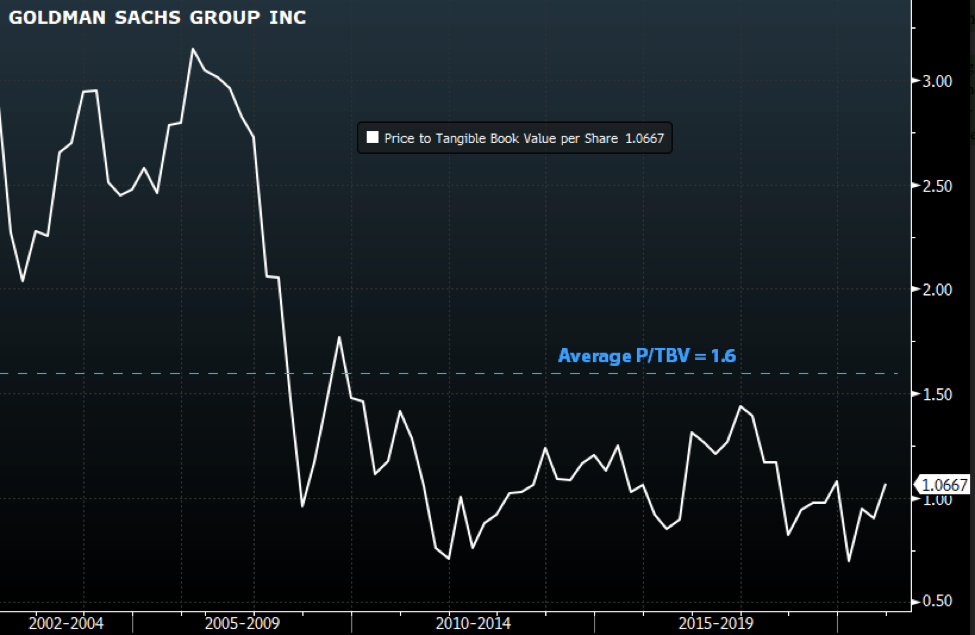 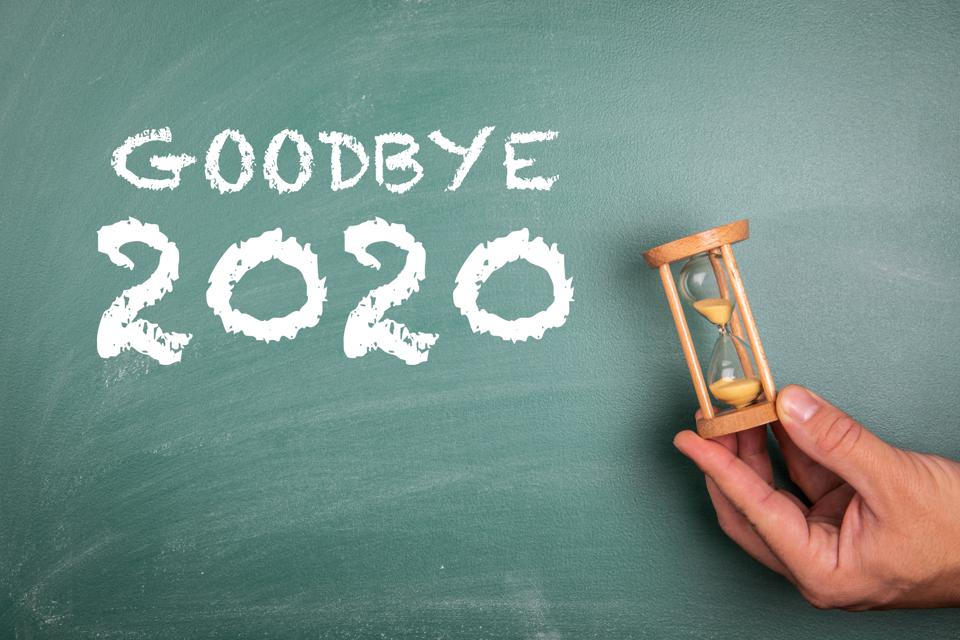 Whatever your experience in 2020, there’s still an opportunity to finish strong. Thoughtful planning is a reliable way to do well and feel good, and December is a great time to do it.

Here are a few quick tips:

RMD reminder: For 2020 only, consider not taking your RMD (CARES Act provision) if you are in a higher income tax bracket in 2020 than you expect to be in 2021 or future years.

Tax loss harvesting. Silverlight proactively does tax loss selling before December, because historically there’s been a performance edge to not waiting until the last minute. This year, we started thinking about tax loss selling as early as the spring swoon to get ahead of the curve. That being said, everyone’s situation is different, so get in touch if you have questions or ideas to discuss.

IRA Withdrawals. If you’ve been impacted by Covid-19, you may be eligible to withdraw $100,000 penalty-free from an eligible IRA or retirement plan. Income tax on the distribution can be spread over three years, or avoided if you repay the money in that time frame.

Roth Conversion. If you experienced business losses that flow-through to your individual tax return in 2020, consider strategies like a Roth conversion to create income to offset the loss.

Plan. And finally, strategize with your advisor! Now is the time to thoughtfully consider how your past experience might shape your vision for the future.

Giving Tuesday follows Cyber Monday, which is on the calendar a few days after Black Friday. It’s hard to keep up with all of them.

For those who might find themselves in a charitable mood, Giving Tuesday came with a little extra tax break this year. The CARES Act has a provision allowing taxpayers to make a tax-deductible $300 cash contribution to a 501(c)(3) charity without itemizing, meaning you can take the standard deduction and also deduct $300 from your adjusted gross income (AGI) for 2020.

Shaving $300 from your AGI won’t make a big impact on your taxes for 2020, but it could help someone in need. Not a bad way to turn the page on the year.