A sharp selloff on Monday proved short-lived as the S&P 500 rallied 2% this week. Day-traders reportedly swarmed-in to “buy the dip,” picking up stocks at the fastest pace ever. DataTrek estimates retail investors still have $400 billion in cash on the sidelines.

Median U.S. home prices just hit a new record. The buying frenzy is being met with supply constraints nationally, which has been exacerbated by higher costs of building materials like softwood lumber. The median existing-home price hit $363,300 in June, which was up 3.3% from the month before and 18.8% from last June. Sales are up over 20% from a year ago. Home builders are ramping-up production, but the supply shortfall is so large that it could take years to approach equilibrium.

Life expectancy in the U.S. fell in 2020 by 1.5 years, to 77.3. This single-year decline is the biggest since World War II, and was of course fueled by the pandemic but also its collateral damage—rising overdoses, homicides, and other chronic diseases. Rising life expectancies are generally a sign of vibrant and improving socioeconomic conditions, so it is in every country’s best interest to see this number go up over time.

Readers should brace for a looming showdown over the federal debt ceiling. In July 2019, Congress suspended the debt limit for two years as part of a broader agreement on government spending. The agreement ends effective July 31, at which time the debt limit is restored to $28.5 trillion. Unless Congress acts to suspend or to increase the debt limit, the government will not be able to issue new bonds after the end of the month. Estimates suggest the federal government could run out of cash to pay its bills by October or November.

We expect loads of political posturing and media attention over the debt ceiling, akin to what we saw in 2013 with the “fiscal cliff.” To be sure, markets can get agitated if Congress waits until the 11th hour to pass a resolution, which currently seems likely. At worst, failing to agree to another debt limit suspension (or an increase) would result in the U.S. defaulting on debt payments for the first time since 1979, when the Treasury was late on some T-bill payments. Research suggests the country paid a price: T-bill interest rates rose by about 60 basis points after the first default, and remained elevated afterward.

The National Bureau of Economic Research declared the 2020 pandemic-induced recession lasted two months, officially ending in April 2020. Note: this means that by the time the recession was officially declared in June 2020, it was already over. A good reminder here that a lion’s share of financial news is backward looking, meaning it has no bearing on future stock prices.

Bitcoin Is Not Working As An Inflation Hedge 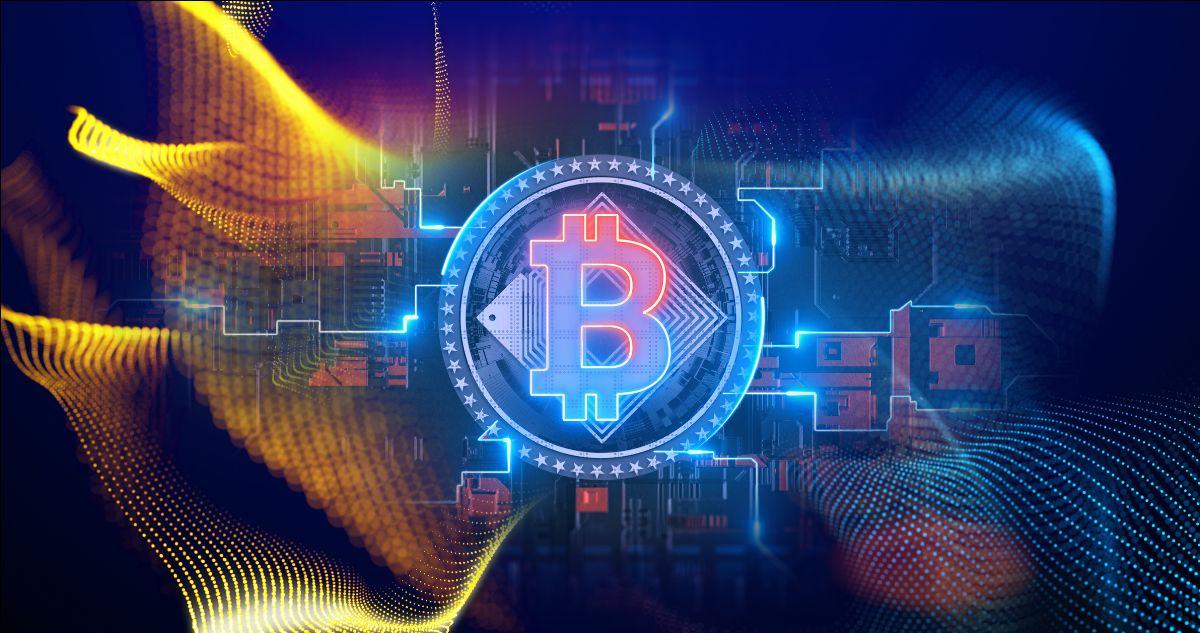 Bitcoin enthusiasts promise a lot of things: ever-rising prices because of limited supply, investment in the most groundbreaking technology on the planet (blockchain), and a useful long-term hedge against inflation. It’s questionable whether bitcoin actually offers any of these things.

We have written before about how bitcoin lacks intrinsic value, and also that the people who benefit most from bitcoin’s rise are people who hold the most bitcoin (i.e., Ponzi scheme?). To date, bitcoin has never been tested as an inflation hedge—the consumer price index has tracked below 2% since bitcoin’s founding in 2009.

Now, inflation is here, and bitcoin’s price is going the wrong way. The cryptocurrency has lost about 50% of its value since mid-April, consistent with its historical pattern of wild volatility. Meanwhile, the consumer price index jumped 5.4% in June, its quickest increase in 13 years. Globally, inflation measures in 49 countries are tracking higher as bitcoin plummets. 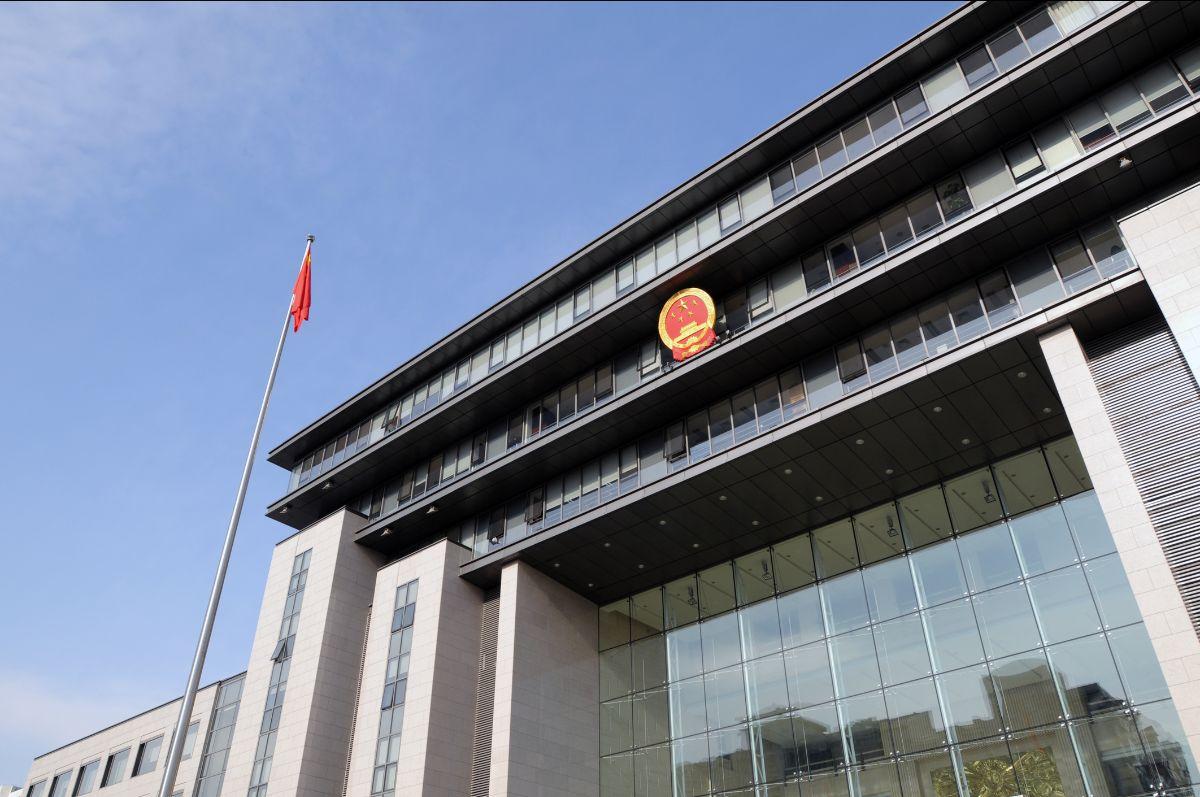 Prior to 2021, few people had heard of China’s Antimonopoly Bureau. But the market regulator is really making a name for itself this year.

In April, Chinese regulators hit Alibaba with a record $2.8 billion fine for anticompetitive behavior, opening the door to widespread investigations into the business practices of Chinese companies.

Another high-profile case involved ride-hailing giant, Didi Global (the Uber of China), which has seen its stock plummet by about 50% since it became a target of Chinese regulators. Many other big names have been caught in the mire. JD.com has lost about a third of its market cap and Baidu is down roughly 50%.

On Friday, the Nasdaq Golden Dragon China Index fell by 10% in a single trading day, as rumors indicated Chinese regulators were increasing scrutiny of its $100 billion education industry—perhaps in an effort to force private companies to become non-profits.

China generates incredible growth and is home to many innovative, profitable companies. But government unpredictability and overreach will always be a problem. Silverlight has no exposure to U.S.-listed Chinese stocks. 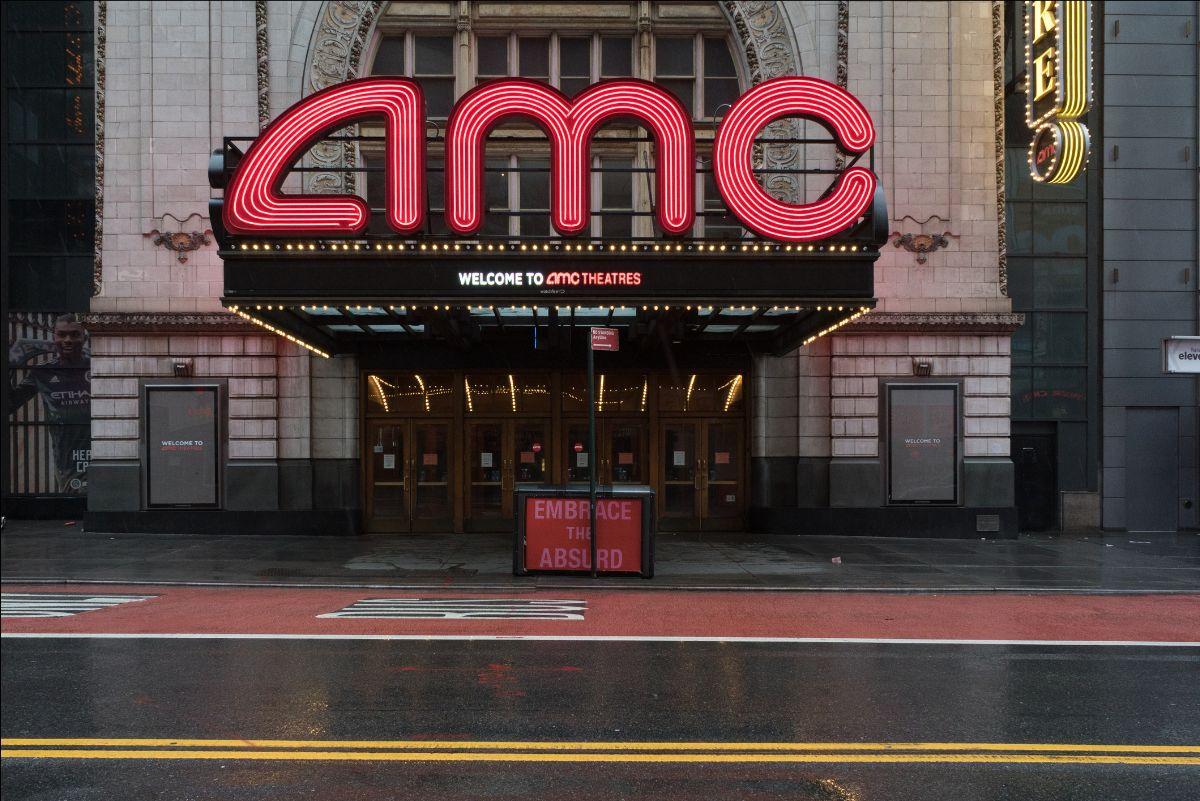 The mania over “meme stocks” continues to take on new, weird, and desperate forms. The latest chapter in the  AMC saga involves message boards and GoFundMe pages trying to raise money for advertising schemes, such as $550 to fly “AMC TO THE MOON HOLD” over North Carolina, $3,000 to have a pilot fly a similar message over Wall Street, and $4,250 for a flight over Canada.

The so-called AMC “apes” are increasingly turning to rallying cries and fundraising activities to drum-up more buyers of the stock, with the ultimate goal of sending the stock “to the moon” – though no one has defined what “the moon” actually means. In some cases, fundraising pages are asking people to donate money to traders who would in turn buy and hold more AMC shares, to ‘stick it to the hedge funds.’ It’s unclear why the donor wouldn’t just purchase AMC shares for themselves.

In some social media circles, the target price for AMC is $100,000 per share, which would set the movie theatre chain’s market capitalization at $51 trillion. Seems about right.

More Signs Inflation May Not Be Transitory 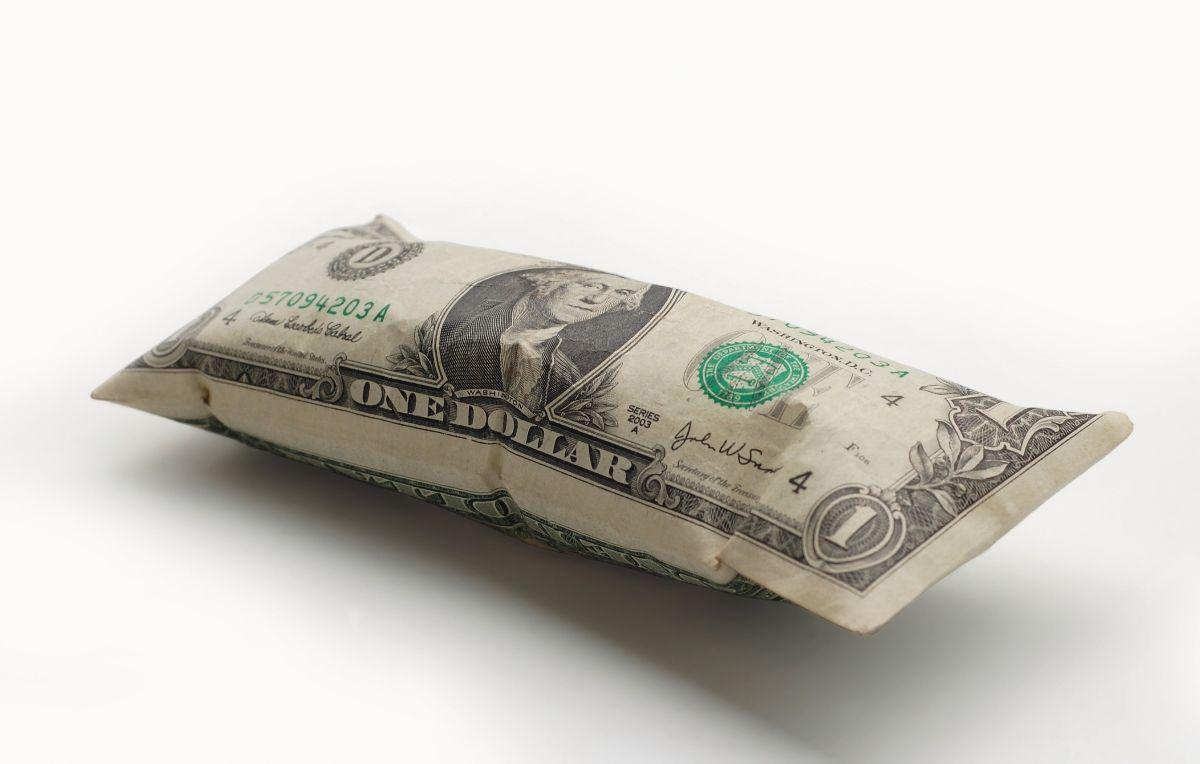 The Federal Reserve’s “inflation is transitory” narrative contrasts with the tenor of Q2 earnings calls. In a note this week by Bank of America’s Savita Subramanian, she cited a sampling of inflation mentions from conference calls. CEOs consistently mentioned rising input costs and their efforts to pass costs onto their customers.

From the massive consumer packaged goods company, Conagra: “We expect the negative impact of the cost inflation to hit our financials before the beneficial impact of our responsive actions, including our pricing.”

From PepsiCo: “We're seeing inflation in our business across many of our raw ingredients and some of our inputs in labor and freight and everything else.”

On Friday, one of the leading bond investors, Mohamed El-Erian, said his outlook for sticky inflation is one of the surest market calls he's ever made. It will be interesting to see how this real-time economic experiment plays out.

Sector Rotation Out of Cyclicals 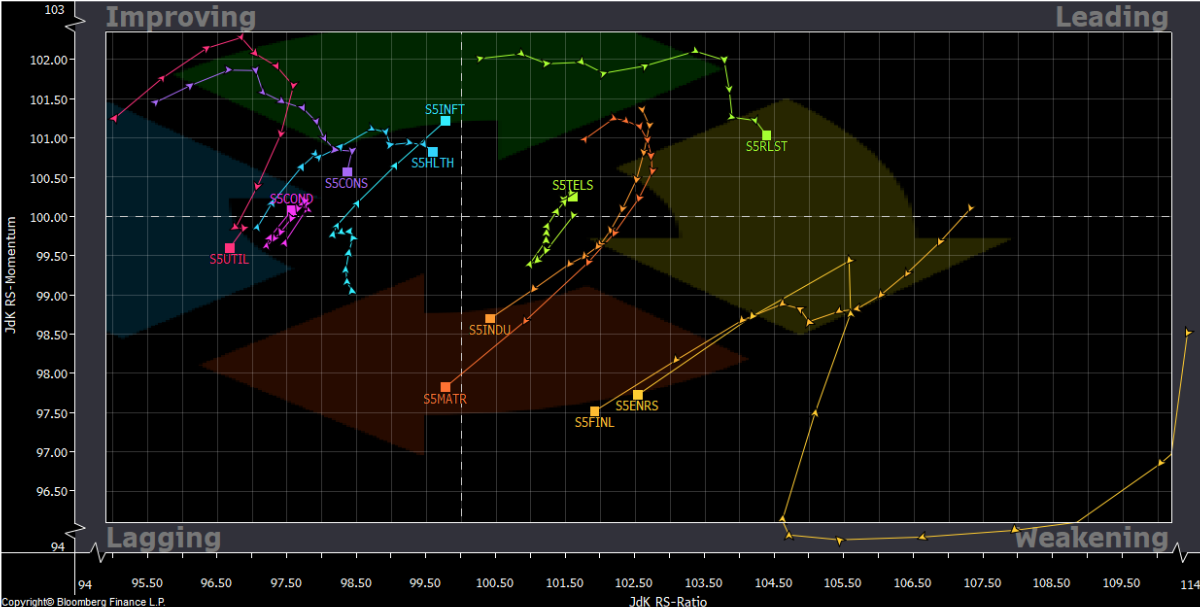 Regular readers are familiar with the Relative Rotation Graph. We usually reference it whenever we think the relative performance of sectors is sending a clear message. Right now the message appears to be: risk off.

Since momentum changes before price, the performance tails of sectors tend to follow clockwork like patterns. When a sector is moving up and to the right, that's generally bullish. Down and to the left generally indicates an underperformance trend is developing.

Currently, the sectors with distinctly bearish patterns include: Financials, Materials, Industrials, and Energy. Note: these are all cyclical sectors that tend to do well when the dollar is weakening. It looks like these sectors have room to run before they will likely bottom in the Lagging Quadrant (bottom-left).

Conversely, sectors that have been showing better momentum and relative strength include Technology and Health Care. Both sectors have benefitted from investors rotating toward higher quality growth stocks as of late.

The loss of momentum in cyclical stocks augurs for a more cautious approach to equity markets in the coming months.

Say Something Nice To A Stranger

People are out and about again, and it's nice to see people's faces in the grocery store or on the street. Next time you're checking out with a cashier or standing in line, why not figure out a way to compliment them or strike up a quick conversation? Being nice to people pays dividends.

In a study conducted a few years ago, two psychologists at the University of British Columbia tested whether short conversations with strangers could make people happier, lift moods, and create a greater sense of belonging.

Turns out it can do all three.