We open this week with some exciting news – Silverlight Asset Management is pleased to welcome Louis Sutton as the newest member of our team. Louis recently graduated from the University of California, Berkeley, where he majored in Applied Mathematics.

This summer, Louis will be interning as a Quantitative Analyst. We are leaving the door open for him to continue working in the Fall while he pursues his Masters in Finance at the University of California, Irvine.

The S&P 500 rose 0.4% this week while bond yields fell. The strong bid in the bond market surprised many given the economic news. The much-anticipated inflation reading came in hot this week, with the consumer price index (CPI) rising a stout +5% year-over-year in May. Core CPI, which excludes food and energy, rose +3.8% over the same period, the largest increase for that reading since June 1992.

We're not in the camp that's ready to call inflation "transitory" yet. CPI pressures have historically lagged M2 money supply growth by a few years, and companies big and small continue to report rising input costs and wage pressures. The prices of most goods and services are going up, and many of the companies raising prices will not turn around and lower them in the future.

The number of job openings in the U.S. hit a record 9.3 million in April, according to the Labor Department. Meanwhile, the rate at which workers voluntarily quit their jobs—which is a sign of confidence in the jobs market—also hit a record in April. The end result is that supply and demand imbalances in the labor market persist. 9.3 million jobs are available, while 9.8 Americans are unemployed and looking for work. Go figure.

Some say low wages are the problem. If that's true, the market is responding: average hourly earnings rose 0.5% last month after a 0.7% increase the prior month. This is a robust pace for sequential readings, which also supports our inflation thesis.

Staying on the inflation theme, China’s factory-gate prices rose by the most in 13 years in May, and its producer-price index jumped 9% from a year earlier. China says that rising price pressures in crude oil, iron-ore, and metals are fueling the pressure.

China’s government has been aggressively attempting to intervene. According to Bloomberg, “[Chinese] officials have raised transaction fees, changed tax rules, censored industry research, urged producers to sell inventories, cajoled trading firms to cut bullish wagers, vowed to clamp down on “malicious” speculators and more” in an attempt to tamp down rising prices. But China’s state intervention is not the story here—they manipulate markets all time. The takeaway is just how seriously China is taking the inflation threat, which underscores the scope and gravity of inflation as a global issue. 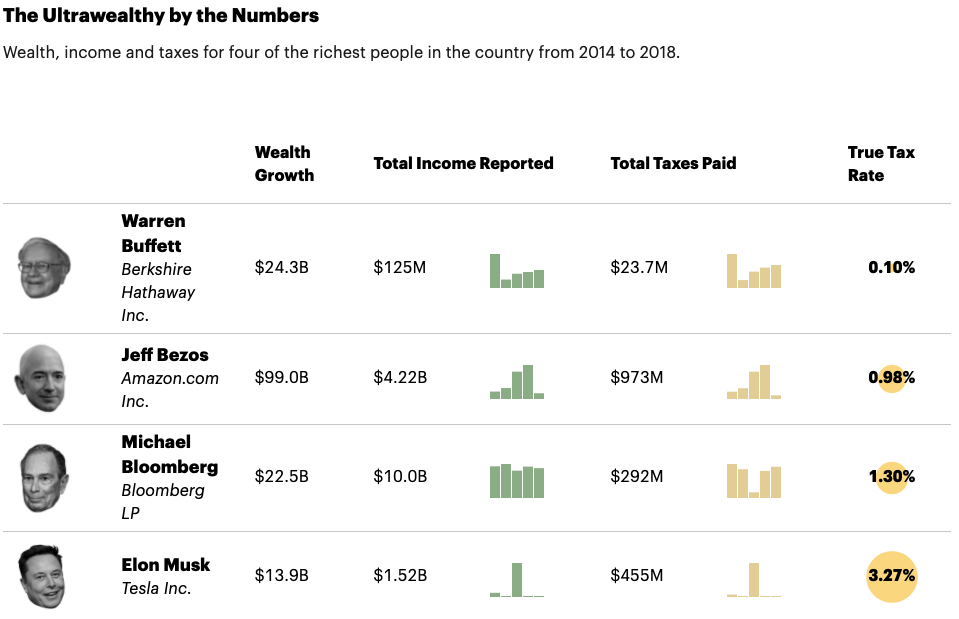 Many readers may have seen this bombshell ProPublica story this week, but if you didn’t, grab some popcorn and dig in.

ProPublica (somehow) gained access to a trove of complete tax information for thousands of the U.S.’s wealthiest people, covering 15 years. All of the usual suspects had their tax data reviewed: Gates, Zuckerberg, Buffet, Bezos, Musk, Soros, Murdoch, and so on down the line.

Months of detailed tax analysis resulted in a shocking, even if somewhat obvious conclusion: the ultra-wealthy pay far lower tax rates than everyone else. Sometimes, they pay no tax at all. One of the more head-spinning, egregious, outrageous examples was Jeff Bezos in 2011. That year, his net worth was $18 billion, but he reported losing money on his tax return—therefore owing zero federal income tax—and he even claimed a $4,000 child tax credit. Insanity!

ProPublica coined what they termed a “true tax rate,” which compares the amount paid in taxes with increases to net worth over the same period. As seen in the image above, the true tax rate for most billionaires is miles away from what 99% of Americans are paying each year.

The most disheartening feature of this story, however, is that none of these billionaires are breaking any laws or even bending any rules – everything they are doing to minimize their tax bill is almost always perfectly legal.

Highlighting inefficiencies in the U.S. tax code is not earth-shattering news for any of you readers. The tax code has spent decades becoming ever more complex, and the more complex a law, the more loopholes that exist. For the wealthiest Americans, these loopholes are worth tens of billions of dollars, and they can afford the best advisors to fully take advantage of them.

If we simply moved to a flat tax and injected a healthy dose of common sense into the wealth versus income debate, we could probably get to a better system where civil servants and teachers don’t have to pay higher tax rates than people like Bezos and Musk. Instead, the government’s solution time and again has been to add more rules to the tax code and to make it even more complex, which just gives way to more loopholes. In a sense, you can’t really blame the billionaires for the outcome—it’s an abomination of the elected government’s own making.

The Risk Hanging Over Hong Kong 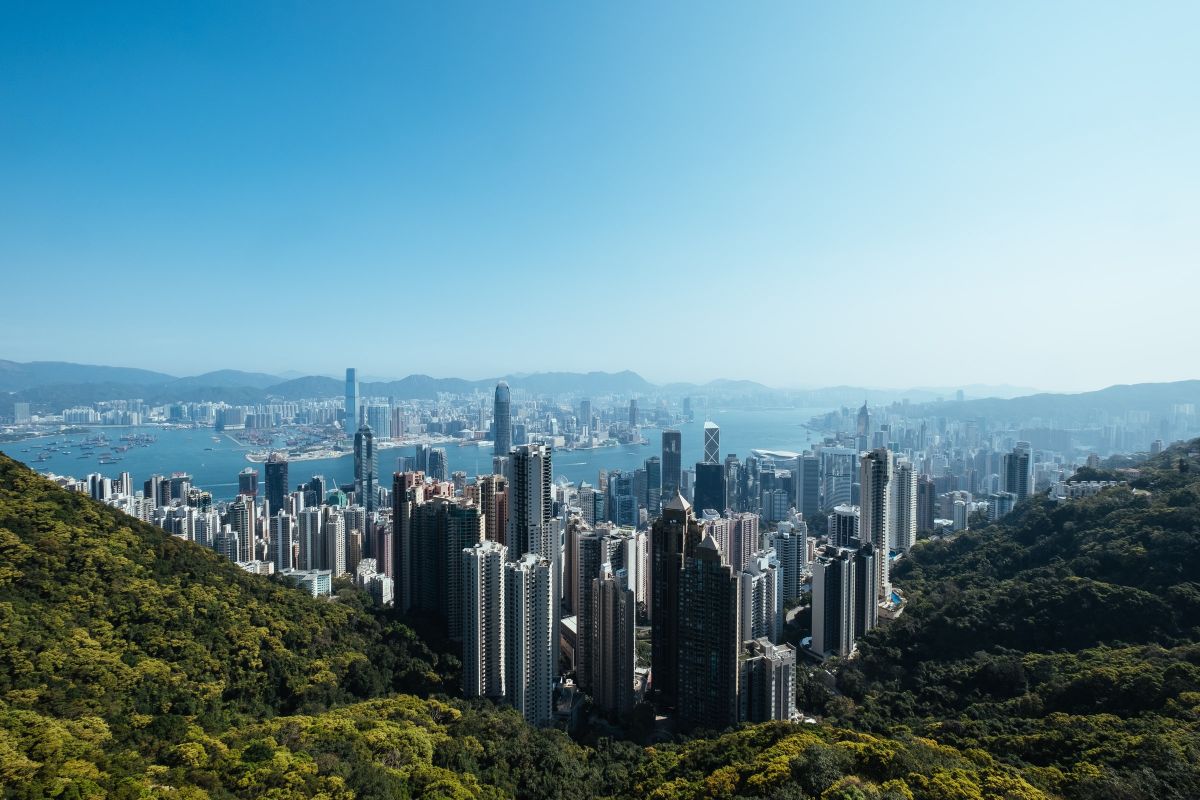 Hong Kong has been billed for decades as “Asia’s World City” – a modern, democratic hub with sophisticated financial systems, a British-style legal system, and a strong, global, and highly skilled labor pool. It was the city that bridged the East with the West.

Today, Hong Kong’s future looks less certain. Tensions with mainland China have existed since Britain handed the territory back over in 1997, but China’s creep has accelerated in recent years.

For much of 2019 and 2020, Hong Kong’s residents staged mass demonstrations against a Chinese-backed national security law that would grant China the power to intervene in Hong Kong’s legal system. Millions of Hong Kong residents took the streets defending their legal system and democracy, and thousands were arrested. China passed the law anyway.

China has also given its secret police capabilities to monitor dissention and enforce vague rules against Hong Kong’s cooperation with foreign governments. Few doubt that China will keep pushing to control the territory in other ways.

International companies are starting to hedge. Dozens have moved regional headquarters or offices out of Hong Kong since 2019, and a recent survey of members of the American Chamber of Commerce in Hong Kong showed 42% of 325 respondents stating they were considering or planning to leave the city. Commercial real estate vacancy rates are the highest in 15 years, with 80% of the vacant space surrendered by international firms. Of all the geopolitical crises facing the world today, Hong Kong’s fate makes the short list.

Tech Startups Burned Cash To Get Customers – Not Anymore 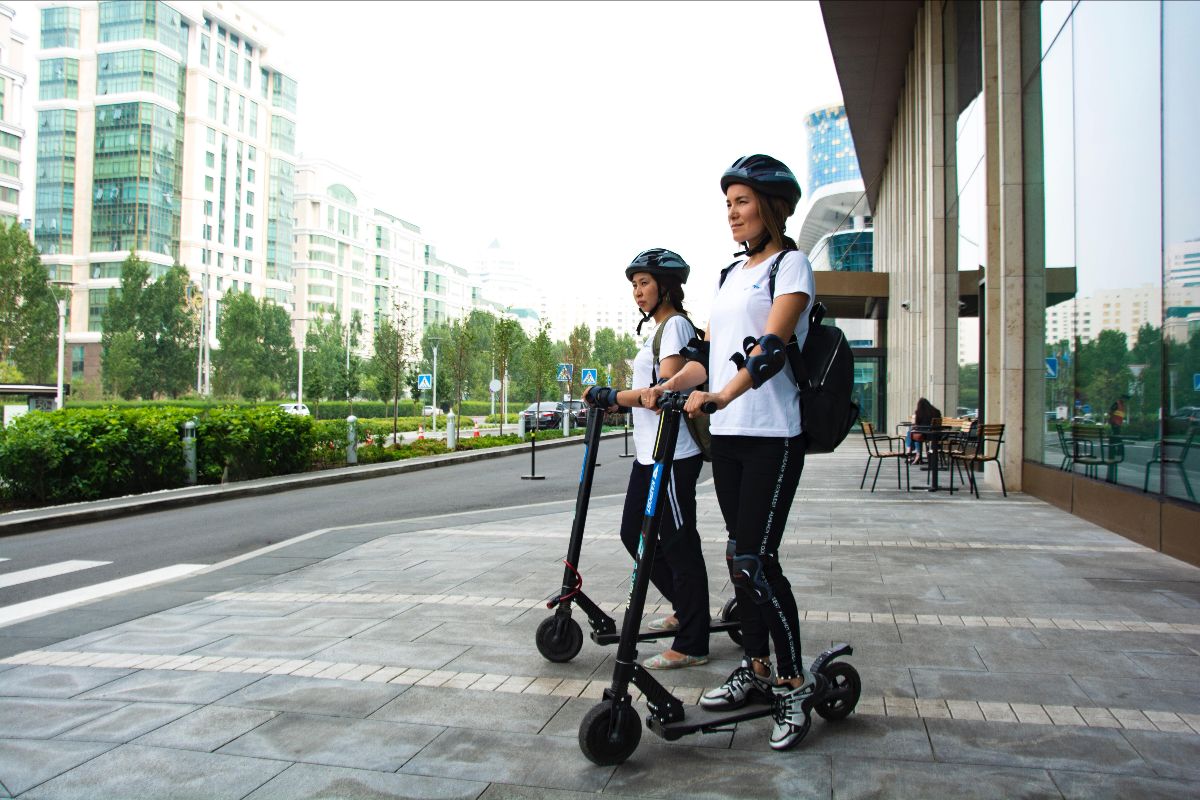 Both phrases are referencing a heyday era for tech startups, when companies like Uber, Air BnB, Instacart, and Blue Apron were literally paying people to become new customers.

Over the last decade, the ultra-low prices for new forms of personal transit, grocery delivery, and other tech-driven services were not necessarily the markings of hyper-efficiency or technology creating a natural glide to an optimal price. Rather, many low prices were the result of venture capital money quietly underwriting start-up losses, allowing new companies to lose money in an effort to build a scalable 'network effect'. The end user – in this case mostly millennials – benefited most from these subsidies.

The party appears to be ending. The average Uber and Lyft ride costs 40% more than it did a year ago, and popular food delivery apps have been pushing their fees higher over the same period. Data also shows the average daily rate of an Airbnb rental went up by 35% in Q1 2021 compared to the previous year. Scooter services like Bird have increased the price charged per minute by over 200%.

There’s an overarching lesson here when it comes to tech platforms and services – if it’s free or seems less expensive than it should be, there’s probably a catch.

How AMC Became The Peoples’ Stock 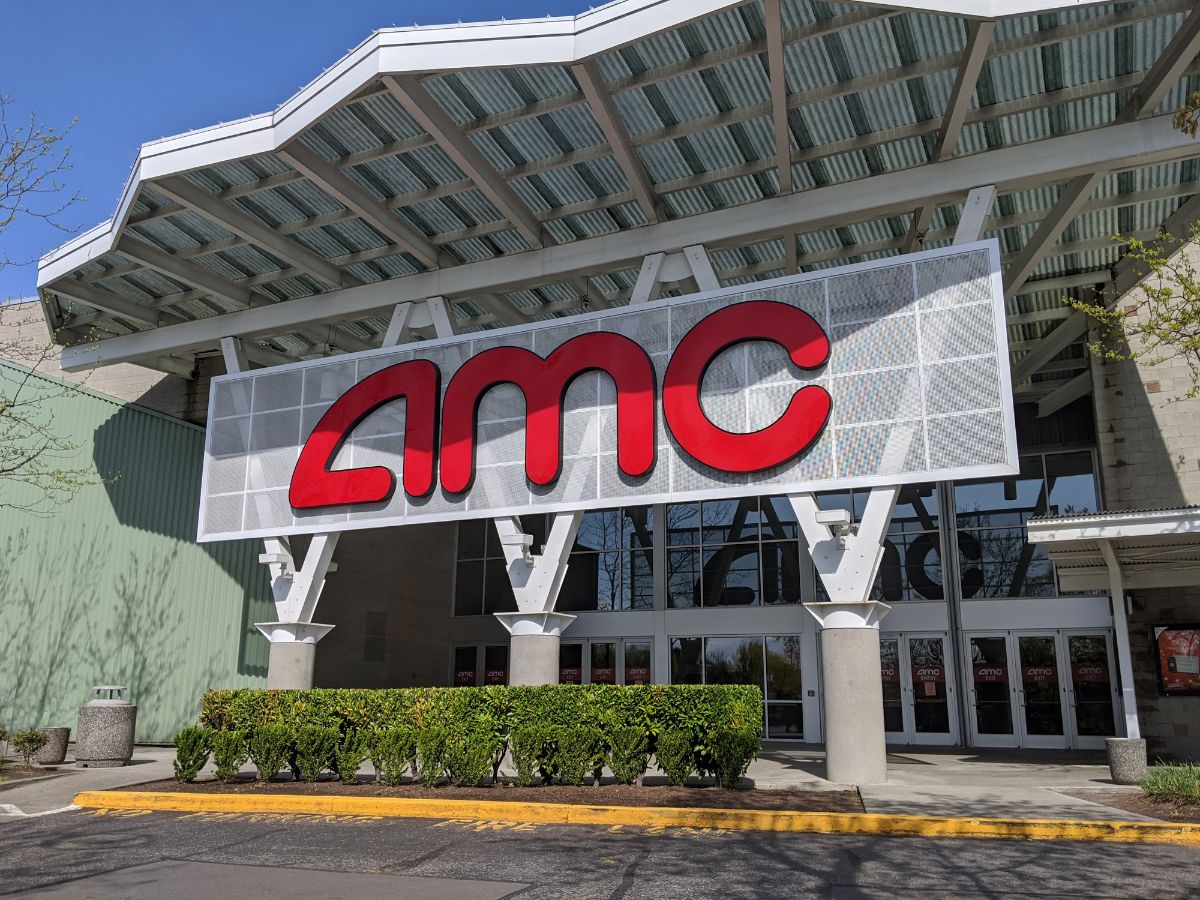 If GameStop was the original Godfather of “meme stocks,” AMC is delivering the sequel (pun intended).

For readers who may not be familiar with how “meme stocks” are marketed and made viral, this Tik Tok video shows an example of creative ways younger folks are sharing their “investment thesis” nowadays: https://www.tiktok.com/@andreaangiolillo/video/6968907341836160261.

AMC’s valuation is straight up silly. However, the management team is taking advantage of that in smart ways. The company has issued new shares multiple times throughout the meme frenzy for "general corporate purposes."

For instance, CEO Adam Aron, whose net worth has risen by $200 million this year, gifted 500,000 shares to his two sons in March, when their total value was around $7 million. Now, they have a combined $30 million worth of shares. Hopefully the boys wrote a nice thank you note on Reddit.

Around 80% of AMC's common stock float is presently owned by individual investors rather than institutions – and the #AMCArmy hashtag continues to trend on Twitter. It's fantastic to see interest in the stock market exploding, particularly among younger investors. That said, Mr. Market has been teaching newbie investors expensive lessons for centuries. Let's hope the next market dislocation doesn't permanently discourage too many of these folks. 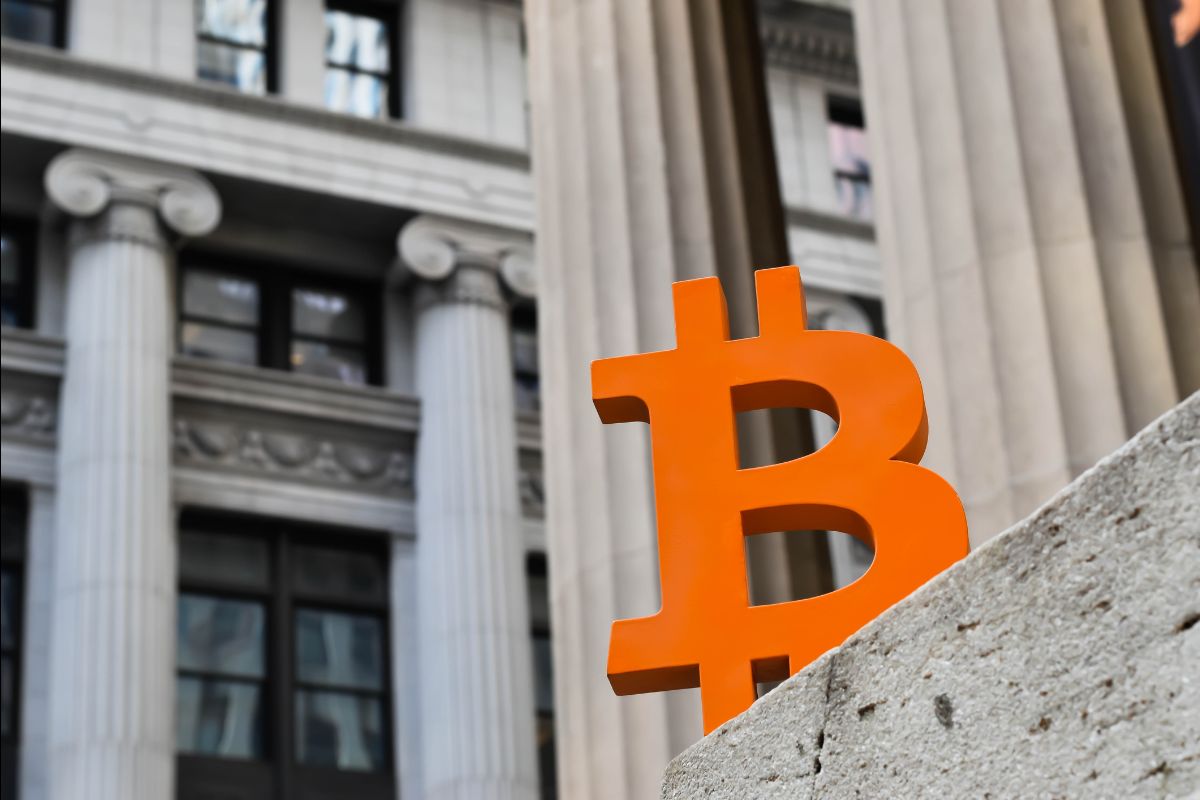 About a month ago, we wrote that crypto mania could give way to regulatory mania, which would muddy the investment outlook for coins. Well, the regulatory wheels are officially spinning.

In May, SEC Chairman, Gary Gensler – who taught a cryptocurrency class at MIT – urged lawmakers to pass a law regulating crypto exchanges. More recently, major hacks of the Colonial Pipeline and beef supplier JBS were settled by ransom payments in bitcoin.

Policy makers are losing patience, and the feeling that something needs to be done is increasingly bipartisan.

The regulatory push is also happening on a global scale. Just this week, the Basel Committee for Banking Supervision – which is a group of global central bankers including the Federal Reserve – proposed a strict rule requiring banks to apply a 1,250% risk weight to bitcoin. In short, a bank would need to set aside at least $100 in cash for every $100 in bitcoin, essentially deeming the cryptocurrency a worthless asset.

Regulatory efforts against cryptocurrency are in the very early stages, but the direction seems abundantly clear.

We came across a neat product recently called Frameo.

The best way to describe Frameo is with an example: say you are on vacation and want to share a family photo with the grandparents. With the Frameo app and picture frame, you can snap a photo anywhere in the world and have it appear instantaneously in a frame at grandma and grandpa's house.

Seems like a fun way to share photos without having to text or email, and it allows loved ones to stay freshly connected with basically no effort.

Check out the product: Frameo