Submitted by Silverlight Asset Management, LLC on May 15th, 2021

We are pleased to be back this week with a new edition of 5 Things.

From the start, 5 Things has been a collaborative effort between Michael Cannivet and Ed Flores. Ed is a former colleague from Fisher Investments who now runs his own company, Hyde & Union Content. Ed has had a lot going on lately, including moving to a new state and receiving news he’s about to become a father for the first time.

During the recent hiatus, Michael has stayed busy with other writing projects, including Silverlight’s Q2 2021 Investment Outlook, new articles for Real Clear Markets and Forbes, and starting to write a book for Forbes! The book, scheduled for release in December, will be about a unique framework for retirement planning.

As many of you know, Michael started writing for Forbes in 2017.  This year, he is thrilled to be taking another step forward in the relationship. For over a century, Forbes has been the defining voice of entrepreneurial capitalism; a global media leader that champions success by celebrating those who have made it, those who aspire to make it and those who help others make it. It's an honor to become a Featured Author for such a well-recognized and storied publication.

With those updates now out of the way, we can turn our attention to capital markets, where there has been no shortage of news lately.

The S&P 500 declined 1.4% this week as inflation became more of a buzzword. U.S. consumer prices jumped in April by 4.2% from a year earlier, the biggest 12-month increase since 2008. Since April 2020 was the first month to be heavily influenced by the pandemic, base effects play a key role here. But a more telling increase was the March to April 0.9% jump in the core inflation index, which is the biggest monthly increase since 1981. We dive deeper into the inflation topic below.

The April jobs report baffled many market watchers, who were expecting 1 million new jobs but only got a seasonally adjusted 266,000. Interestingly, the number of job openings grew in April, with job postings sitting 24% higher than they were in February 2020. Why so few hires? The question sparked debate in the economic and political spheres, with some citing lack of child care, overly generous unemployment benefits, and businesses not paying attractive enough wages. Whatever the reason, 44% of small-business owners reported job openings they could not fill in April, which was the highest reading since the 1970s.

Bottom line: if someone in America really wants a job, they can find one. Amazon said Thursday they are hiring 75,000 more workers and offering $1,000 signing bonuses at some locations; McDonalds is looking to hire 10,000 new employees over the next three months; Chipotle and other restaurants are reporting needs for tens of thousands of workers as they restore indoor seating.

Inflation Shouldn't Be A Surprise To Anyone 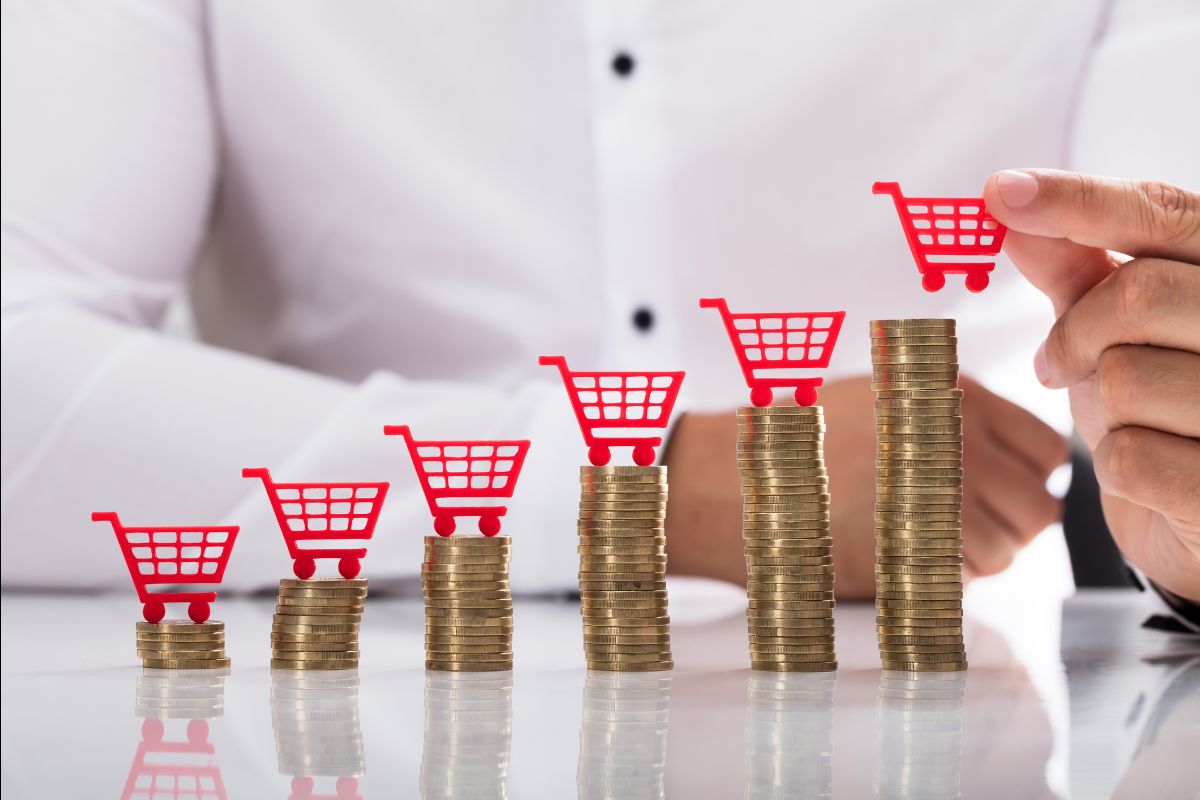 We have written many times about looming inflation pressures. So when the consumer price index (CPI) and producer price index (PPI) both surprised to the upside this week, we were not surprised. The inflation trend has been brewing for many months.

The real question is not whether the economy will experience more inflation—it already has. The question is whether inflation is "transitory" (as Federal Reserve officials claim), or if we’re facing a longer-term problem. We think it could be a little bit of both.

Clearly, we are seeing some price pressures as the economy shifts back to being fully reopened. Consumers are vaccinated, confident, and armed with stimulus checks. Higher demand is bumping up against sluggish supply, low inventories, etc.

The housing and auto industries are examples of what happens to price as a result—the median sales price for existing single-family homes rose in 182 of 183 metro areas in Q1. For the first time ever, the average price paid for a used car rose above $25,000. These are not just anecdotes—there are similar examples of surging prices everywhere.

From an investment perspective, it's clear that inflation concerns are now becoming widespread. Any time we see a very widely discussed fear or worry, that is usually a sign that it’s pricing power is diminishing. The more people worry about it, the less it ultimately matters.

In Silverlight managed portfolios, we have begun taking profits on some of our ‘reflation’ plays. 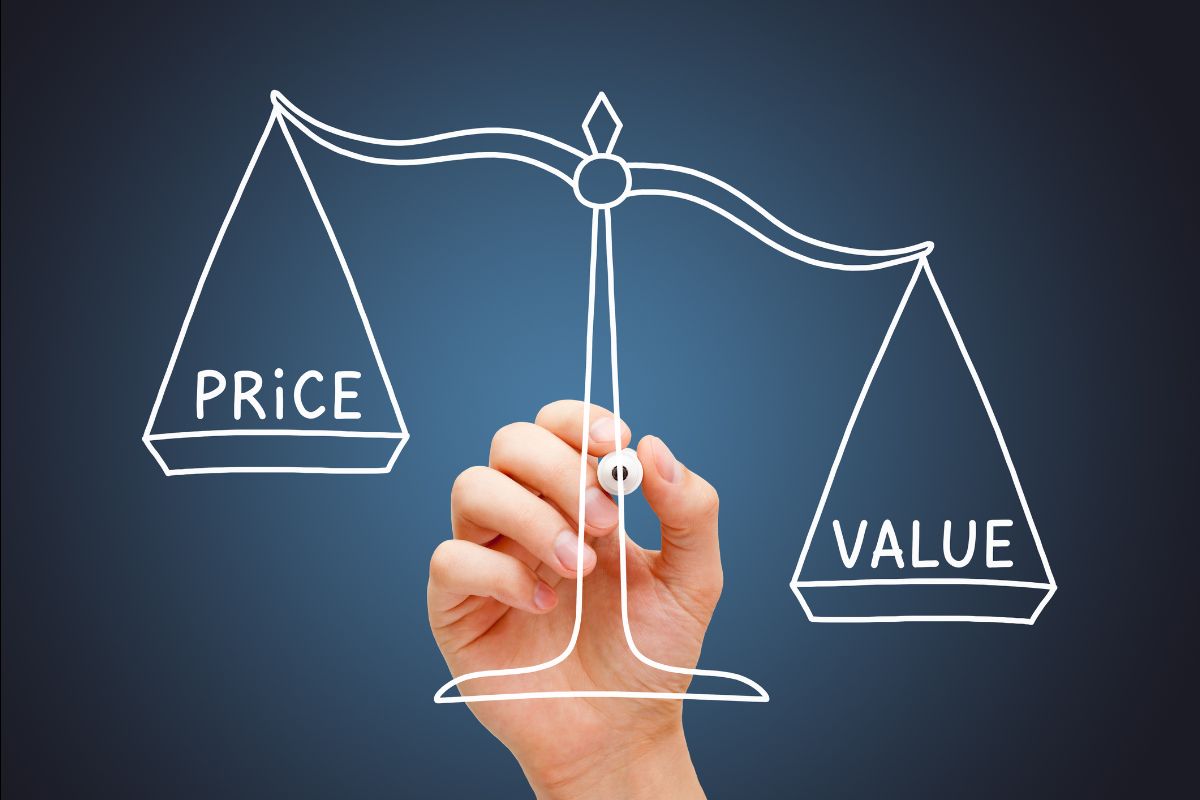 If you’ve been wondering lately whether stocks are overvalued and/or the market is running too hot, you’re not alone. It’s a smart question to be asking right now.

We think investors should be thinking about valuations in a few different ways.

1.  Equity valuations should be considered relative to other asset classes.

U.S. stocks are expensive when viewed in a historical vacuum. But when you compare equity valuations side-by-side with bonds, cryptocurrencies, real estate, and many other assets, the picture changes. Virtually all risk assets have been inflated by excess liquidity, but equities are better situated in an inflationary environment because pricing power enables growing earnings.

2.  Just because the S&P 500 is expensive, doesn’t mean every equity strategy needs to be.

Below are comparative valuations for Silverlight's three managed strategies versus the market. On average, we own companies with above-average profitability, low debt, and all three portfolios trade at reasonable multiples based on trailing earnings. Given how much earnings growth is expected this year, the portfolios look reasonably priced on forward multiples.

U.S. stocks are not the only game in town, but that fact is often lost in financial media narratives. Domestic shares are currently much more expensive than foreign shares, which adds to the argument that not all stocks are dangerously overvalued. A number of high quality firms from developed markets outside the U.S. presently offer dividend yields exceeding 3%.

A Bull Market In Thematic ETFs 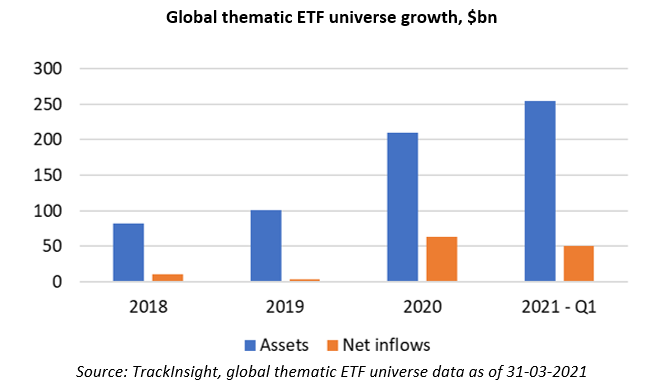 Sector and trend-specific ETFs are nothing new. But issuance and inflows into new thematic ETFs is reaching new heights, in an apparent response to surging investor demand. In Q1 2021 alone, inflows into thematic ETFs were approximately $50 billion, which is just shy of 2020’s full-year total. More ETFs debuted last year in the U.S. than at any point in the last decade.

In our view, this hot corner of the market is more evidence that there is too much liquidity floating around. Story stocks don't fare well forever. Many investors are about to learn the hard way why fundamentals are the most important driver of long-term performance. Case in point: Goldman Sachs tracks an index of "Unprofitable Tech" firms, and that group has underperformed the market by 42% over the last three months.

Crypto Mania May Give Way To Regulatory Mania 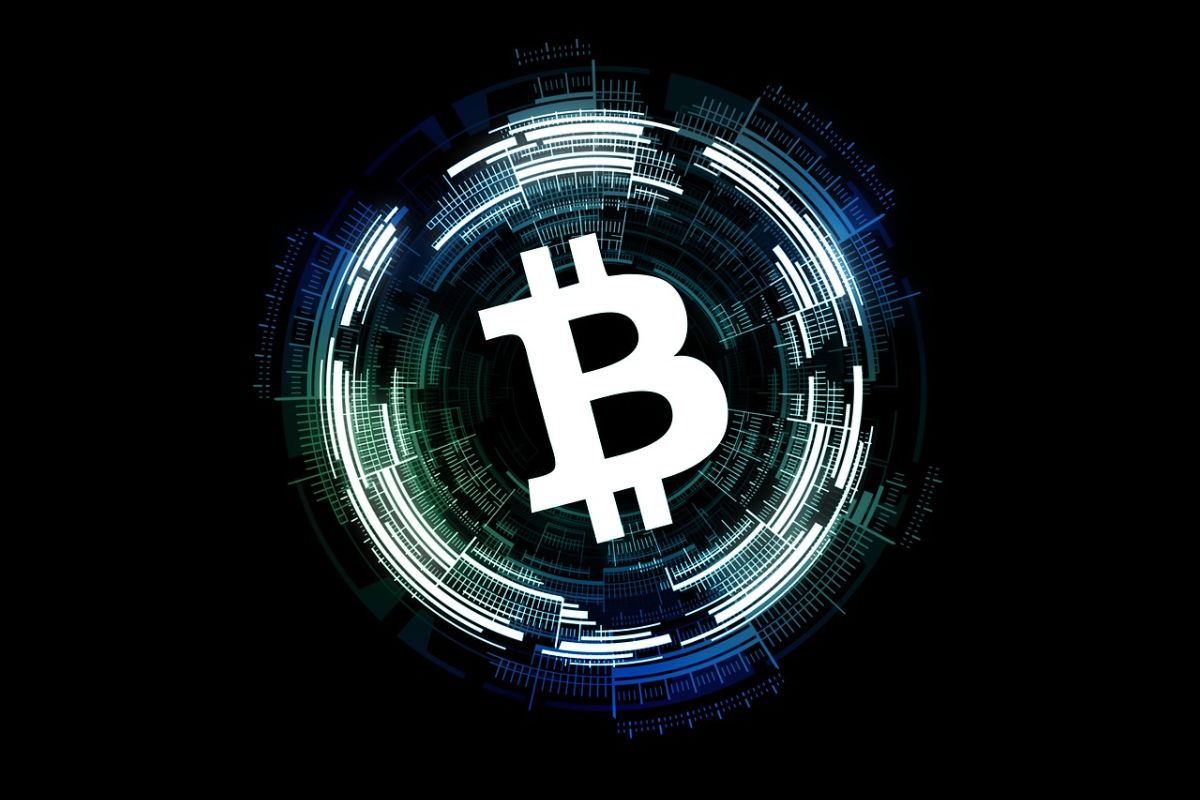 The cryptocurrency mania continues apace, but regulatory headwinds are also growing at a rapid pace. Just last week, the Internal Revenue Service won two key court cases in Boston and San Francisco, allowing the agency to force crypto exchanges to hand over customer data with transactions greater than $20,000. The IRS’s goal is to pursue cryptocurrency investors who haven’t paid their taxes.

In the regulated world of brokerage firms and custodians, reports of stock sales and transactions are sent to the IRS for tax compliance. But such reporting is still sparse in cryptocurrency exchanges, which has made it attractive to criminal enterprises and tax evaders. With the IRS’s evolving policy and newfound pursuit, a reckoning may be coming.

Elsewhere, the Department of Justice and the IRS are also investigating the cryptocurrency exchange called Binance, according to Bloomberg. The investigation centers around whether Binance allowed U.S. investors to make illegal trades on its platform. Namely, trading derivatives tied to digital tokens, which is only allowed via firms registered with the U.S. Commodity and Futures Trading Commission.

Regulation is a long and winding road, but markets tend not to like it as an overhang.

Couples Are Wooing Each Other With Stock Shares Instead of Flowers 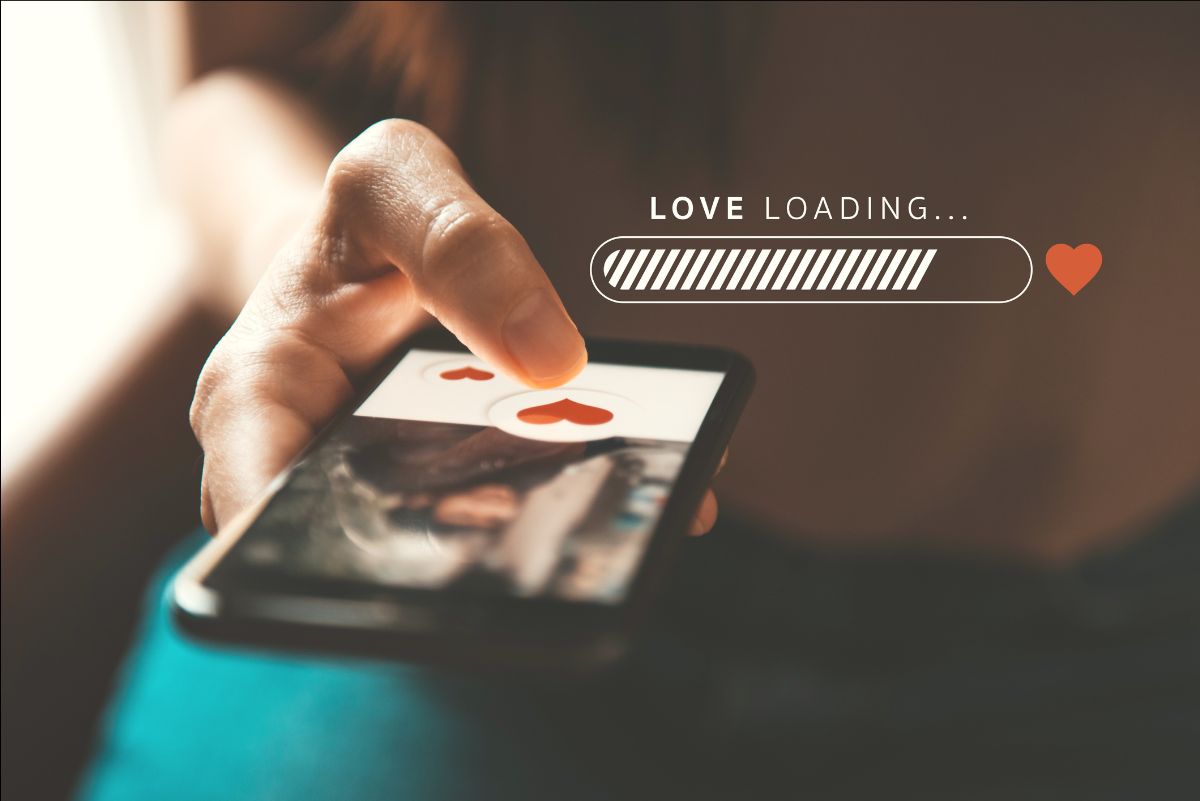 Market excesses have been a theme of this week’s 5 Things, so here’s one more: in South Korea, young couples are courting each other with shares of stock. So much for dinner and a movie!

The trend started last Christmas, when the investment bank Shinhan Investment Corp started listing “stock gift cards,” selling fractional shares of popular stocks like Tesla, Apple, Netflix, and Starbucks. Much like Robinhood in the U.S., young investors are lured by clever ads and notions of investing at a low cost.

Shinhan Investment Corp sold more than 20,000 of these stock gift cards in Q1 2021, with most buyers in their 20s and 30s. This micro-trend reveals some interesting sentiment signals, in our view. Clearly, young investors think there is little-to-no downside in these stocks (otherwise, why would you gift it to someone you’re courting?). But there is also a cultural takeaway—certain stocks are seen more as status symbols than as partial ownership of businesses where fundamentals matter.

Stress Kills, So Keep It In Check

Study after study show a common thread: chronic stress is a contributing factor in many of the leading causes of death in the U.S., from heart disease, to cancer, cirrhosis, and lung disease. It is in our best interest to keep stress in check. Technology can help.

Swiss researchers are currently designing a wearable sensor that can measure levels of cortisol—the stress hormone—in human sweat. If your stress levels are running too high, the device may be able to warn you, which should spur you to de-escalate and relax.

Knowing you are stressed is only half the battle, however, so the technology has limitations. We also need to understand what we can do to reduce stress in our lives, whether that means going for a walk, a bike ride, spending some time in nature, or engaging in meditation practices.

Learn more about the Swiss research.