Tech Stocks Will Probably Lag In The Next Bull Market

Tech Stocks Will Probably Lag In The Next Bull Market 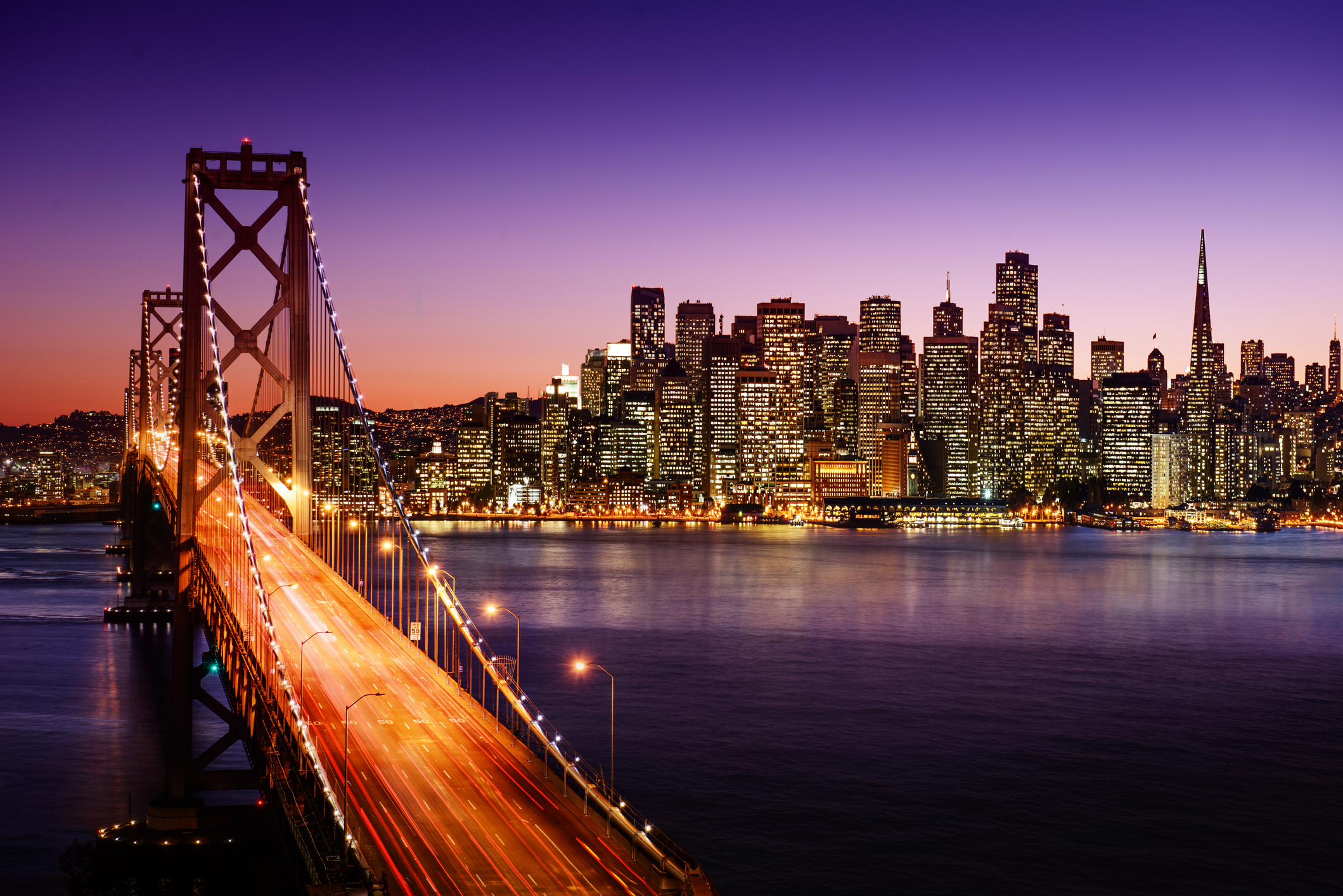 It’s been a long December for technology stocks.

The Nasdaq has fallen 8% this month and is down 32% year-to-date. That puts the tech-heavy index on pace for the worst December drop since the dotcom bubble burst twenty years ago. 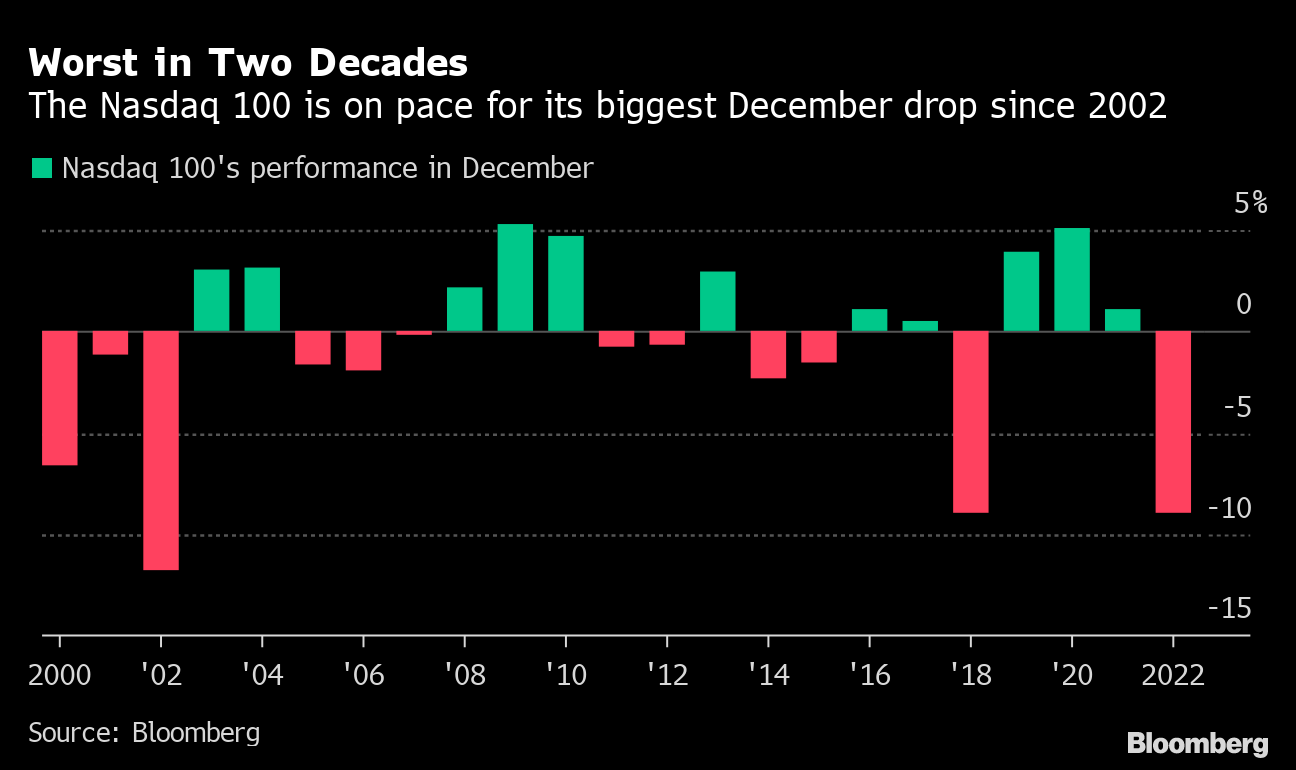 First, there is an unfavorable macroeconomic backdrop with economic growth decelerating globally. When GDP has slowed historically, so has the relative performance of economically-sensitive technology shares.

Second, there is the hawkish policy stance of the Federal Reserve. Interest rates have risen sharply this year, which has led to valuation contraction in the most richly valued companies—many of which reside in the tech sector. For context, the Russell 1000 Value Index is only down 8% year-to-date, whereas the Russell 1000 Growth Index is down 29%.

In 2023, will similar macro and monetary forces continue to pressure tech shares? Time will tell, but the fundamental outlook isn’t inspiring.

The S&P 500 Information Technology sector currently trades at 21 times forward earnings, compared to a 17 times multiple for the broader S&P 500. It might make sense to pay a 23% premium for tech if the sector’s fundamental momentum was superior. But that’s not really the case.

Furthermore, tech investors face another important headwind that’s seldom discussed, and that is: bull market leaders often become laggards in the next cycle.

Over the last thirty years, US equities have experienced three major bull markets. Interestingly, the top three sector leaders have rotated with each passing cycle. 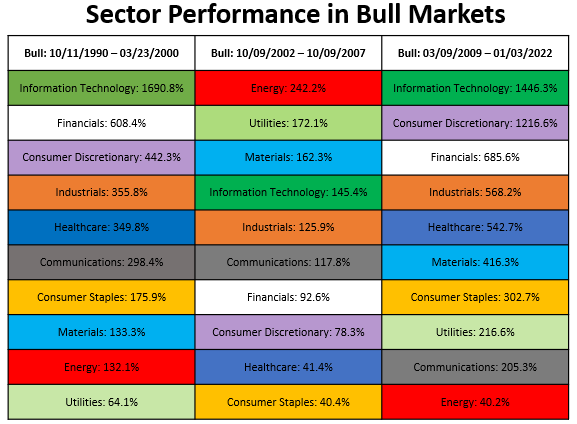 First, there was the 1990s bull market, led by the Information Technology sector’s blistering +1,690% price return. Second and third place finishers in that decade were Financials (+608% and Consumer Discretionary +442%).

The bull market that lasted between 2002 to 2007 saw new leadership. That cycle particularly favored investments into natural resources. The top three sector performers were Energy, Utilities, and Materials.

Why Does Sector Leadership Change Every Cycle?

There are both fundamental and psychological reasons that drive sector rotation.

On the fundamental side, it’s important to remember that every business cycle ends, eventually. In the bull phase, the hottest sectors usually see overinvestment, which causes companies operating in the sector to trade at relatively higher valuation premiums. Much of that overcapacity and valuation premium evaporates during the bear market, but both forces can linger for years and still weigh on a sector’s secular return profile.

On the psychological side, it’s important to remember that all investors have a ‘loss aversion bias'—meaning we detest losses more than we enjoy proportionate levels of gains.

After a bear market, many investors fight the last war well into the next cycle. They remember which sectors and stocks hurt them most, and try to avoid repeating those same mistakes. Sectors that were major beneficiaries in the bull cycle usually end up over-owned. When the cycle turns, these sectors then become prime sources of cash as investors become more defensive during the bear market.

For example, dot com companies became a laughing stock after the Tech Bubble burst in 2000. And many commodity producers endured a lost decade of meager returns between 2010 to 2020.

So far this year, the S&P 500 Technology sector is down 28%. Many tech bellwethers, such as Tesla, are down much more (i.e. 65%). The magnitude of these losses will leave a stinging sensation that lingers in investors’ minds for years to come.

Which Sectors Are Poised To Become New Leaders?

We are presently in the first sticky bear market since 2008. Nobody knows where or when the precise market bottom will occur.

What we do know, however, is that every bear market in history has been followed by a bull market. So, rather than make haphazard predictions about when the economy will go into recession, or guessing when the Fed will cut interest rates, investors would be better served to make sure their portfolio is positioned well for the next bull market.

Currently, I’m running a barbell portfolio for clients. Since economic growth is likely to remain challenged through the first half of next year, I think it makes sense to play defense by overweighting recession-proof sectors such as Health Care, Utilities and Consumer Staples. Based on history, those sectors should hold up relatively well through the remainder of the bear market.

Once we cross over into the next bull market, I want cyclical exposure outside of my defensive sectors to complete the barbell. Since the Technology, Consumer Discretionary, and Financials sectors led during the previous bull market—and we know the top three don’t usually repeat—I want to look outside of those sectors.

I think the 2020s will be a reflationary decade that favors firms with tangible assets. Sectors that lagged in the last bull market and now seem like logical outperformance candidates for the next cycle include Energy, Materials, and Industrials.

To fund the overweight exposures in our portfolio, we’re very underweight the tech sector. Despite this year’s turmoil, the tech sector still represents over 20% of the S&P 500. This could be problematic for passive investors, but it gives active investors a lot of capital they can redirect to other more promising sectors.