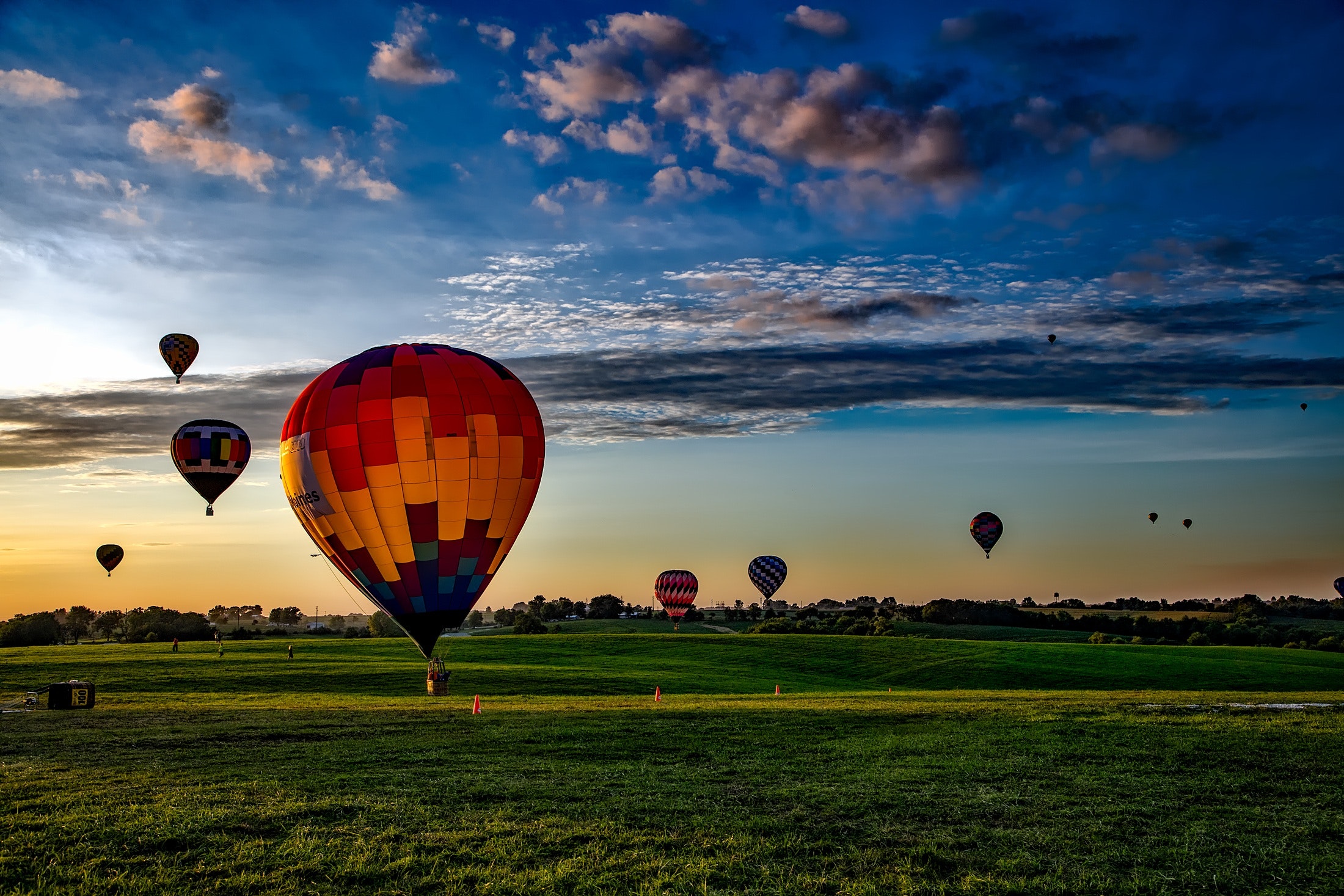 The odds anyone dies on Independence Day are just 1 out of 365. But two of America’s Founding Fathers, both pulling the same pinball? On the same day, in the same year?

Another interesting fact: 3 of the first 5 U.S. Presidents passed away on the Fourth of July. The third was James Monroe in 1831.

While not as eerie, it’s at least ironic that former Fed Chair, Paul Volcker, passed away in 2019—the same year Businessweek ran a provocative cover story regarding his former nemesis—inflation. 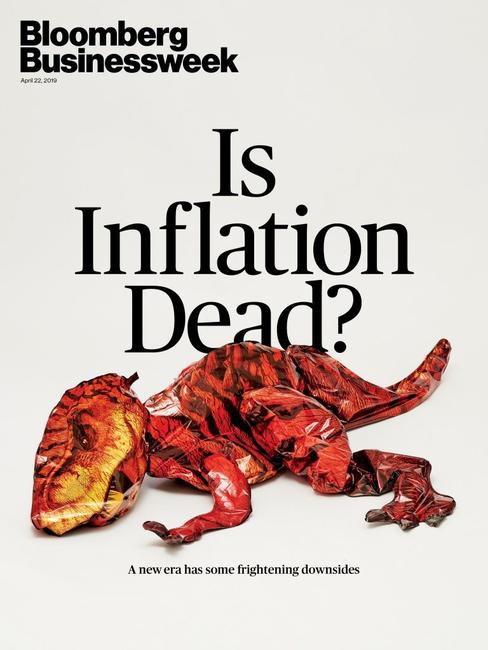 In April, when Businessweek ran a story questioning inflation’s demise, it set off a contrarian alert. Many compared it to a now infamous cover from 1979. 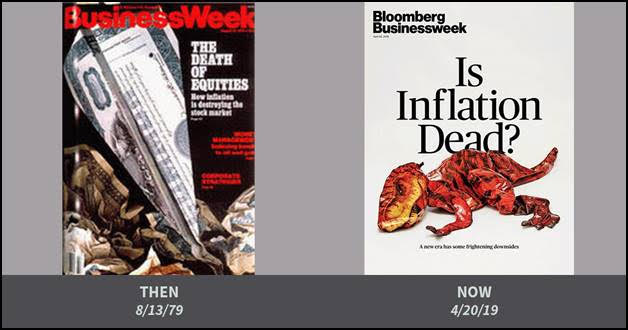 The very same month BusinessWeek proclaimed, “The Death of Equities,” Paul Volcker was appointed chairman of the Federal Reserve.

Equity market sentiment was in the gutter. Inflation had averaged 7.1% in the 1970s—more than double the previous decade. Rising inflation weighed on equity valuations. The Dow Jones Industrial Average, which traded near 1,000 in 1966, finished 1979 at 838.

In 1979, consensus didn’t care that the Dow’s dividend yield was 6%. Nor did consensus care that P/E ratios were the cheapest in 45 years.

There wasn’t much appetite for fixed income, either. Bonds were widely dubbed: “certificates of confiscation.”

Precious metals and commodities were the popular investments people discussed at cocktail parties.

Then Paul Volcker came along.

Mr. Volcker was apolitical. To promote a more stable economy over the long run, he mustered the courage to do the hardest thing in the world for any central banker—he raised interest rates. A lot.

The rest, as they say, is history.

Earlier this month, Jason Bloom, an Invesco strategist, was speaking to around 150 financial advisors. He polled the room to see who how many were concerned about inflation. Not a single hand went up.

“I almost sprinted back to my desk to buy TIPS,” he told Bloomberg.

Bloom appears right based on fund flows. Despite a sharp rise in equity markets this year, fund flows have still favored bonds. According to Refinitiv Lipper, individual investors are slated to withdraw over $135 billion from equity funds and ETFs in 2019, the most since 1992. Conversely, bond funds and ETFs will likely to see record inflows exceeding $250 billion.

Much of the demand for bonds is based on demographics. It’s no secret Baby Boomers are aging, and with that comes a desire to rotate toward a more conservative asset allocation. However, bonds have risk too, including inflation.

Here are reasons why inflation may surprise to the upside next year.

Base effects. Many of 2019’s market trends relate to how 2018 ended. Risk assets were aggressively sold in Q4 2018, as a deflationary chill spread across the global economy. That created a low hurdle for subsequent data.

Inflation is reported on a rate of change basis, and several of the forces that caused inflation to slow last year are likely transitory. For instance, energy and many other commodities will likely exhibit double-digit year-over-year gains over the next six months. There is a tight correlation between commodity prices and inflation gauges.

Weakening dollar. One thing RCM Editor, John Tamny, has taught me is that U.S. Presidents get the currency they want.

Most of President Trump’s tweets, such as the one below, argue in favor of a weaker dollar. 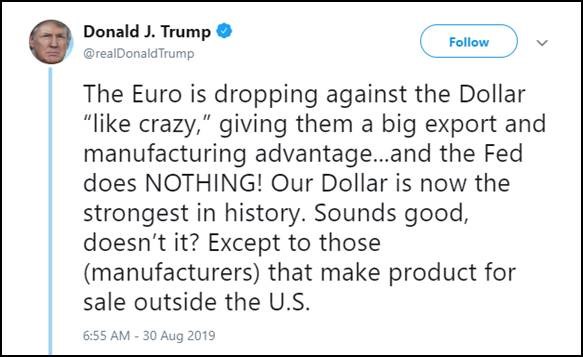 Technically speaking, it looks like the dollar is in a bearish trend. Since the end of September, the dollar has registered a series of lower highs and lower lows.

Perhaps the President is getting what he wants?

The manufacturing slowdown has weighed on the economies of several key election swing-states. If the dollar stays weak through next November, the President’s re-election odds likely go up.

Another thing that would likely go up under that scenario is inflation, because commodities are priced in dollars. 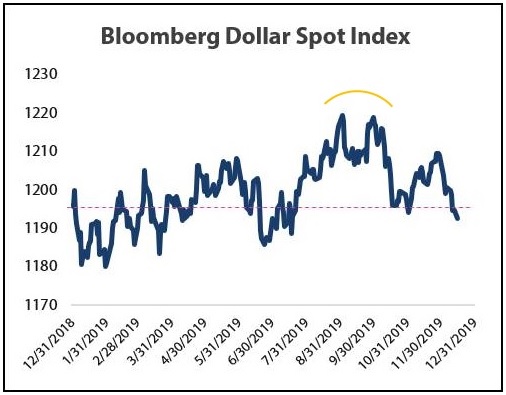 Price discipline returning to Silicon Valley. Aftershocks from the WeWork debacle are still reverberating through the Valley. Gone are the days of unicorns easily gobbling up market share by undercutting established rivals’ prices.

“Profit” isn’t yet a buzzword in Silicon Valley, but it’s becoming more of a priority. Cash-strapped unicorns will try to raise prices to avoid future funding squeezes. If that becomes a broader theme in the tech/consumer space, it could help nudge inflation higher.

Vital signs vary depending on how you measure, but inflation is certainly alive. And we don’t need to see a dramatic rise in inflation for performance trends to change.

If you’re a retiree and want to protect your purchasing power, now is a good time to sanity-check your asset allocation. The percent you allocate to bonds should not go up blindly based on your age. Interest rates and the inflation outlook should also factor into your positioning.

Meanwhile, rumors of inflation’s permanent demise have also created pockets of opportunity in the equity market. On a rolling three-year basis, the S&P technology index has outperformed energy by almost 100% - the widest gap in 20 years.