Pandas Are Returning To China, But The Trade War Is Here To Stay

Pandas Are Returning To China, But The Trade War Is Here To Stay 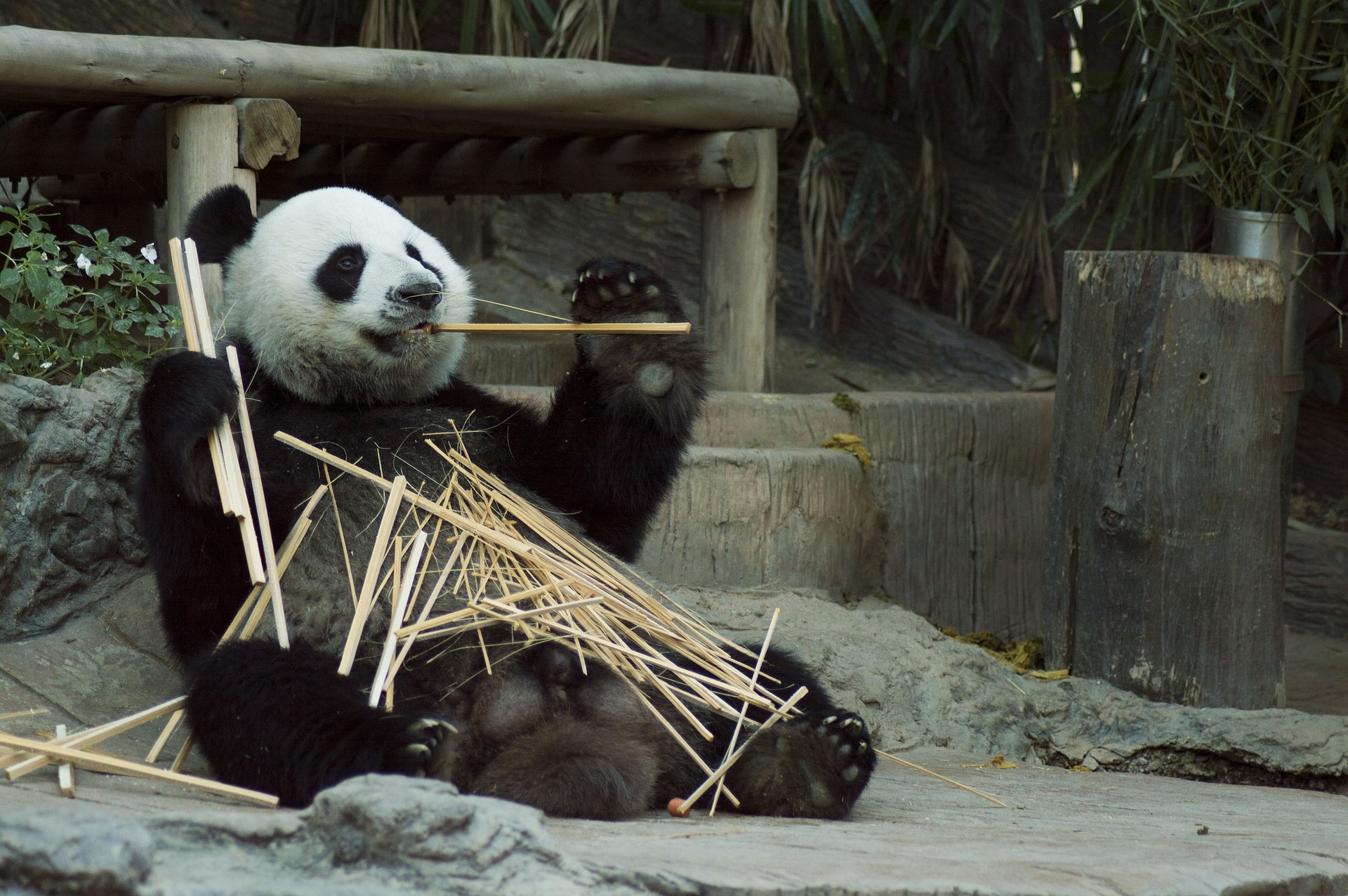 Markets cheered when the Trump Administration announced on Tuesday it would delay new tariffs on certain consumer products. Optimism quickly evaporated on Wednesday, though, after a spate of weak economic data stoked fears of a global economic slowdown.

It’s a great illustration of why markets are volatile right now. It’s all about one word: uncertainty.

Investors are in an environment where at any moment a policy announcement may cross the tape and produce a big swing in their portfolio. Meanwhile, economic risks that have been quietly lurking in the background, are now suddenly growing much louder.

Which have you been paying more attention to?

If trade has monopolized your attention lately, I’d encourage you to spend less time on that, and more time getting up to speed on the fundamentals most relevant to whatever assets you own.

It's important to note that the frictions that are happening between the U.S. and China aren't just, 'How much is a pair of sneakers going to cost when we buy them from Walmart…

This is about intellectual property theft. It's about industrial espionage. It's about resetting our relationship with a China…

We can't get lost in the bigger picture here, and it is the incompatibility of two economies butting heads with one another in their cultural differences.

In other words, the trade war is about big, secular issues. Stuff that won’t be solved quickly or easily.

Rather, the U.S. and China trade dispute will be a protracted affair, and investors should plan accordingly.

China Is Playing A Long Game

It is important to understand that China has one major long-term goal—becoming a hegemonic force on the global stage.

China’s Belt and Road Initiative (BRI) is a clear example of China’s long-term ambition. Since 2013, over 100 countries have expressed interest in working with China on projects to enhance trading routes reminiscent of the ancient Silk Road. The World Bank estimates $575 billion will be invested in railways, ports and roads.

In just the first half of this year, Commerce Ministry data show China signed about $64 billion in new construction and infrastructure contracts, a 33% increase compared to 2018.

Ironically, the trade war may be stimulating interest in the BRI across Emerging Asia. A few years ago, Malaysia and Indonesia rejected proposals for expensive rail projects, owing to concerns about a potential debt trap. Both countries recently changed their mind and got onboard. Turns out, global trade stalling to the lowest levels in a decade has increased the appeal of infrastructure spending.

Another key aspect of China’s long-term plan relates to its currency. China has depreciated the yuan to counteract the impact of U.S. tariffs. But don’t expect China to let the yuan freefall anytime soon. They want the yuan to be increasingly viewed as a stable reserve currency, and don’t want near-term friction with the U.S. to jeopardize that longer-term vision.

China is playing a patient and deliberate game, led by a President with a lifetime appointment.

The U.S. Is Playing A Shorter Game

Political leaders in the U.S. operate with a shorter time horizon, because they must get re-elected.

President Trump will make trade a focus of his re-election campaign, since his approval rating tends to rise during trade flare ups. 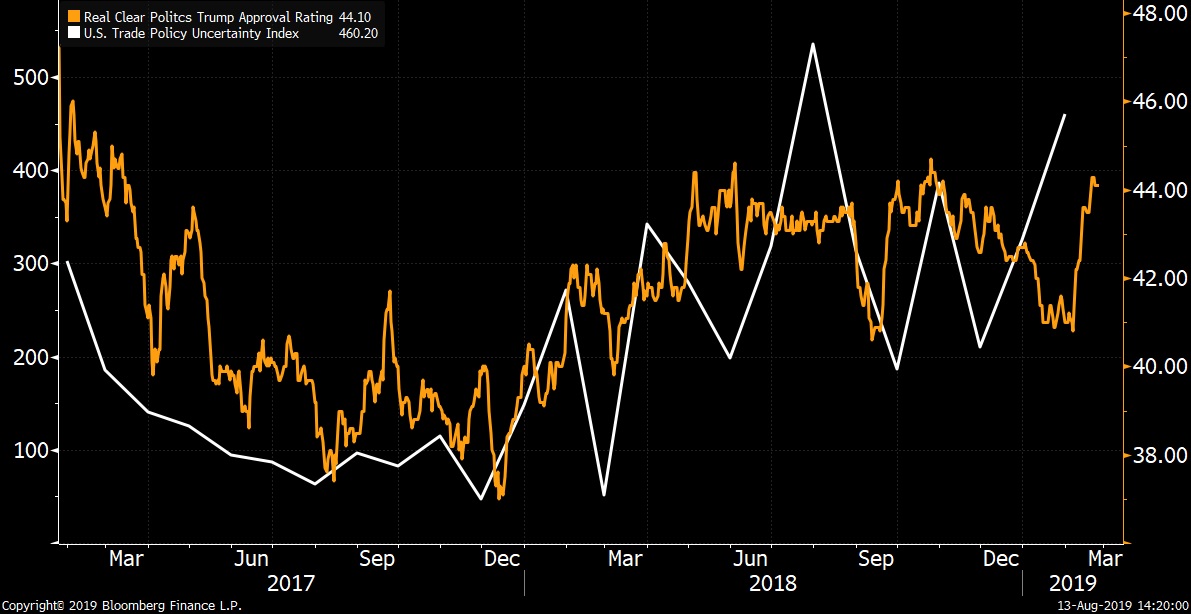 Whether or not trade remains a winning issue for the President, will likely depend on how much collateral damage is inflicted on markets and the economy between now and Election Day.

The best thing Washington can do for the business community is set clear rules and get out of the way. Sadly, the current reality is far different.

Trade uncertainty is taking a psychological toll on C-suite executives, curtailing business investment. When a CEO must contemplate random tweets that could disrupt a critical supply chain relationship or block access to a market, they’re naturally inclined to tread carefully.

Markets also abhor uncertainty. That may help explain why U.S. stocks have gone nowhere for over a year and a half. The New York Stock Exchange—a broader benchmark than the S&P 500 or Dow, peaked in January 2018 and is 8% under the previous high.

P/E ratios are a proxy for investor sentiment. Will P/Es rise as we approach the election? Or will policy uncertainty cause P/Es to fall even more?

And what about corporate earnings?

“Nothing goes in one direction forever… Cycles always prevail eventually.”

What could those two things possibly have in common? Both involve loans where China is systematically reducing exposure.

It’s no secret China owns about 5% of the $22 trillion U.S. national debt. Or that China has been steadily trimming its treasury holdings since 2012.

Meanwhile, China has also been quietly reducing the number of pandas it loans to the U.S. That is a subtle yet important signal that China does not perceive the U.S. to be a longer-term ally.

‘Panda Diplomacy’ is a term that describes China’s longstanding practice of using its giant pandas in diplomatic relations. Per a Financial Times article, “For China, pandas are the equivalent of the British royal family. You trot them around the world and they add an enormous amount to the country’s soft power.”

A few years ago, researchers at University of Oxford wrote a paper chronicling China’s pattern of offering pandas to its trading partners, often shortly after major trade agreements.

For instance, the U.S. lost two American-born panda cubs in 2010 after President Obama ignored China’s objections and met with the Dalai Lama.

Earlier this spring, it was announced the last of two giant pandas living at the San Diego Zoo would be returning to China. Bai Yun, a panda born in 1991, was part of an original cohort of bears that came over in 1996 as part of a long-term loan agreement.

Back then, the U.S. and China were on favorable terms. But that was then, this is now.

"China values pandas as their number one animal," says Suzanne Gendron, director of Hong Kong's Ocean Park Conservation Foundation. "You wouldn't want to give a panda to someone you don't trust."

When it comes to diplomacy, there are glaring differences in how China and the U.S. currently conduct affairs.

In short, the two sides are like oil and water—they don’t mix well.

So, expect China to punt a lasting trade resolution. They would prefer to deal with Mr. Trump’s successor, whenever that opportunity arises.

Meanwhile, expect President Trump to use China to rile up his base through the election. And expect him to blame Jay Powell if he loses.