The GameStop And AMC Moonshots May Be Stickier Than Originally Thought

The GameStop And AMC Moonshots May Be Stickier Than Originally Thought 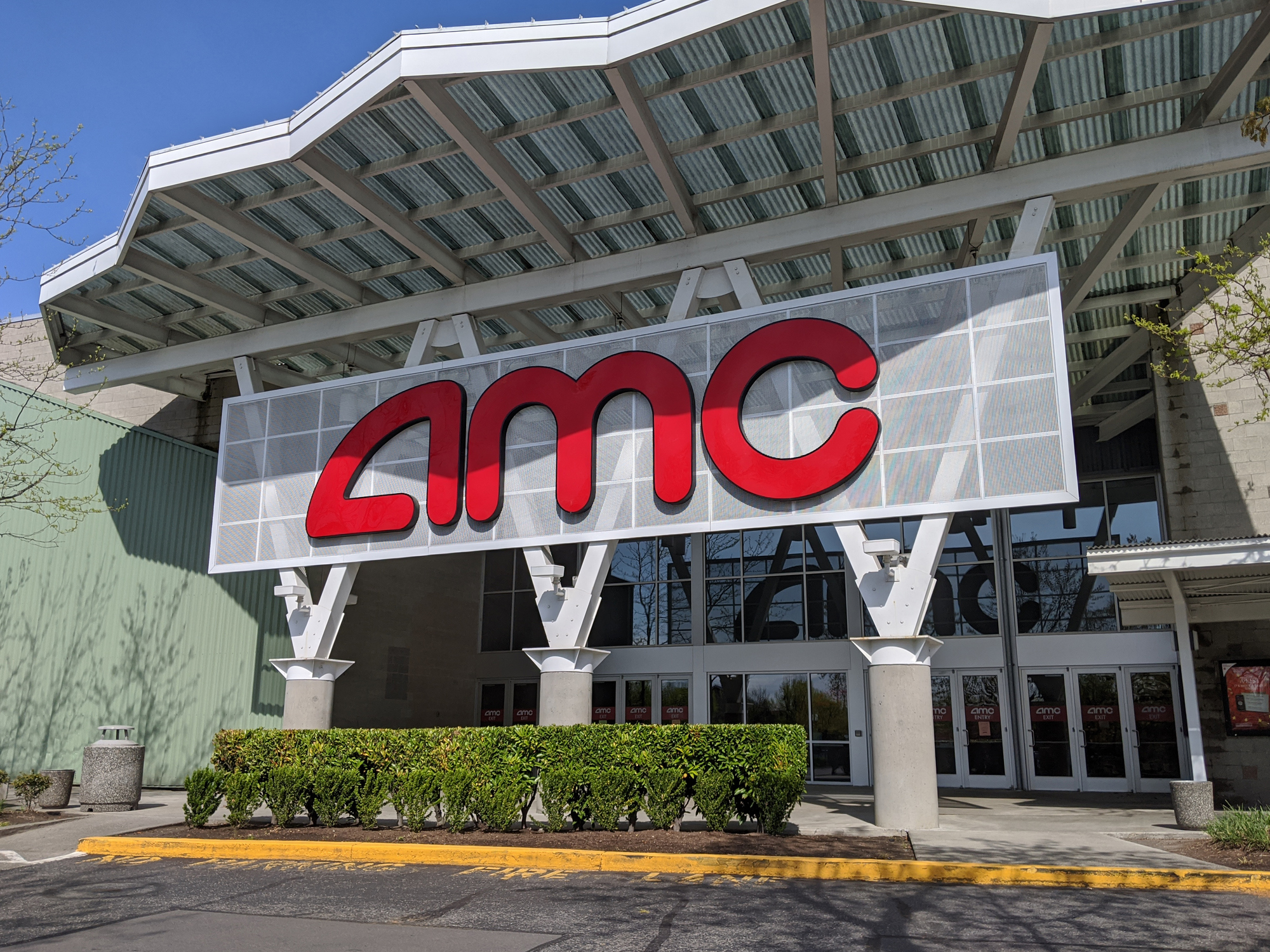 If it were a horror movie, they might call it: “Return of the Killer Meme Stocks.”

Reddit favorites GameStop and AMC Entertainment are soaring again. In May, GameStop rallied 28%, while AMC jumped 160%.

Similar to earlier this year, big returns in meme stocks have brought scary P&L pain to the hedge fund community.

Didn’t they learn their lesson in January?

Shares of AMC Entertainment surged 116% last week. Year-to-date, the movie theater chain’s shares have rallied over 1,100%, giving a company that was near bankruptcy a year ago a market capitalization exceeding $12.8 billion.

The amazing turnaround isn’t due to surging popcorn sales or a strong box office.

Retail investors are purchasing shares and posting about it online. Last week, hashtags like #AMCSTRONG and #AMCSqueeze trended on Twitter, helping drive $209 million of net inflows into AMC shares between Monday and Thursday (source: Vanda Research).

For AMC, 94.5 million shares were sold short as of May 14th, exceeding the previous high in April. That seemed to catch the attention of the Reddit crowd, who apparently sensed another opportunity for a short squeeze.

Not much else would easily explain such a dramatic rally in AMC shares. The fundamental story is abysmal, with revenues and earnings both trending the wrong direction.

The top four holders of AMC shares currently are: Vanguard (7.6%), BlackRock (5.5%), Invesco (1.4%) and State Street (1.3%). All four are major sponsors of passive ETFs, which usually buy securities based on past price appreciation.

Thus, even if AMC’s corporate fundamentals have never justified the moonshot price action in shares, a firm like Vanguard will buy anyway. To passive investors, price is always truth, because the market is supposedly “efficient.”

For example, at the end of Q2 last year, Vanguard owned 4.7 million shares of AMC. Then, aft

At the end of 2020, AMC’s market capitalization was $475 million—far less than the current value of Vanguard’s holdings alone.

Most Vanguard investors probably don’t worry about what’s under the hood of their funds. After all, most are choosing to passively invest in “the market.”

That said, both the market and passive funds that mimic it are still comprised of individual stocks, like AMC. Is anyone alarmed to know Vanguard just bought a truckload of AMC shares—at a valuation that has literally blasted off to the moon—even though the company’s fundamentals are clearly deteriorating? 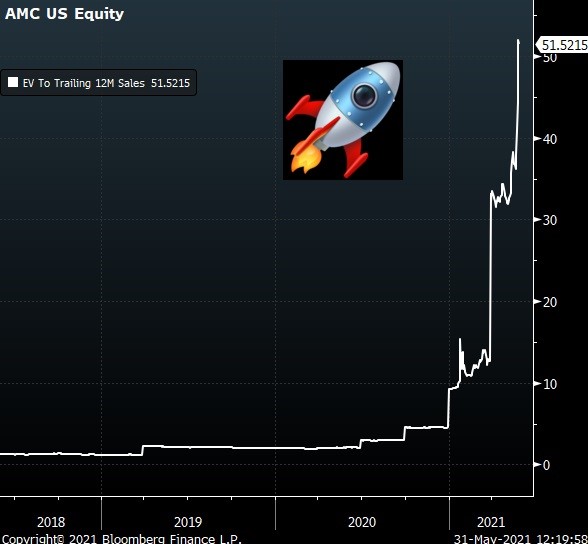 A year ago, when Vanguard owned less than 5 million AMC shares, the stock traded at a price-to-sales multiple slightly over 2. Today, the enterprise value to sales multiple is over 51. At this far richer valuation, Vanguard has increased its AMC stake by over 700%, totally ignoring the nosebleed valuation.

If one of the main objectives of a corporation is to grow its sales and earnings, I get why a hedge fund would be tempted to short GameStop. Like AMC, GameStop does not boast a pretty fundamental picture. Sales and earnings have been trending the wrong direction since 2017.

However, trailing fundamentals have almost nothing to do with what’s driving the demand surge in GameStop shares. The crowd is buying the stock because they want to rally behind a story and squeeze some supposedly greedy hedge fund managers.

Hedge funds must adjust to this new reality. “Short sellers may start trimming their positions in the face of continued stock price strength,” said Ihor Dusaniwsky, S3 Partners’ managing director of predictive analytics. They had seen mark-to-market losses of about $475 million for the month of May alone prior to the latest spike, according to S3 Partners data.

GameStop probably has more rocket ship emojis on message boards than any other stock currently. For me at least, that makes it a ludicrous short idea.

Whether fundamental investors like it or not (I’m one of those, BTW), rocket ship emojis are probably a more important metric today than P/E ratios. That won’t always be the case, but it is for now.

Many perceived GameStop’s moonshot rally earlier this year to be a flash in the pan. It all started when Chewy founder, Ryan Cohen, made a quiet investment in the company in September 2020. That was a gutsy, contrarian investment, by someone who was a logical “white knight” to help turn around the struggling video game retailer.

Cohen bought into GameStop at an average cost basis of $9.12, according to Bloomberg data. Today, the shares trade at $222 a share. His enormous return in less than a year deserves more than a golf clap.

Vanguard, on the other hand, was a net seller of GameStop the same quarter Cohen bought into the company.

On Mr. Cohen’s first reported holding date (9/21/2020), GameStop shares traded at a price-to-sales ratio of 0.24. Vanguard was selling the stock near that valuation.

In Q1 2021, when Vanguard was buying aggressively, GameStop’s price-to-sales ratio was north of 3.0. 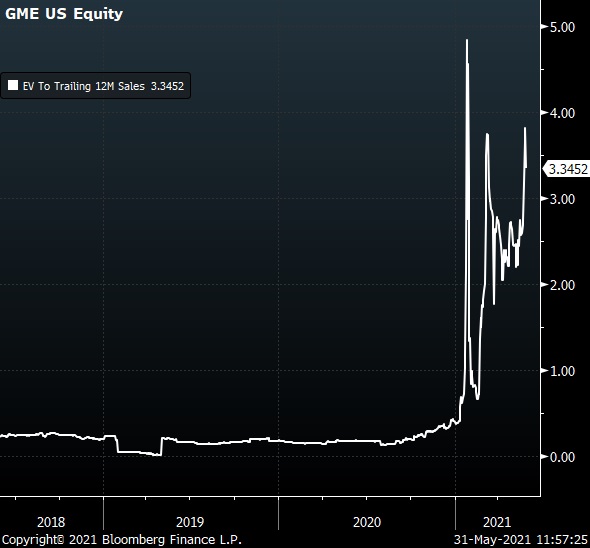 Here’s how it works. Individual investors pick a company they want to support, tell their friends and a bunch of strangers about it, and if it catches on and really takes off, passive giants like Vanguard come in and add to the party, buying purely because the stocks are going up.

Not only does this dynamic add to the upward buying pressure during the accumulation period; it also helps sustain an elevated valuation after the Reddit Army moves on. “Passive subsidies” are ongoing thanks to inflated market capitalizations.

For example, both GameStop and AMC are now top ten weights in the iShares Russell 2000 ETF (ticker: IWM). So, every time a financial advisor wants to make an allocation for a client to “Small Cap US equities,” using IWM as the passive vehicle for that exposure, they are allocating 0.50% and 0.35% of those funds to GameStop and AMC, respectively.

Also, even though GameStop’s valuation has gone up considerably versus a year ago, it’s still a top holding in a number of small-cap “value” ETFs, such as the SPDR S&P 600 Small Cap Value ETF (1.1%; #1 holding) and iShares S&P SmallCap Value ETF (1.3%; #2 holding).

To optimally invest in 2021, someone needs to invent a way to measure “Zeitgeist” as a factor.

I know it seems like fun and games for now. But what are the long-term implications for capital markets if this type of activity continues?

A few meme stocks here and there is one thing. But a “meme economy” would be an entirely different matter.