As the first-half of 2019 draws to a close, investors have much to cheer about. A lot of money has been made across many asset classes.

If you're considering tweaking your strategy for the second-half of the year, I have four words for you: Buy gold, sell bonds.

Why Gold Is Attractive Again

Gold has been dead money since 2011. But lately, it's showing signs of life again. Gold recently broke above an important resistance level at $1,350. Some technicians think this sets the stage for a run to $1,700.

There are several important reasons why money is flowing into gold.

1. Safe haven store of value. It's no coincidence that gold and bitcoin are both taking off this year. Both also spiked in 2016, which is the last time European bond yields drifted into negative territory. As long as the world's central bankers stay committed to QE, currency wars, and other endeavors that involve unlimited money printing, then alternative currencies like gold and bitcoin will likely maintain a strong bid.

Gold is particularly appealing because:

2. Dollar hedge. Many commodities like gold are priced in dollars. So when the dollar weakens, commodity prices tend to rise.

The U.S. dollar has outperformed global currencies in recent years. Based on recent remarks and tweets, President Trump clearly wants that trend to end.

Presidents tend to get the dollar they desire via their influence over the Treasury Department and Fed. This President wants a weak currency to help mitigate economic fallout from the trade war. Gold will likely do well if the Trump Administration succeeds in pushing the dollar lower.

3. Central bank buying. The dollar is the world's primary reserve currency, but a number of countries might like to see that change.

Russia, for example, cut the dollar from 46% of its international reserve in 2017 to 23% in 2018. To make up the difference, Russia increased the share of euros, renminbi and gold.

The World Gold Council has noted an increase in net gold purchases by other central banks as well. In the first quarter of 2019, central banks bought a record amount of gold (715 metric tons). China is following suit, increasing its gold reserves for a sixth straight month in May.

Geopolitical and trade frictions aside, there is a rationale for why foreigners may want to pare back on U.S. debt. That's because the fiscal deficit is projected to explode higher in the coming years. 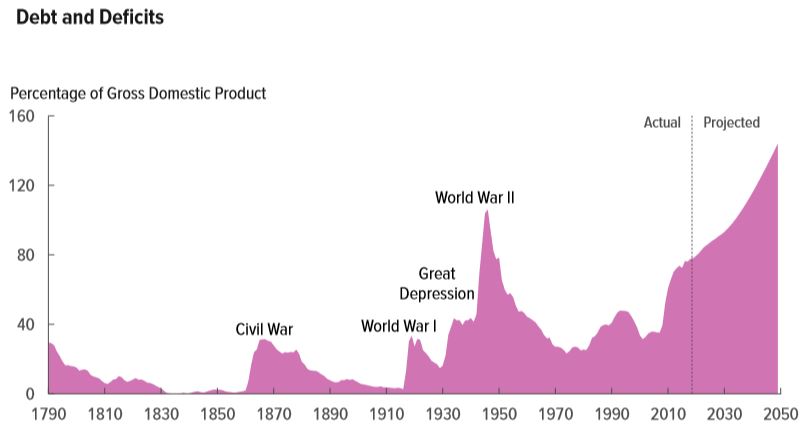 A perfect way to fund a gold investment might be selling down your bond exposure.

Many perceive bonds to be a "safe" investment, suitable for conservative investors. But is that true at any price?

At this point, the prospects for earning positive real returns in many fixed income securities over a long-term horizon appear dim.

1. Negative Yields. If the Fed and ECB want lower long-term rates, they're getting their wish. The U.S. 10-year yield has descended to 2.0%, while Germany's 10-year trades at a record low yield of -0.3%. Per Bloomberg, approximately 25% of global bonds presently trade at negative yields.

What could possibly be safe about investments guaranteed to lose money?

Another striking example relates to the Republic of Austria. Two years ago, Austria issued a 100-year bond at a 2.1% coupon rate. To buy those 2117 Austria bonds today would require paying 60% over the issue price, which means settling for a yield of just 1.1%.

100-years worth of interest rate risk, in exchange for a 1.1% yield. Think about that for a moment.

People often talk of "euphoric sentiment" being a sign of equity cycle tops. Might we be seeing that now in bonds?

2. Bonds Have Bear Markets, Too. Speaking of 100 years, if you survey the last century, bond returns weren't exactly sterling.

Below is a table showing a sample of average real returns from 1900 - 2000. All the countries shown exhibited positive real returns in their equity markets, but not their fixed income markets. Even in the U.S., real returns were only 1.6% per year.

Sources: Investopedia, "Triumph of the Optimists" by Dimson, Marsh and Staunton.

It's one thing to say bonds aren't a great long-term investment. But what if you also layer on today's yield environment?

I'd like to take you back to the year 1951. The 10-year treasury yielded about 2.0%—similar to now. The Fed had pegged interest rates at an artificially low level to help finance government debt during World War II. After those restrictions were lifted, the U.S. bond market commenced a secular bear market that saw the 10-year yield rise to 15% by 1981.

30 years of negative real returns is hard for many of today's bond investors to fathom. But it could happen. It's happened before.

Thousands of investors currently have their retirement nest egg parked in Retirement Target Date Funds, which allocate more to bonds as folks age. The allocation doesn't factor in valuations. And that doesn't pass the common sense test.

Bonds were clearly much riskier in 1951 compared to in 1981, because the yield profiles were totally different. Following similar logic, bonds are riskier today than they were in 1981.

So if you own bonds, consider taking some profit. Be thankful for the excellent total return you likely achieved.

Might I be early in making a call to fade bonds? Sure. But now is a good time to take a shot at rotation.

Numerous technical indicators suggest bond yields may bottom soon. As just one example, below is a weekly chart of the 10-year yield, overlaying an indicator called TD Sequential. The red 13 appearing this week suggests the bearish trend in yields may be nearing an exhaustion point, setting the stage for a reversal. 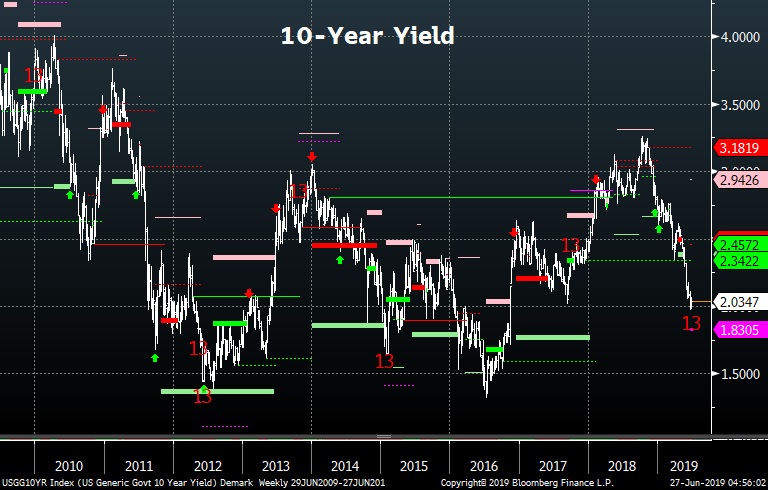 A key point to remember is: bull markets are the authors of bear markets.

In a bull market, valuations become stretched, which lays the seeds for an eventual bear market. You can apply that simple nugget of wisdom to stocks, bonds, or any other asset in which valuation plays a role.

So take your pick. What's really a safe haven investment at this stage?