The S&P 500 Index fell 3.2% on Tuesday, while shares of McCormick & Co. (MKC) rose slightly. Why did most stocks go down while this one went up? It’s called a rotation.

McCormick makes the red spice containers almost everyone has in their cabinet.

Suddenly, consumer staples, utilities, REITs and health care stocks are popular places to park money. A lot of names in these sectors reside near 52-week highs, while the broad market has sold off sharply.

Investors are rotating to names with high earnings certainty because the broader outlook for earnings is starting to look a lot more uncertain.

Below is a ten-year chart of the S&P 500 plotted alongside analysts’ bottom-up estimates for the next four quarters. Analysts see earnings climbing 12% in 2019. Consensus price targets imply the S&P 500’s price-to-earnings (P/E) multiple will nudge higher to 18.2x. As a result, the benchmark is projected to climb to 3,159 in the next 12 months, gaining about 17%. 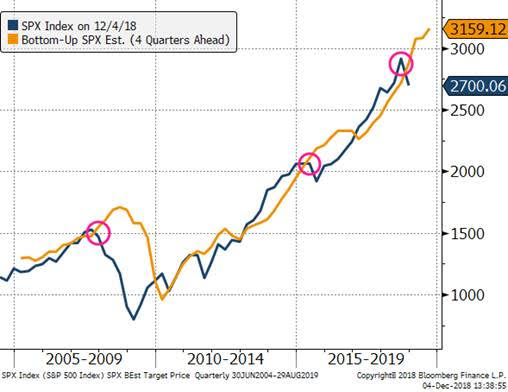 “S&P 500 companies' 3Q results have been extraordinary, with the index tracking more than 27% year-over-year growth, but nonetheless... below-expected revenue growth and downward estimate revisions have thrown cold water on results that have far surpassed expectations. Company guidance also remains more negative than in prior quarters, as earnings forecasts are weak and sales expectations decline.”

In other words, growth has been great, but momentum is waning.

In the above chart, I highlight several divergences (magenta circles). Specifically, in 2007/2008 and 2014/2015, analyst estimates kept rising while the market made a U-turn the opposite direction. The former was a severe bear market, while the latter became a market correction.

Currently, another divergence is taking shape. What is the market seeing in 2019 that analysts aren’t?

1. The economy may slow more than people expect. Growth accelerated for a record nine consecutive quarters in the U.S. Consensus expects GDP growth to moderate to 2.6% this quarter. The best macro firm I follow sees growth decelerating more dramatically to 1.2%. That wouldn’t be a recession. But if they’re right—as they often are, it’s a game-changer for portfolio managers.

2. Earnings estimates may be overly rosy. The S&P 500’s trailing net profit margin climbed to a record 10.1% in Q3 2018 (source: Bloomberg). Analysts expect the good times to continue, with net margins rising to nearly 12 percent in 2020. That may be a reach. Profit margins tend to mean revert. Another element to consider: Goldman Sachs recently highlighted that just 10 stocks are responsible for half of the margin expansion in the S&P 500 since 2009. If a few mega-cap techs were to stumble (i.e. Apple, Google, Facebook), the new profit paradigm could stall.

3. The cycle peak may be closer than many realize. David Rosenberg of Gluskin Sheff monitors 15 variables that have historically correlated well to business cycles. Currently, 14 of the 15 are flashing red. We’re definitely late-cycle. Thing about that is: no one rings a bell at a market top. It may occur next year, in 2020, or it may have already happened earlier this year. Some classic signs were there—i.e. bitcoin’s dramatic blow-off top, Amazon and Apple eclipsing a trillion dollars in market cap, retail investors piling in, and important technical indicators flashing long-term trend exhaustion. Also, key leadership has fallen on hard times (i.e. FAANGs). As in war, “market generals” are typically the last to fall.

Adding all this up, it appears the main risk the market is grappling with is the earnings outlook.

A lot of firms face margin pressures heading into next year. Wage inflation, stingier credit markets, and tariffs will all weigh on firms to varying degrees.

Will topline sales be strong enough to overcome such pressures? Only time will tell. Meanwhile, this uncertainty is likely what the market is digesting lately. That explains the defensive rotation, and why “Buying the dip” isn’t being rewarded like it normally has in recent years.

Growth expectations are always a critical ingredient for assigning “fair value” to a market. Bulls can argue the S&P 500 is a bargain trading at 15.5x next year’s earnings. That seems reasonable based on interest rates, and it’s near the valuation stocks bottomed at in the 2015 correction.

Yet for any P/E argument to hold, you first must believe the “E.”  P/E multiples are worthless if the denominator is wrong.

MKC didn’t just start outperforming during that manic market slide on Tuesday. The stock is having a great year, up 51% including dividends. That beats Amazon and Netflix!

Unlike those two firms, McCormick is not an explosive growth company, transforming society with their innovations. They make spices. 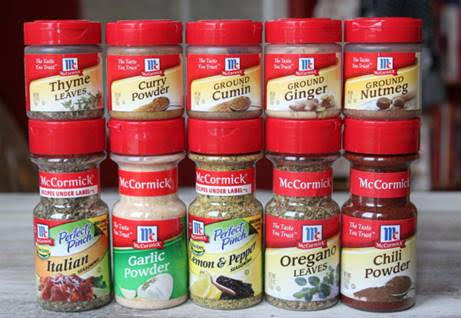 There’s a time in every cycle where boring becomes beautiful. Usually, it’s when the earnings outlook becomes shaky.

Predictability trades at a premium when it is scarce in the surrounding environment. This explains why MKC’s forward P/E multiple has risen since the start of the year from 21x to 28x, while the S&P 500’s P/E shrunk from 20x to 15.5x.

To be clear, timing always matters. I wouldn’t necessarily recommend chasing MKC at its present level. It’s just a perfect case study for what the market is starting to reward—steady profitability.