What's The Magic Of Disney Worth? A Lot More Than The Current Stock Price

What's The Magic Of Disney Worth? A Lot More Than The Current Stock Price 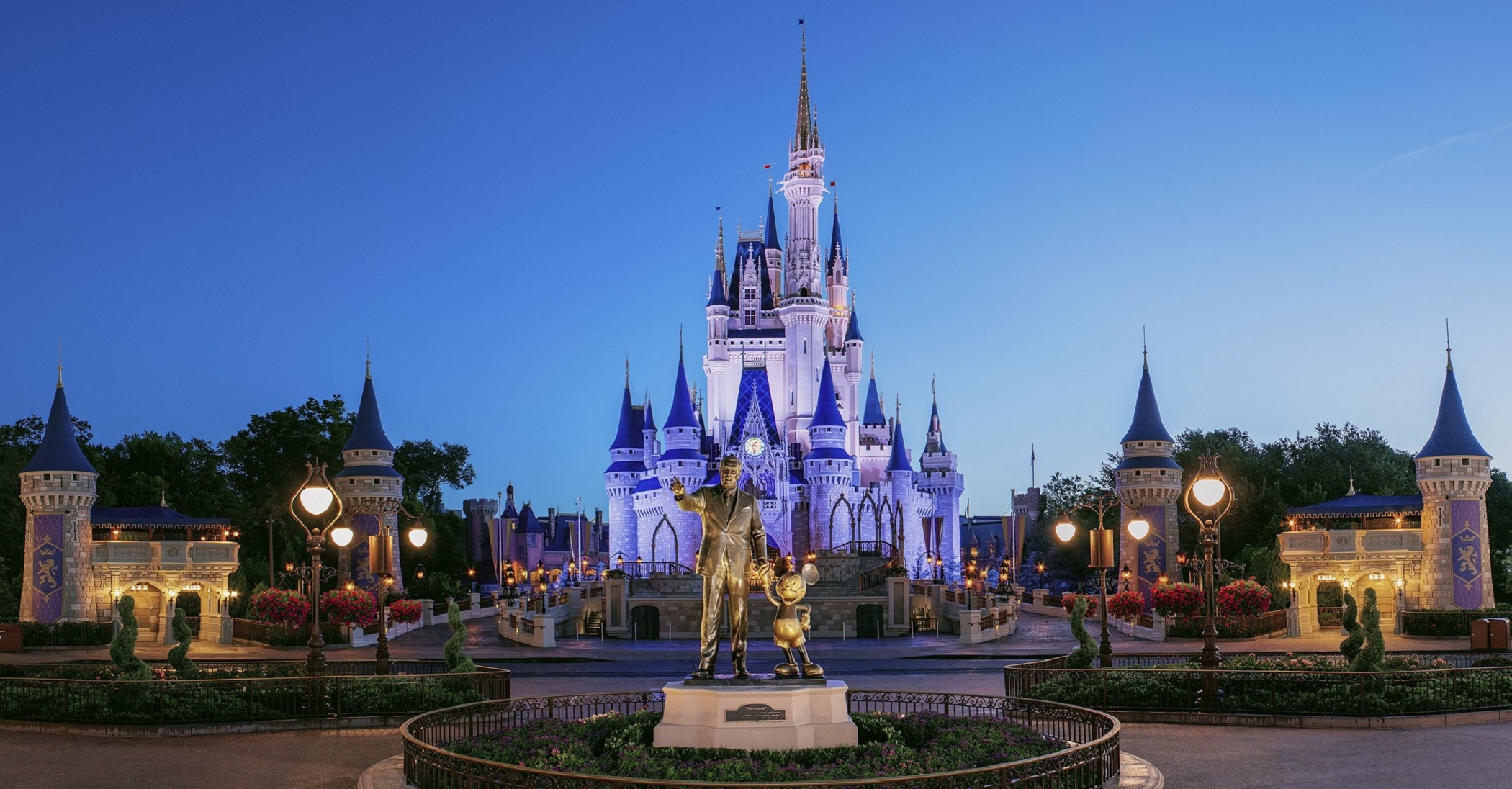 Disney is one the top performing Dobermans of the Dow so far in 2019. Shares have risen close to 30%.

My Doberman screen looks for quality cash flow generators trading at bargain prices. Disney checked both boxes at the start of the year, and the stock remains undervalued.

Disney+ launches in November at a price tag of $6.99/month. Many perceive it a bargain rate for consumers, considering it's 30% cheaper than Netflix. Disney targets 60 to 90 million subscribers for the platform by 2024.

Shares got another boost this week when "Avengers: Endgame" grossed over $300 million in its first two days at the box office. The excellent start puts this latest creation from Disney's Marvel franchise on pace for a record-setting debut.

Investors may be pondering: what's the endgame for Disney's stock?

Of course, it all depends on how you look at it.

An investor not already in Disney may be apprehensive about chasing it after the recent breakout. 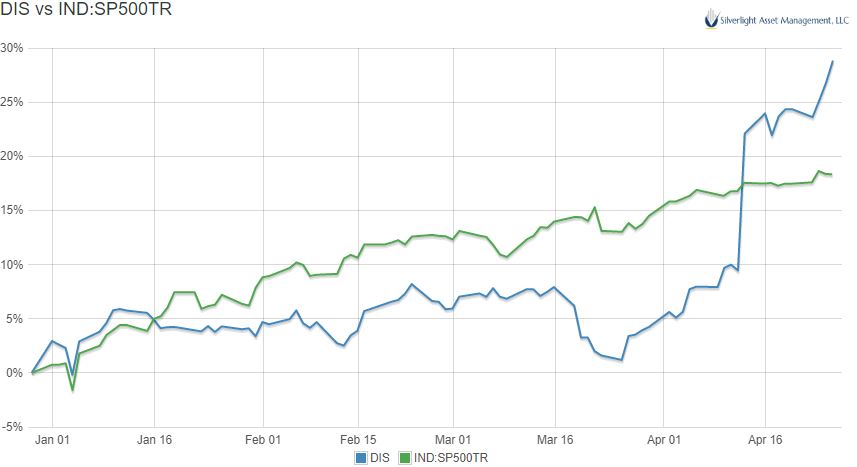 Looking at a two-year chart, concerns about the stock being ahead of itself may dissipate. The recent jump merely shrinks Disney's gap versus the S&P 500. 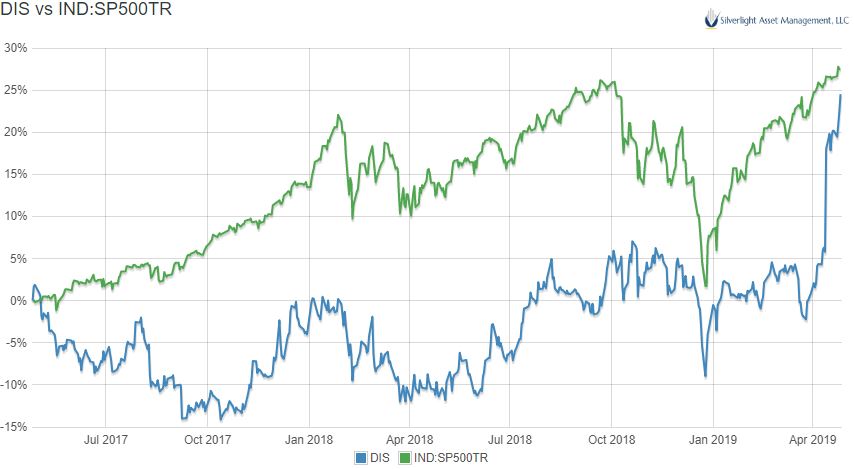 An investor could also look at a very long-term chart and draw another conclusion. That is: Disney is an outperforming juggernaut. 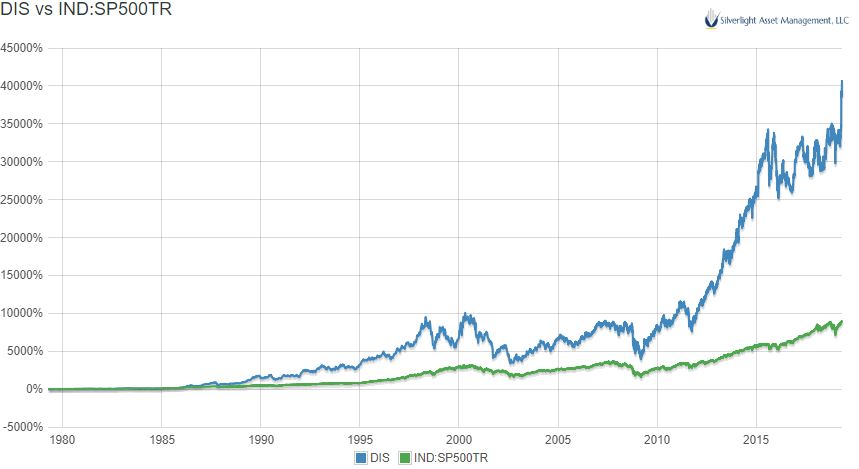 Maybe the current breakout is just another chapter in the same evolving story?

A wide moat means virtually any child born in the United States today is immediately a future customer of the Walt Disney Corporation. Someone is going to take that kid to visit a Disney theme park. They'll watch Disney movies and shows. They'll want Disney licensed toys.

77 million baby boomers grew up adoring the Disney brand. Now many of them eagerly await grandchildren they can spoil.

No company I can think of enjoys such powerful cross-generational loyalty to its brand.

Sure, Disney has evolved over the years. Yet the company has maintained a magical connection to its customers.

The fact Disney is still able to monetize a drawing of a mouse 90 years ago is extraordinary. Mickey is the definition of a long-term asset. They keep selling that mouse over and over again, decade after decade, generation after generation. No wonder Disney's long-term profitability is amazing!

The most vexing challenge any business faces is creating a value proposition that endures. If something works, competitors always spring up to quickly copy it.

So the trick is to create something so unique or compelling it can't be duplicated. Disney passes this test so many other businesses fail at.

You can use a variety of profit metrics to measure a company's moat. Trends are important.

Disney has earned a progressively higher return on assets throughout this decade. The improving fundamental picture does not show up in the stock's valuation, however. Disney trades at nearly the same price-to-earnings (P/E) multiple as back in 2011. 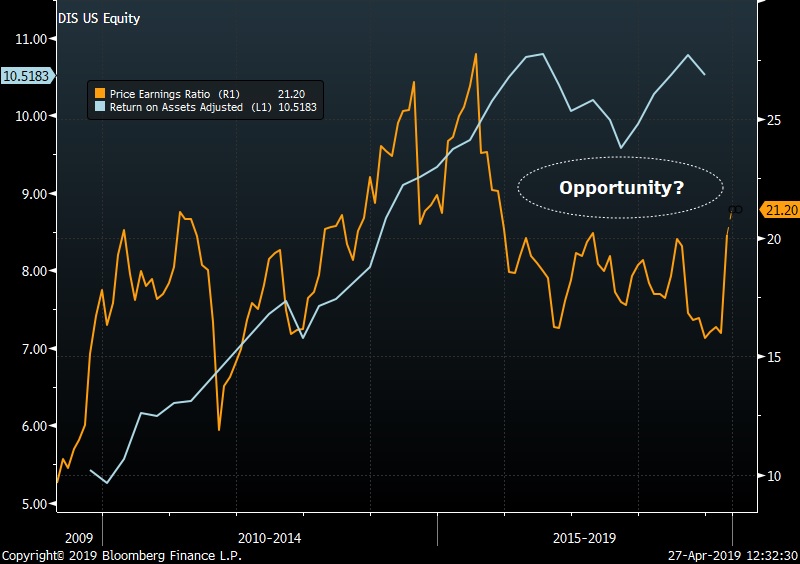 Disney doesn't just look like a bargain compared to itself, but also compared to the broader market.

The amount of net income, excluding one-time charges, that Disney earns in relation to its asset base is 10.5%—exceeding the 8.1% average of the S&P 500.

Despite having impeccable brands, above-average profitability and a low-risk balance sheet, Disney trades at roughly a market P/E.

All the players involved in the content streaming revolution face execution risk. It would be naive to think otherwise. But if you subscribe to the "Content is King" theory, it would be just as naive to bet against Disney at this point in the race.

The list of content slated for Disney+ is a reminder of the awesome breadth of content Disney now owns across multiple platforms. After a series of acquisitions, that lineup includes: ABC, A&E, FX, ESPN, National Geographic, History Channel, Fox, Pixar, Marvel, and Lucasfilm.

Disney is not just a distributor. It will own most of the value chain that runs from production studios to your living room.

Movie theaters are worried, because they are vulnerable middlemen in the new paradigm.

Any distribution business is destined to be a low margin business. Content distributors are like middleman retailers, where price compression and competition are ever-present. There's no sustainable economic moat. Such businesses are always sandwiched between product creators and customers, and it's a tough balancing act.

Consider how many once dominant retailers have seen their edges fade and their businesses go dormant (i.e. Sears, Toys R' Us, etc.).

Netflix created a new distribution platform that upends the traditional cable TV value chain. In the early going, it was disruptive. Now copycats are coming out of the woodwork (i.e. Amazon, Disney, etc.).

Netflix changed how people watch television, but it didn't change what we watch.

Reid Hastings and company knew competition would come, and they were smart to hedge the risk by launching original programming.

Netflix is spending billions on developing new content and has quality shows. What it doesn't have, though, is a magic mouse.

No matter how many billions you spend in a given year, there's no guarantee you'll create instant classics overnight. Especially in an environment with ever-rising competition for viewers' attention, with others like Amazon and YouTube also creating an influx of new content.

How much TV can people realistically watch in a day?

Disney has an edge because it owns proven content. And a lot of their upcoming content is virtually guaranteed to be a hit. Does anyone doubt Frozen 2 or Toy Story 4 will do well?

Over the last ten years, the price of money has descended to a historical low. That has propelled multiples investors are willing to pay for growth stocks, such as Netflix. And low interest rates enabled Netflix to borrow a lot to build its content arsenal.

Someday in the future, however, the cost of capital will rise. We don't know when, but we know it will happen. And when that happens, the balance of power in the stock market will dramatically shift, favoring firms that can self-fund operations via internally generated cash flow. Firms like Disney.

Disclosure: I own Disney in accounts I professionally manage. This material is not intended to be relied upon as a forecast, research or investment advice. The opinions expressed are as of the date indicated and may change as subsequent conditions vary. The information and opinions contained in this post are derived from proprietary and nonproprietary sources deemed by Silverlight Asset Management LLC to be reliable, are not necessarily all-inclusive and are not guaranteed as to accuracy. As such, no warranty of accuracy or reliability is given and no responsibility arising in any other way for errors and omissions (including responsibility to any person by reason of negligence) is accepted by Silverlight Asset Management LLC, its officers, employees or agents. This post may contain “forward-looking” information that is not purely historical in nature. Such information may include, among other things, projections and forecasts. There is no guarantee that any of these views will come to pass. Reliance upon information in this post is at the sole discretion of the reader.​​