Greed Isn't Good, But Profits Are

Greed Isn't Good, But Profits Are

Submitted by Silverlight Asset Management, LLC on May 22nd, 2019 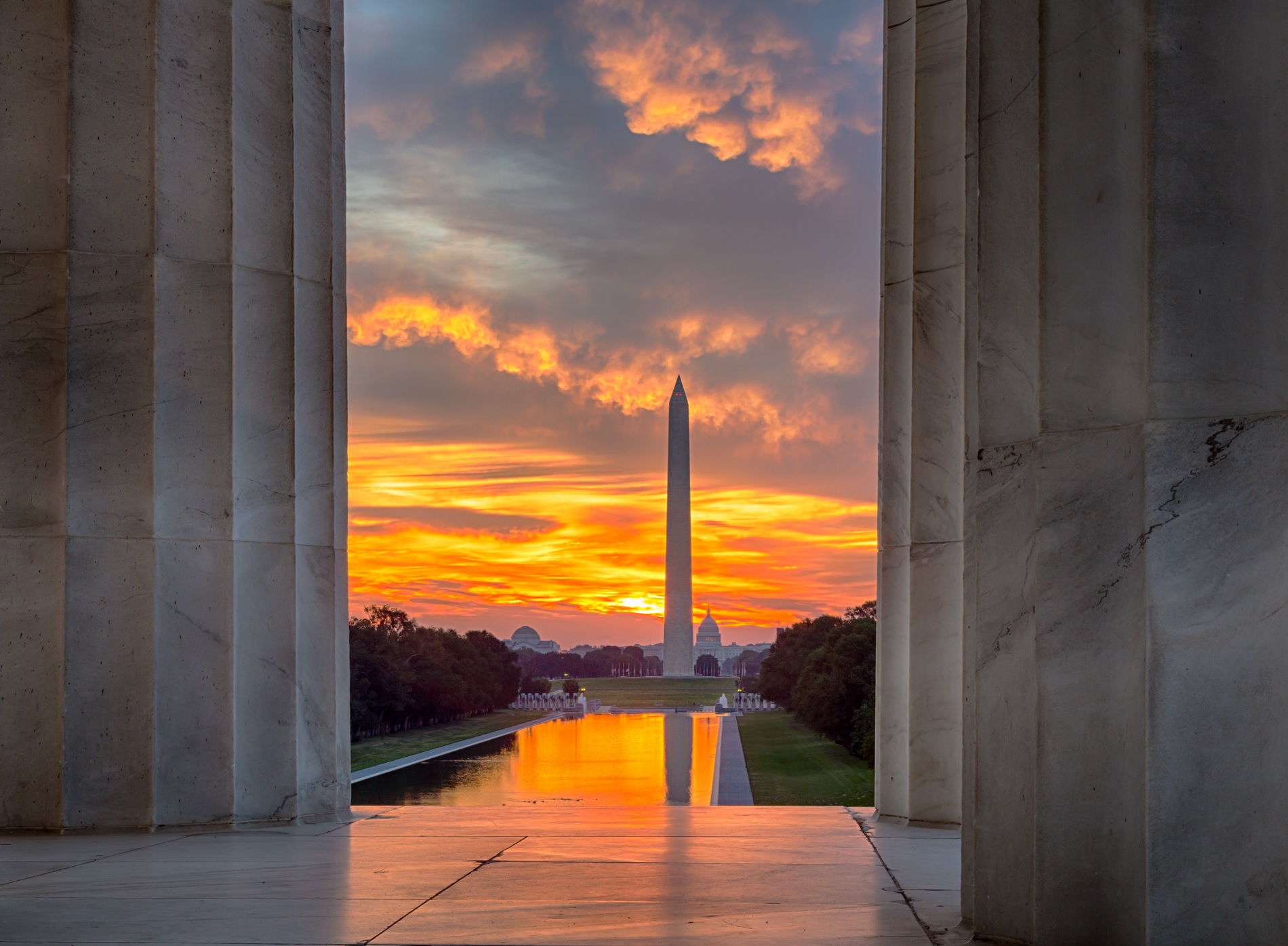 I’ve worked with hundreds of investors in my career. To date, no one has ever told me their goal was to lose money.

Yet apparently that’s becoming more of a ‘thing’ lately.

Only when you consider the broader environment—where negative earnings and interest rates are becoming the new normal and Modern Monetary Theory is circulating through the halls of Congress—does it become clear why such a pitch may find a receptive audience.

We live in a time when profits don’t seem to matter much.

In 2019, we will probably see the biggest year for initial public offerings (IPOs) since 1999. Dollar volume will likely set a record, due to the rich valuations being assigned.

The general attitude seems to be: No profits? No problem!

Many of the biggest IPOs this year—including Uber, Lyft, and WeWork—are money-losing firms. The last time this many unprofitable firms went public was in 2000.

“The rise in unprofitable IPOs reflects the general preference in both public and private markets for growth over profitability,” says PitchBook analyst, Paul Condra.

Mr. Condra is correct. A similar theme is playing out in the broader stock market. According to Gotham Asset Management, the average first-quarter return of Russell 1000 firms with negative cash flow was +31%—more than double the overall index return of +14%.

Lyft, which is down 23% since going public in March, argues it could have been profitable if it didn’t spend as much on R&D or advertising. But then again—they probably wouldn’t attract as many customers without such spending, right?

In Europe, interest rates are once again traversing the zero boundary, weighing on global rates. The last time this occurred was in early-2016. That time around, global equities staged a powerful rally. A similar experience may now be underway. 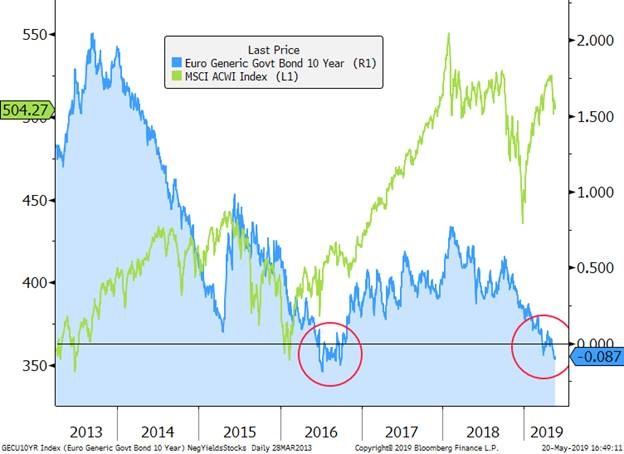 Falling interest rates tend to spark higher valuations, and the S&P 500’s forward P/E multiple has risen to 17.7x from 14.6x at the start of the year.

But then again—maybe everything is a bid when money is free?

Below is the exact same interest rate graph overlaid against bitcoin (green line). 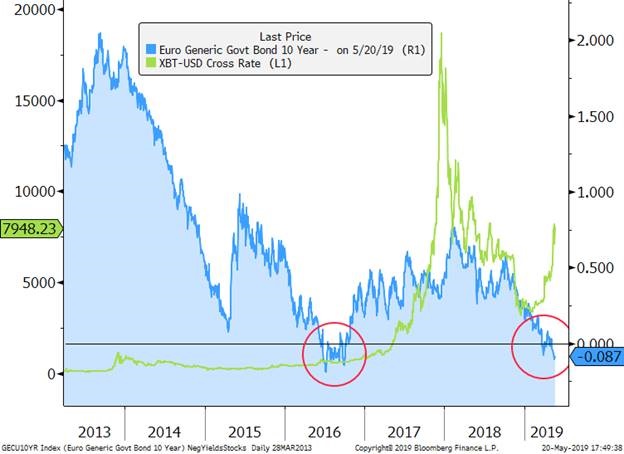 Does the return to negative rates have something to do with bitcoin’s dramatic rebound in 2019? That would make sense, given how bizarre and manipulated the bond market has become.

Last week, I ran a screen and identified over 11,300 government and corporate bonds where the holders are guaranteed losses if they hold to maturity. The amount of government debt with negative yields rose over $10 trillion in the spring.

More troubling to me, though, is the $200 billion worth of negative-yielding corporate bonds. Every corporation has credit risk. Yet that doesn’t seem to be priced-in right now.

For instance, in recent months French firms LVMH and Sanofi both issued bonds at sub-zero rates. Investors gobbled them up. According to the Financial Times, the LVMH placement saw six times as many orders as the bond’s €300 million size.

Why would professional investors buy bonds they know will lose money if held to maturity?

Most bond mandates stem from the idea bonds are “safe.” But is that true at any valuation? The 30-year treasury yield of 2.8% is equivalent to a P/E ratio of 36x. At negative rates, you can’t even calculate a P/E.

Healthcare for all? MMT can pay for it.

Universal income? MMT can pay for that, too.

With MMT, the government could theoretically deposit money into peoples' bank accounts indefinitely.

And if inflation gets out of hand, no worries. MMT proponents argue you just raise taxes.

Is the key to good jobs and shared prosperity as simple as printing more money?

Alexandria Ocasio-Cortez appears to think it’s an idea worth considering. On the other side of the aisle, Marco Rubio seems open to it as well.

It’s like economic and political nirvana all wrapped into one. Unlimited money, unlimited handouts, no consequences for bad behavior.

Yet there’s also a nagging issue that hovers in the background… What is money worth if money is free and unlimited?

The quantitative easing era may explain why we seem to have entered the “The Investment Twilight Zone.” Support for such an argument grows stronger the longer things like negative interest rates persist.

I remember my grandmother saying those words like it was yesterday. It was a simple lesson she drilled into my head growing up.

If you want to deconstruct how wealth is created, “Money makes money” could be the foundation of it all.

At the simplest level, this means if someone invests a dollar today and makes a 10% return, they will have $1.10 to reinvest. Then they can earn even higher profits. That’s how money makes money in a capitalist system.

The same principle applies to corporations. Firms raise capital via debt and equity. Then it’s up to management to deploy that money productively.

What ultimately creates business value is a profit metric called Return on Invested Capital (ROIC). You hit the jackpot if you find a business that generates high profits that can be reinvested at high incremental returns.

My Grandmother bought my first stock in 1995. A coffee company called Starbucks. Turns out she made a great pick, because she correctly identified a profit compounding anomaly.

Below is a graph showing Starbucks' historical ROIC and stock price. ROIC has trended higher (white line) as new stores opened around the world. Currently, ROIC is at an all-time high and so is Starbucks' stock price (green line). 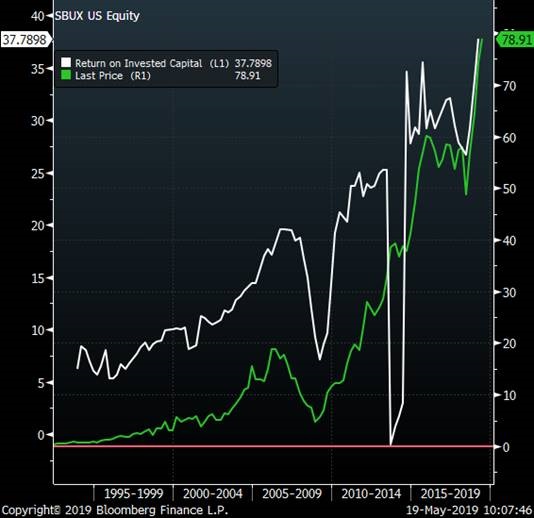 Another great thing about profits is sustainable job creation. In 1993, Starbucks had 4,585 employees. Today, the company employs over 291,000.

At a broader level, profitability also drives the overall stock market. The S&P 500 produced a 10% annual return from 1927–2017. As shown below, earnings-per-share growth and dividend reinvestment accounted for the vast majority of that return. 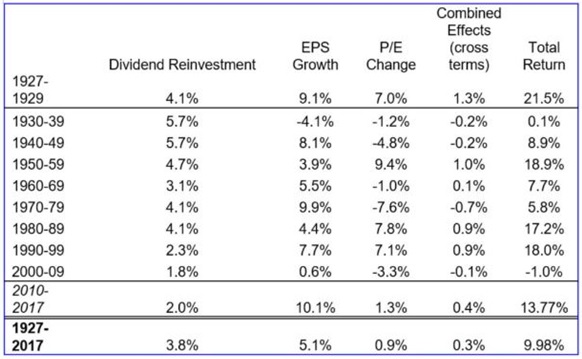 Bottom-line: If prosperity is a priority, profitability must stay a priority.

You can’t print or tax your way to prosperity. It must be earned. By countries, companies, and individuals.