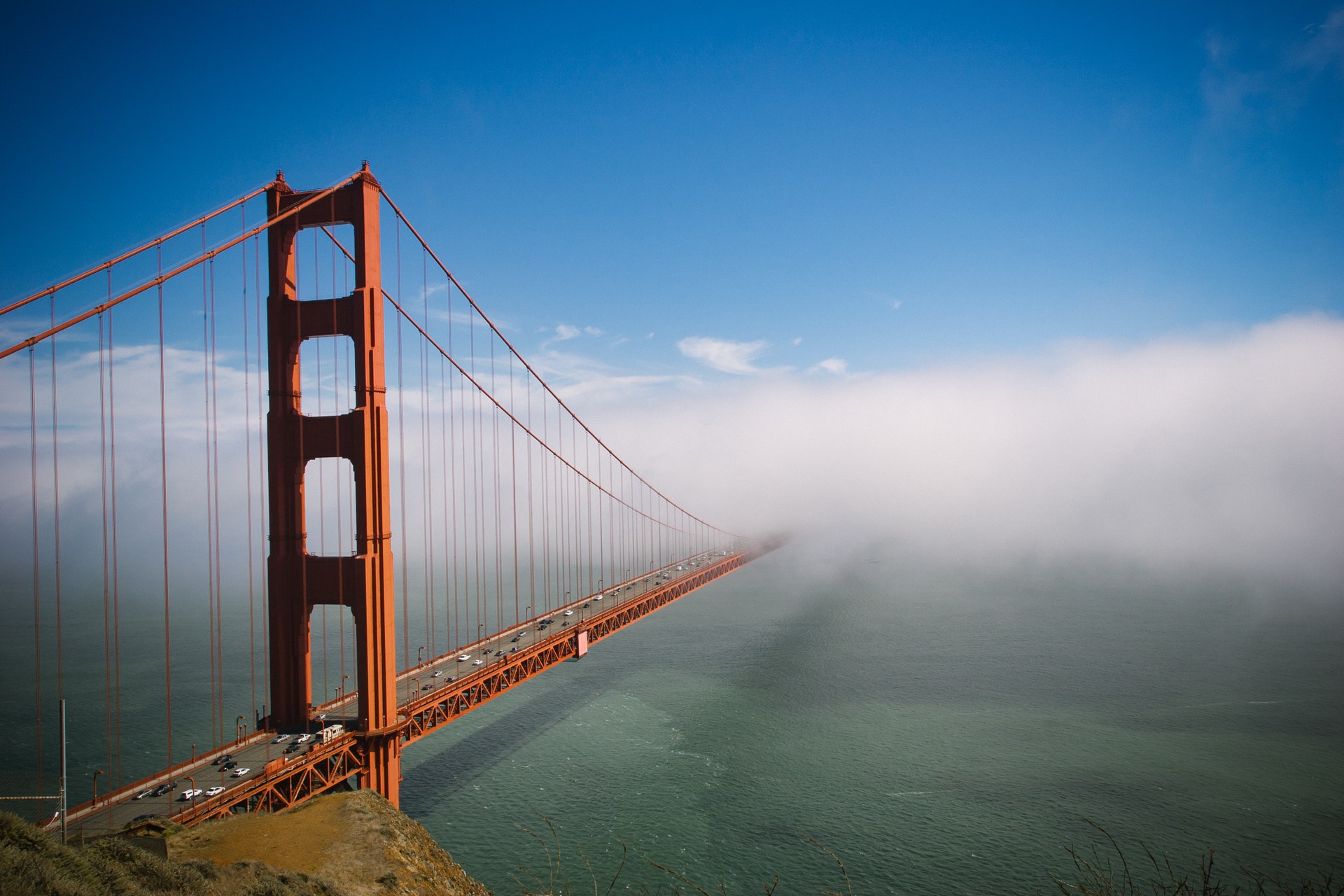 It started out like any small fire. Then it spread.

Fire in Paradise is a new Netflix documentary about the 2018 fire that eviscerated the small town of Paradise, California. The film chronicles the moment-to-moment drama of how the most devastating wildfire in over a century unfolded. You learn about brave firefighters who risked their lives to save lives, heroic teachers, and everyday people trying to persevere in the aftermath of it all.

The film prompted my wife and I to discuss our fire safety plan. As California residents, we’re not immune to the risk.

Later, the film also made me think of a market-related analogy.

The Relationship Between Risk and Liquidity

Nothing that transpires in markets compares to the tragedy fire victims face. Fire can be a useful analogy, though, because it’s a primal risk everyone understands.

If you see a fire coming, the danger is obvious. The immediate instinct is to run away, and that’s the correct action.

Investment risks are different. They can be hard to spot, even in plain sight. Also, by the time everyone notices a risk, it usually pays to run toward the fire.

Real fires and “market fires” are similar in how they can both happen fast.

The initial spark for the Camp Fire that ravaged Butte County last year was a faulty transmission line. From there, a combination of high winds, high temperatures, and parched vegetation from a drought, made a conducive environment for the fire to rapidly spread.

As the fire made its way toward the town of Paradise, residents scrambled to evacuate. The roadways could not handle so many people leaving at once, however. Traffic jams ensued. Soon, many were helplessly stuck in the middle of the fire.

Macro risks usually start out festering in the shadows, until a tipping point arrives. After the threat becomes evident to the masses, a stampede commences.

In a market dislocation, the “blocked roadway” is a liquidity shortage. There aren’t enough buyers to absorb the sudden influx of sellers, so prices plummet.

We don’t need to identify the precise spark that ignites a market fire. But we do want to stay vigilant monitoring for conditions that create a ripe atmosphere for a market event.

Currently, there’s a high-profile town in Northern California at risk.

What if a fire has already started in Silicon Valley?

This cycle’s main catalyst is a tech/consumer boom, where prolonged monetary easing has once again caused assets to soar to irrational heights.

In fact, many of today’s market darlings trade at similar valuations as the Nifty 50 stocks from the early 1970s. For those who don’t know, that was one of the classic stock market bubbles of all-time. 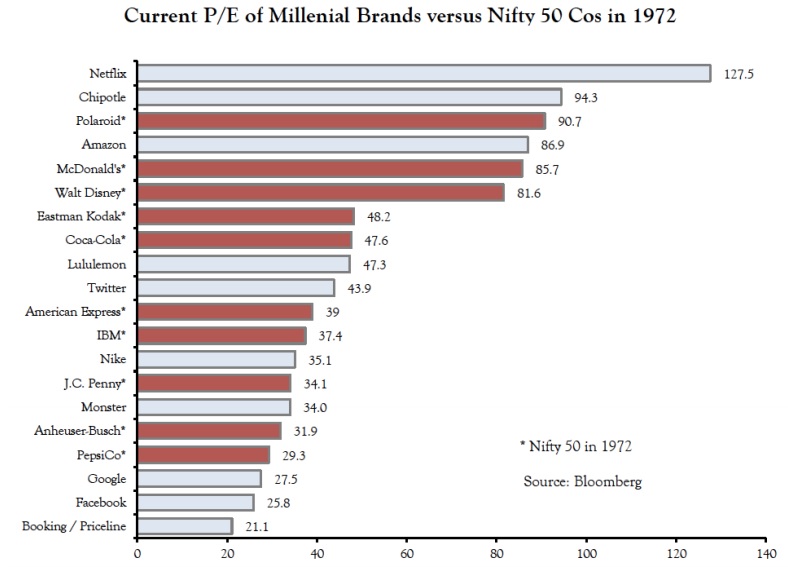 The 'Nifty 50' was a group of popular, “one-decision stocks.” Many were tied to the Baby Boom Generation coming of age as consumers.

Modern tech giants like Netflix and Amazon are also riding a demographic tailwind. Millennials fueled the ascent of these companies.

Along the way, Silicon Valley became a unique “paradise” in this market cycle. A magical place where the sun always shines, stock options go to the moon, and companies build office complexes resembling space ships. 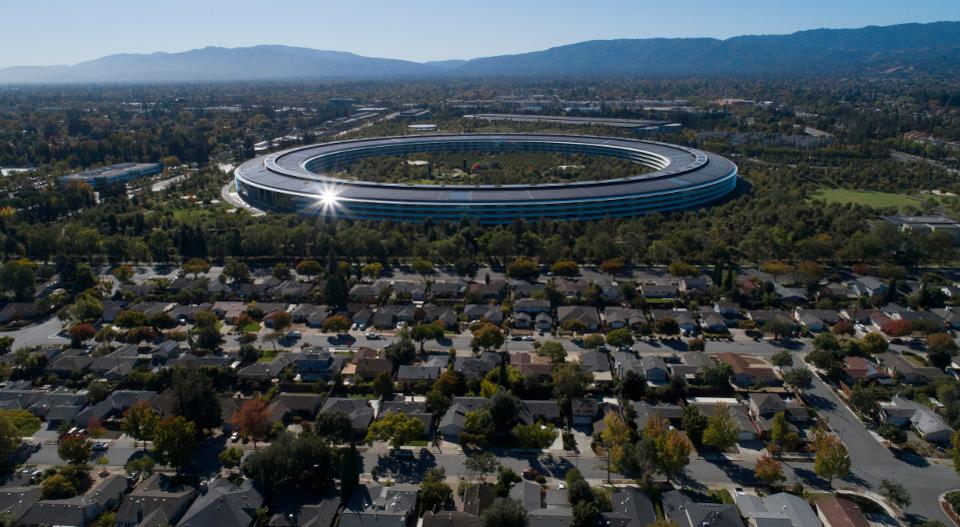 But smoke is now emanating from the valley. And there are plenty of catalysts that could help the fire spread.

Peak growth. Netflix’s subscriber count fell for the first time in Q2 2019. And that was before new competing services like Disney+ and Apple TV+ launched.

Overall sales for the FANGs are growing. But the gap in their combined growth rate compared to the rest of the market is at the lowest level this cycle.

Did you know Netflix, Amazon, Facebook and Google have all underperformed the S&P 500 since the summer of 2018?

In recent months, growth stocks have broadly lagged the market. It might be a small fire so far, but it started on the heels of growth stocks reaching their highest valuation premium since the dot-com bubble, and we know how that ended.

Private market valuations. The way Silicon Valley operates, every private market company’s valuation is based off someone else’s valuation. So, when a major unicorn like WeWork stumbles at the IPO gate, and has to mark down its valuation substantially, there’s a domino effect.

This isn’t terribly different from what transpired between 2006- 2008. After subprime mortgage defaults picked up, illiquid bundles of mortgages (i.e. CDOs) had to be marked-to-market. Once a negative feedback loop like that starts, it can be tough to reverse.

Failed IPOs. WeWork may turn out to be the “Pets.com” of this cycle, but it isn’t the only failed IPO this year.

Yet, even after a 40% haircut, Travis Kalanick still doesn’t appear bullish on the company he co-founded. The former-CEO just sold over a half a billion dollars worth of stock last week.

Lyft traded over $75 after going public in March. Now it trades around $42.

Pinterest surged after its IPO. But the stock is down 40% since August, leaving a volatility scar that may deter future investors.

IPOs are an exit ramp for VCs to monetize their early-stage investments. As that window gets tighter, it breeds more risk aversion in the Valley, contributing to a negative feedback loop.

Ever wonder how much people working at Amazon, Google, and Facebook earn? If you know where to look, you can estimate it.

Level.fyi is a website that crowdsources compensation data to help engineers contemplate offers from big tech companies. Mr. Deluard recently ran the numbers on compensation for entry-level engineers and senior engineers with around 10 years experience.

The chart below demonstrates the unsustainable nature of the current model. “You would need an infinite amount of growth to sustain these practices,” he says. 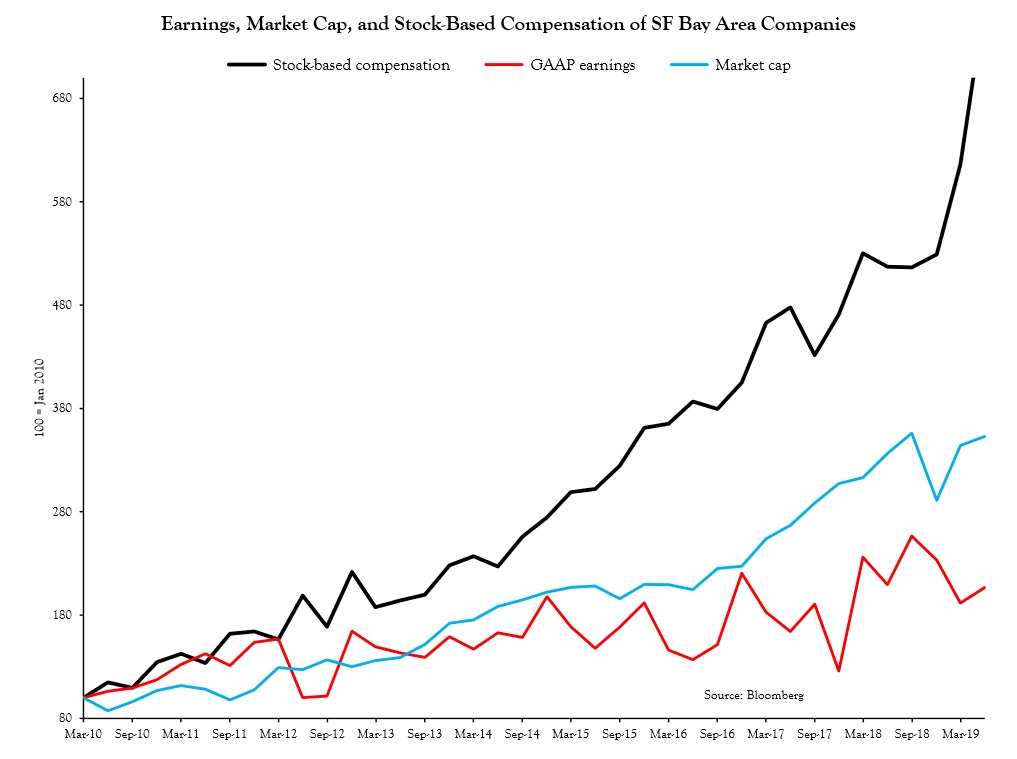 Outsourcing a huge portion of their compensation expense to the stock market frees up cash for tech firms to invest in growth projects, or cut prices to gain market share.

Problem is, this becomes a house of cards if the stocks cease going up.

Real estate. A boom in venture capital and the long equity bull market have led to rapid appreciation in Bay Area real estate. Until recently, that is.

The Case-Shiller Index of national home prices is still rising, yet San Francisco peaked in September 2018. Interestingly, that was around the same time the FANGs started underperforming.

This explains why the roads got so jammed when everyone tried to leave.

This explains what made the whole affair so treacherous.

Crowded trades are how “population density” manifests in the market. According to Bank of America Merrill Lynch’s latest global survey, being long U.S. tech and growth stocks qualified as the most crowded trade among 178 fund managers surveyed.