Consumer Staples Like P&G Are Surging. Does That Foreshadow A Recession?

Consumer Staples Like P&G Are Surging. Does That Foreshadow A Recession? 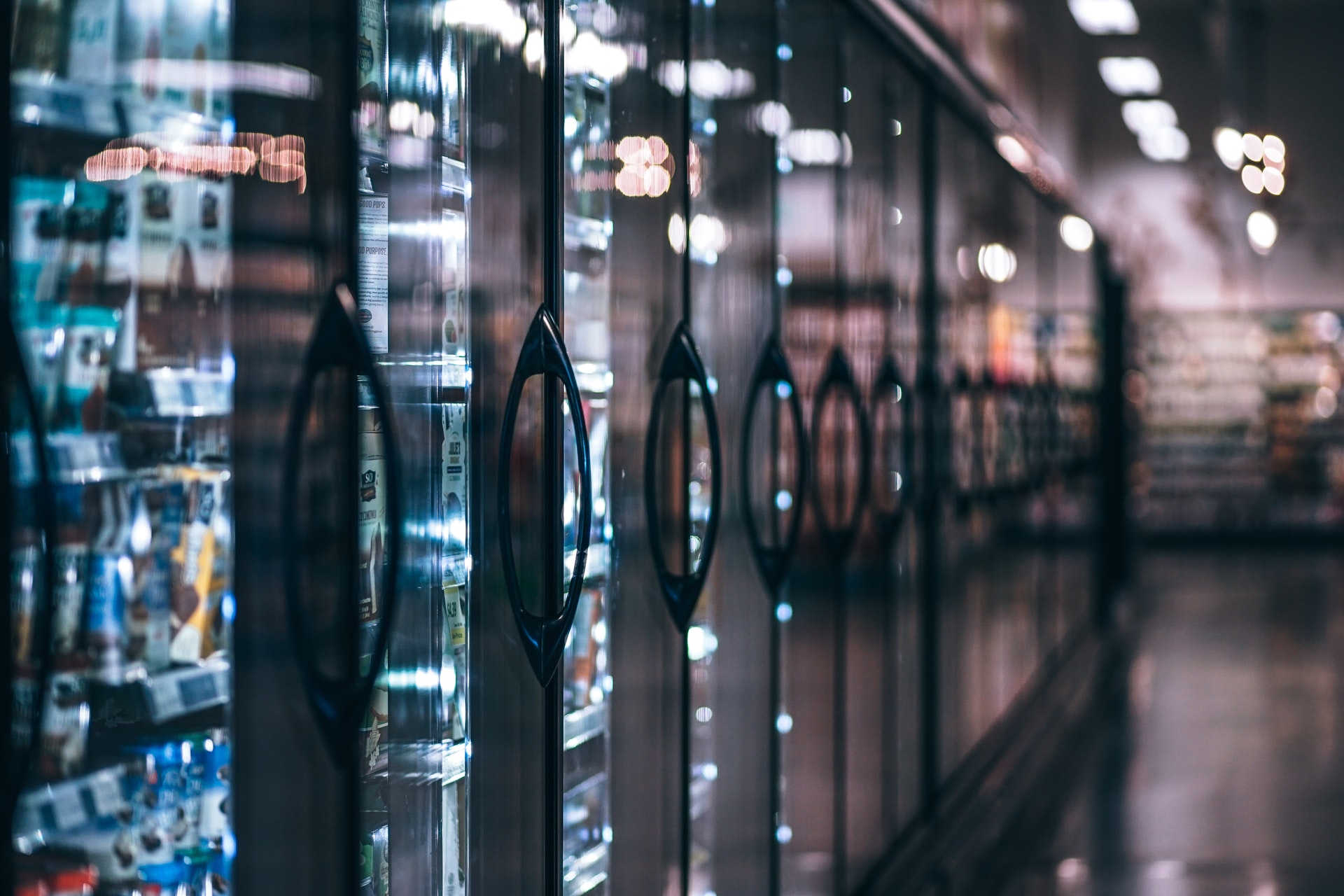 “Overall, we can’t emphasize enough how impressive the top-line was this quarter, with P&G proving it is one of the best growth stories in large-cap staples,” wrote Wells Fargo analyst Bonnie Herzog.

Take Coca-Cola, whose shares jumped 6% last week. The beverage giant beat earnings estimates and raised its organic revenue forecast for 2019 to 5% from 4%.

In February, I wrote a piece highlighting the investment merits for Hershey. Like P&G, that company has recently been able to flex pricing power and eclipse analyst expectations. The stock is up 42% since Valentine's Day.

Few would dispute that P&G, Coke and Hershey are great American companies. However, absent M&A deals, it’s unusual for stocks like these to surge this far this fast.

Remember, these aren’t disruptive companies lighting the world on fire with their growth rates. Rather, these are companies growing earnings between 6%-8%.

So, given the recent pace of gains, it’s right to wonder if the valuations of these stocks are getting ahead of themselves?

Based on the average valuations (trailing 5-years) for the previously mentioned names, it appears Kolanovic may have a point.

I think trimming these stocks makes sense and have reduced my position in Hershey.

There’s another important signal this sector may be sending, however, regarding the bigger picture setup for the market.

When Staples Rally, It’s Often Time To Ring The Register On The Market

When consumer staples valuations levitate higher in a hurry, it often foreshadows an economic slowdown around the corner. Money tends to flow to safe haven sectors before fleeing the market entirely.

The lifeblood of the American economy is the U.S. consumer. Consumers are responsible for roughly two thirds of GDP.

Consumer demand for discretionary items fluctuates based on the ebb and flow of the economy, while demand for items like the laundry detergent P&G sells is a more permanent part of the average consumer’s budget. So when consumer spending is projected to ramp, investors often overweight the consumer discretionary sector in their portfolio, while going underweight staples.

Since markets discount the future, the relative performance rhythm of staples versus discretionary can be used as a barometer for the market’s assessment of economic risk.

Discretionary outperforming is a confirmation signal for a bull market. It tells you the wisdom of the crowd (i.e., the market) projects healthy earnings for a key cyclical sector.

On the other hand, when staples are outperforming at an all-time market high—as is presently the case—the durability of a bull market is questionable.

Defensive sectors normally trade at a premium as the risk of a recession rises, because forward-looking investors know the earnings in those sectors are likely to contract less in a downturn. The last cycle provides a case study for how this works.

Staples commanded a higher P/E multiple than discretionary in 2007. But over the following year, staples saw earning-per-share grow 19%, whereas discretionary earnings plummeted into the red.

The stark contrast in fundamentals manifested in very different return profiles, as staples fell a lot less than discretionary in 2008 (–15.4% vs. –33.5%).

Below is an illustration of the relative price action of these two sectors over the previous two cycles. Staples began to outperform discretionary in early 2000 (red line rising), shortly before a recession arrived (vertical pink bar). Similarly, staples outperformed in 2007 in the lead up to the last U.S. recession. 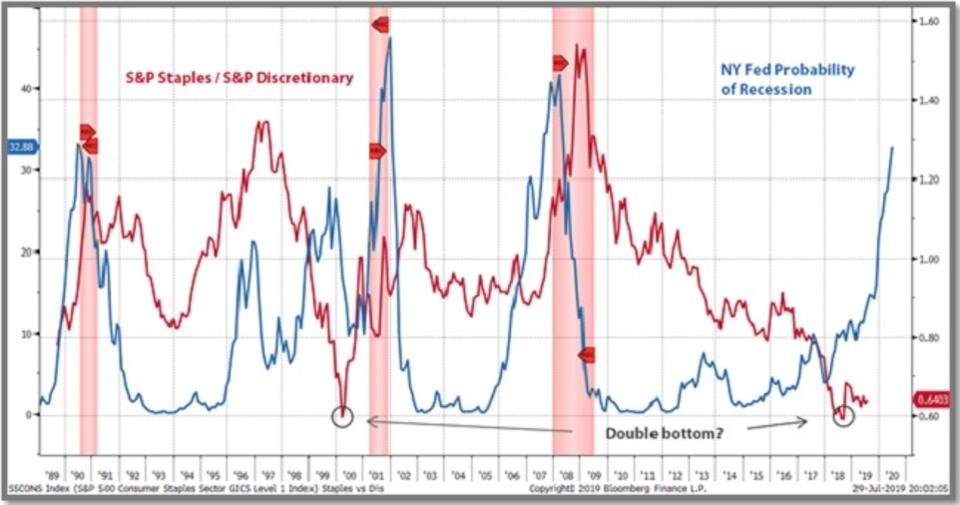 Since 2009, consumer discretionary has trounced staples in relative performance. In the second-half of last year, though, the relative ratio formed a double-bottom at a support level that dates back to the spring of 2000. Meanwhile, the New York Fed’s Probability of Recession Index (blue line) has recently been spiking higher.

Perhaps we’re closer to the next recession than many think?

Jeffrey Gundach of DoubleLine Capital, a.k.a. “The Bond King,” estimates the odds of the U.S. sliding into recession in the next year at 65%.

If Gundlach is right, consumer staples stocks may not go up much more on an absolute basis. But recession resistant firms could still see a lot more relative outperformance. That would mean they aren’t the real problem children in the average investor’s portfolio right now.

Last month, I wrote a Forbes piece describing the utility of certain technical indicators. Specifically, I prefer those that measure when an existing trend may be about to end. I’ve found the DeMark indicators to be one of the best tools for anticipating trend reversals.

Below is a monthly chart of the relative ratio of the Consumer Staples sector against the S&P 500, along with an indicator called TD Combo. Magenta 13s identify levels where price flips are probable. 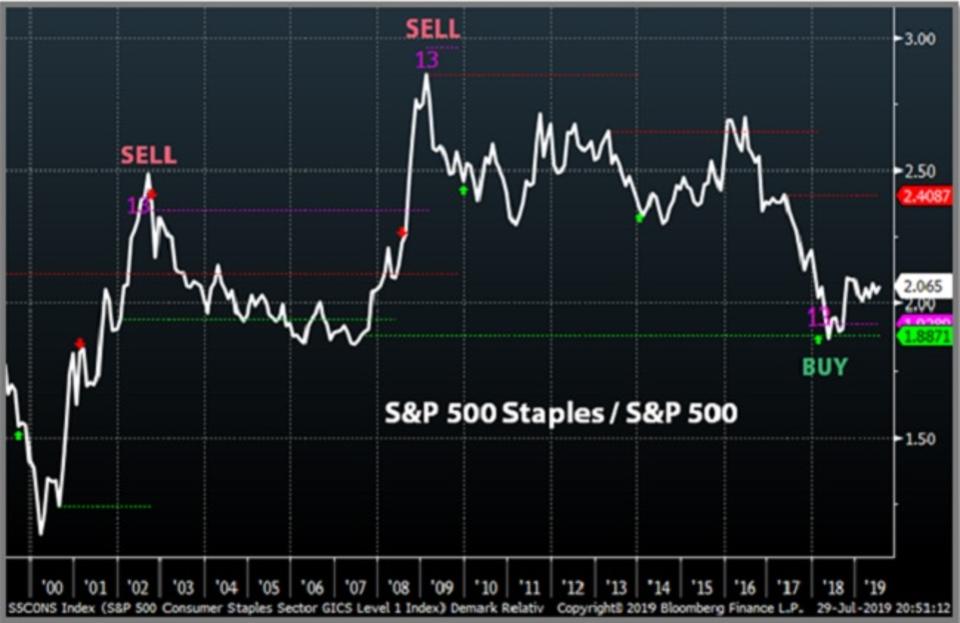 The last 13 was a buy signal since the existing trend was down. It appeared near the point where staples bottomed last year in relative performance terms. If that bottom holds, the new bullish trend could have a long runway (i.e., staples could outperform a lot more).

Meanwhile, consumer confidence is at a high level where there's normally more downside potential than upside. Similar to the previous chart, TD Combo has nailed several key inflections in this economic data series over the last 30 years. 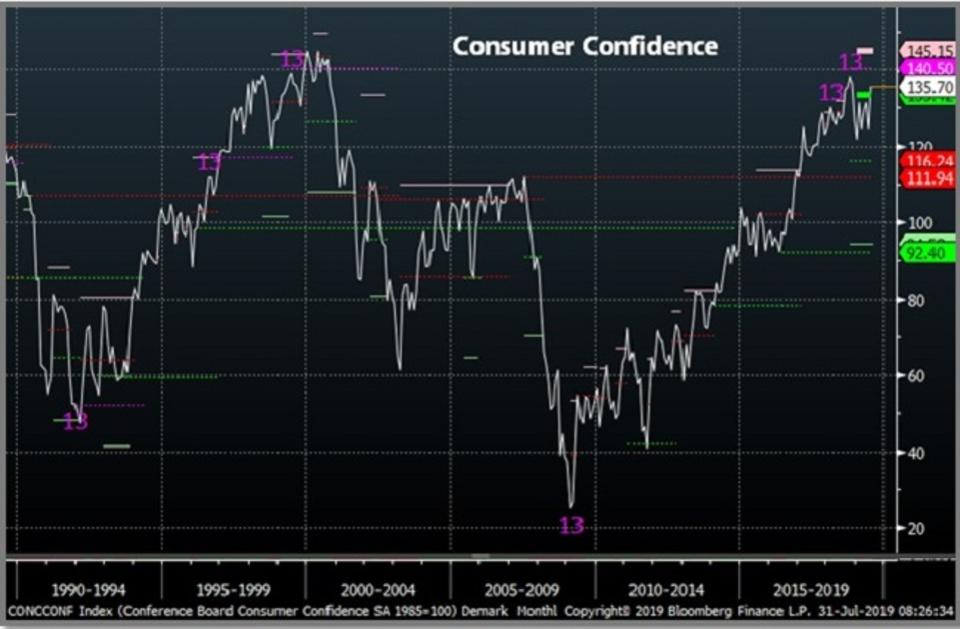 Finally, the biggest consumer discretionary name of all, Amazon, recently reported disappointing earnings. And for now at least, Amazon has formed what looks like a double top. Not an encouraging technical setup for a stock where Wall Street has 52 Buy ratings, 2 Holds, and zero Sells. 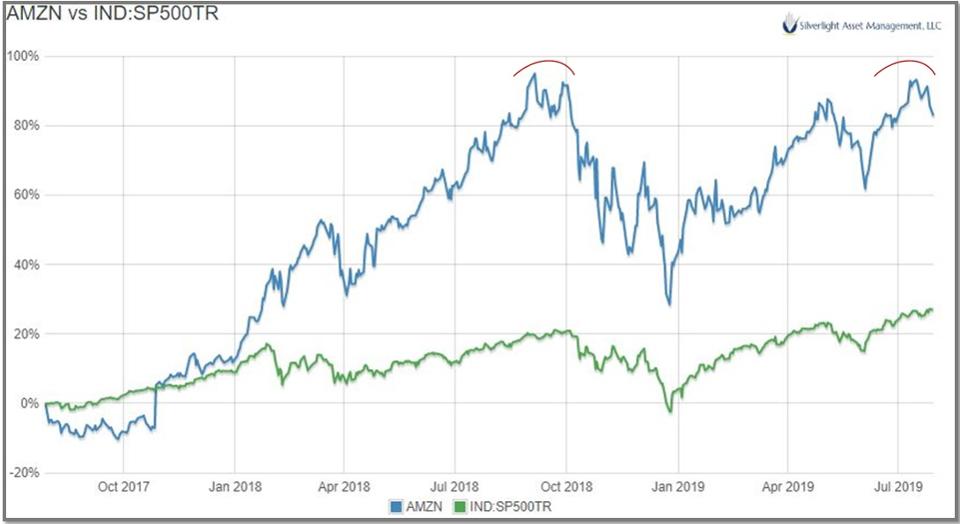 Amazon's relative performance versus the S&P 500.

Amazon is a “Market General” that's led this bull market. Watch that stock closely, whether you own it or not.

As long as P&G keeps making new highs, while Amazon fails to, discretion is the better part of valor.

Disclosure: I own shares of Hershey in accounts I professionally manage. This material is not intended to be relied upon as a forecast, research or investment advice. The opinions expressed are as of the date indicated and may change as subsequent conditions vary. The information and opinions contained in this post are derived from proprietary and nonproprietary sources deemed by Silverlight Asset Management LLC to be reliable, are not necessarily all-inclusive and are not guaranteed as to accuracy. As such, no warranty of accuracy or reliability is given and no responsibility arising in any other way for errors and omissions (including responsibility to any person by reason of negligence) is accepted by Silverlight Asset Management LLC, its officers, employees or agents. This post may contain “forward-looking” information that is not purely historical in nature. Such information may include, among other things, projections and forecasts. There is no guarantee that any of these views will come to pass. Reliance upon information in this post is at the sole discretion of the reader.​​