The Stock Market Story Behind The College Admissions Scandal

The Stock Market Story Behind The College Admissions Scandal 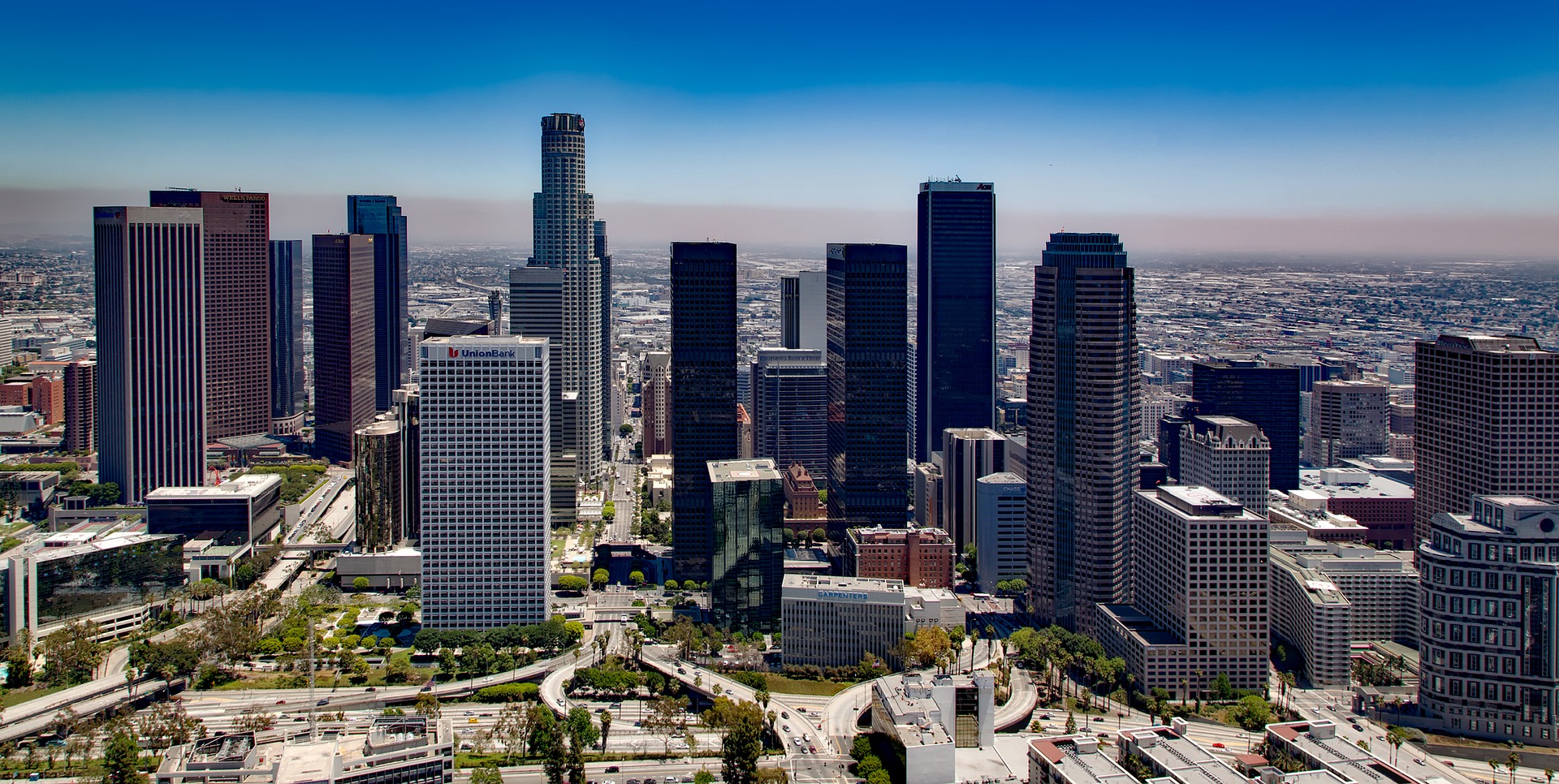 You’ve probably heard about the college admission scandal rocking Hollywood and other elite social circles. But do you know the story behind the story? That is—how authorities were tipped off in the first place?

The story I’m referring to is a stock market story, and it begins with a man named Morrie Tobin.

In the spring of 2018, federal agents descended upon Mr. Tobin’s home in Hanover Park, an affluent Los Angeles enclave. Per the Los Angeles Times, agents raided his French chateau-style mansion, seizing financial records that implicated him in a stock ‘pump-and-dump’ scam.

Sensing the jig was up, Mr. Tobin flew to Boston a few weeks later, hoping to cut a deal. In exchange for possible leniency, Mr. Tobin volunteered information on what came to be known as “Operation Varsity Blues.” The operation run by Rick Singer out of Orange County used bribes to get kids from wealthy families into schools of their choice. Mr. Tobin knew about Singer’s scheme because he reportedly participated in it, paying bribes to help his daughter get into Yale.

Before the college admissions scam erupted, though, Mr. Tobin was allegedly running a scam of his own—involving an over-the-counter micro-cap stock by the name of CURE Pharmaceutical (ticker: CURR). 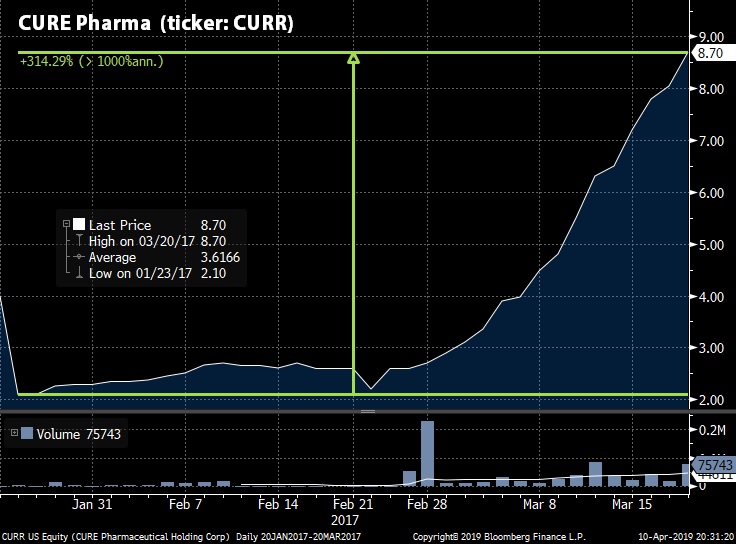 Did the company develop a cure for cancer?

No. According to the SEC, the stock’s big move was a mirage, orchestrated by Mr. Tobin and his accomplices. 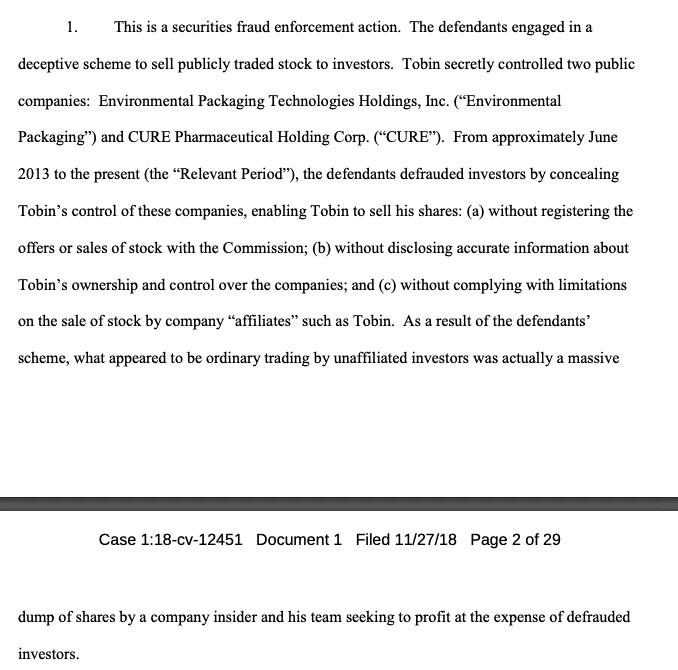 Low liquidity is the main driver behind micro-caps’ massive upside potential. There aren’t many shares traded daily. So, if a surge of buyers causes demand to vastly outweigh the available supply of shares, a micro-cap stock can rocket higher in a hurry.

Mr. Tobin reportedly owned 95% of CURR, which means outside of him, liquidity was extremely thin. To stoke buying interest, Mr. Tobin and his partners orchestrated a promotional campaign to inflate the stock price. Meanwhile, Mr. Tobin secretly offloaded shares, using offshore entities to conceal his activities.

Last month, the Oxnard, CA based company announced that it broadened its DEA license and will now manufacture cannabis-based products. This new narrative may explain why shares have rebounded to $3.40.

The wild swings and salacious background story on CURR provide an opportunity to highlight important pitfalls and opportunities associated with investing in micro-cap stocks.

Many people are attracted to micro-caps, sometimes dubbed “penny stocks,” because they often trade at a very low price-per-share. For someone without a lot of money to invest, it may be enticing to acquire a lot of shares. Example: $5,000 can buy you 10,000 shares of a stock trading at $0.50, or it can buy 4 shares of Google.

Novice investors often mistake a low price-per-share as indicative of a “cheap” stock. But that’s no way to value a security!

Whether a stock trades at $0.50 or $5,000 per share is meaningless in isolation. To properly discern value, investors should compare fundamentals to the market capitalization of a company. “Market cap” refers to the total worth of a company, which you get to by multiplying the number of shares outstanding by price per share.

An appropriate gauge for value is something akin to a Price-to-Earnings ratio (market price per share divided by earnings per share).

If you’re wondering what CURR’s P/E ratio is, don't bother looking it up. It doesn’t have one. Reason: the company has negative earnings.

This is a common conundrum with micro-cap stocks. Many have no clear fundamental value in a present form. Their value is solely in the future.

For instance, I ran a stock screen and found that of the 1541 names currently in the Russell Micro-cap Index, only 792 have a positive P/E ratio (source: Bloomberg). Almost half of the stocks have negative earnings.

When fundamentals don’t sell themselves, stocks may be marketed by folks who sell creative stories. That’s exactly what’s going on in this clip of Leonardo DiCaprio from Wolf of Wall Street.

To be fair, the micro-cap landscape isn’t just populated by scammers and charlatans. There are real companies with real growth potential, and serious investors who make serious money.

One such investor, whom I have known for over a decade, is Chris Lahiji, Founder of LD Micro.

Chris runs two of the most prominent conferences in the space every year (https://www.ldmicro.com/events) and has been actively investing in small companies since 1996.

Chris and his team comb through hundreds of stocks every year and bring what they think are the best emerging companies for a couple days of presentations and meetings to investors who aren’t looking for quick-hit trades—but rather are more likely to take a real longer-term investment stake.

Chris has seen a lot of blow-offs and blow-ups. In the following interview excerpt, he shares valuable tips for those who wish to invest in the space:

Tip #1: The smaller a company is, the more important management becomes. To us, management is about 75% of the entire equation. Are they passionate in what they are doing, disciplined in capital allocation, large personal owners of the company, and do they have the respect of both their associates and their peers? A-list management teams are hard to come by, but you can tell up close. The biggest winners we have had, have been guys who hated coming to events because it would take away time from managing the business, and executives who actively bought shares in the open market.

Tip #2: Buy assets, not promises. We track 12,800 micro-cap names in North America, and many of the micro-caps today are trading on tomorrow’s expectations. This is all good and dandy when it is easy to raise capital, but what happens when that stops? Balance sheets, income statements, and cash flow metrics are vital to whether a company survives and thrives.

Tip #3: Share structure is absolutely critical to investor success. One of the very first questions my old boss, Mr. Jim Gentrup would ask in investor meetings was to describe the capital structure of the company. Shares outstanding, warrants, options, preferreds. I learned very early on in my career that you want to focus on names that have small outstanding share counts because the management is extremely protective of its equity, and values it above everything else."

Chris later added, "Micro-cap still remains the one area of the capital markets where you have a lot of inefficiencies in valuing certain businesses. If you know where to look, ask the right questions, invest for the long term, and no market crashes occur during that time, one can do well even in the tiniest of names.”

His point about not letting "tiny" terrify you has empirical support. In a 2013 paper titled, "Liquidity as an Investment Style," researchers at the Yale School of Management made a compelling case that liquidity—as measured by stock turnover—exhibits a similar historical risk premium as other widely accepted style factors, such as size, value and momentum.

The bottom-line I will leave you with is this: whether you're casually reading stories about celebrities, or being pitched a story about a small company on the verge of changing the world, always be on the lookout for the story behind the story.