The Oracle of Foxboro

The Oracle of Foxboro

Nike founder Phil Knight writes in his memoir, Shoe Dog, “Like books, sports give people a sense of having lived other lives.”

Few sporting events have storybook endings like the recent Super Bowl. The New England Patriots overcame a 25-point deficit to defeat the Atlanta Falcons in overtime. It was riveting to watch as the Patriots completed a series of clutch plays to bring themselves back, ultimately prevailing.

Sports reflect themes we encounter in the game of life: competition, teamwork, preparation, strategy, and overcoming adversity. The thrill of victory, and the agony of defeat.

Like pro football, investing is a cutthroat game. As I watched a legendary coach and his team celebrate their latest triumph on the field, my mind drifted—as it often does—to my chosen field, and its greatest player, The Oracle of Omaha—Warren Buffett.

The Oracle of Omaha and ‘Oracle of Foxboro’ have a number of traits in common.

Belichick got his first head coaching job with the Cleveland Browns in 1991. He was 38 and the youngest coach in the league. He didn’t find immediate success. Belichick went 36-44 in his five-year stint coaching the Browns, making the playoffs just once. He kept learning though, and refining his methods. Since joining the Patriots in 2000, Belichick has gone on to win a record seven AFC Championships and five Super Bowls.

Buffett’s corporate masterpiece—Berkshire Hathaway—wasn’t an immediate success either. When Buffett originally acquired Berkshire, it was a struggling textile mill. 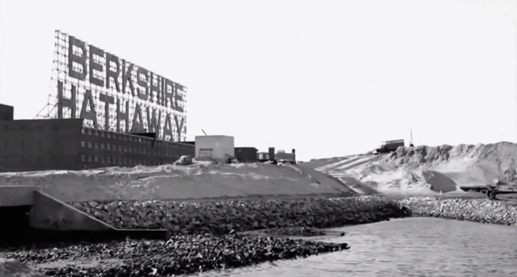 50 years later, Berkshire has transformed into a multidimensional, compounding marvel. Buffett expanded the company into a diverse conglomerate with attractive businesses across a range of industries. Shareholders have been rewarded with annualized returns exceeding 20% and a cumulative return north of 1,745,300%.[i]

Belichick has been called the best ‘adjustment coach’ in the league. Meticulous preparation allows him to be more flexible on game day than most coaches.  “I think one of Bill’s great strengths is to take what he has momentarily, figure out who he’s playing against, and then devise something that gives his team the best chance to be successful against the opponent — that week, in that moment,” says former coach and mentor, Bill Parcells.[ii]

Buffett can adapt on the fly quickly, too. He has closed multi-billion dollar deals over short phone calls, presumably running the numbers in his head, or on a sketchpad. Half a century spent delicately refining his investment lens enables him to quickly dissect deals. 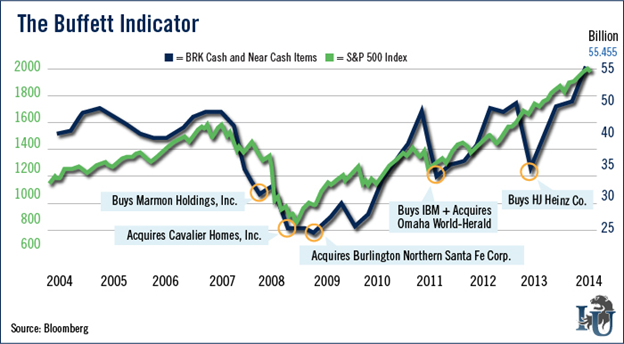 An Eye for Value

“The Patriots would hire a three-eyed midget with a wooden leg, six fingers and glow-in-the dark hair if he played well and was a good teammate,” according to the book, Management Secrets of the New England Patriots.

The Patriots are famous for turning quirky players into reliable performers. ‘The system’ is often credited. However, Belichick’s eye for spotting value lands the players on the team in the first place.

Some scouts are enamored by physical traits or combine stats, but not Belichick. The man who started reading scouting reports at the age of 9 (his Dad was a college football scout) focuses on fundamentals.

“Whether [a cornerback]’s 6’2” and covers [a receiver] or 5’9” and covers him…if they’re covered, the quarterback’s not going to throw to him. If they’re not covered, it doesn’t make any difference how tall, short, or fast he is, or how many pushups he does.”

In the field of investing, the key fundamental is earnings. Some of Buffett’s best investments have been in companies that may appear to be ‘undersized players.’

Take See’s Candy and Coca-Cola, for instance. Soda and candy companies do not grow earnings at an exciting speed over short intervals. They rarely, if ever, will be the top returning stocks in the S&P 500 for a calendar year. But if you look at the best performing stocks over longer, multi-year periods, like Wharton Professor Jeremy Siegel has, you learn the “tried and true” tend to prosper over the “bold and new.”[iii]

Steady earnings growth is underrated, just like many of the undersized receivers Belichick has won with through the years (i.e. Wes Welker, 5’9”, Troy Brown, 5’10”, and Julian Edelman: 5’10”).

A big part of winning in football games and in markets is not beating yourself.

Turnovers are one of the single strongest predictors of NFL game outcomes. Since 2000, 79% of games have been won by the team who turns the ball over the least.

The Patriots are coached relentlessly to protect the football, and since 2010, they have the fewest fumbles in the NFL. As shown in the graphic below, they are a significant outlier compared to the rest of the league. 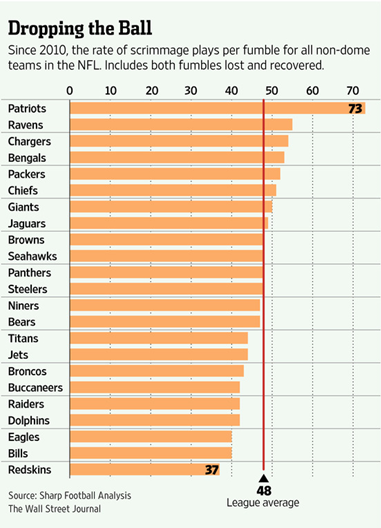 Warren Buffett is not immune from mistakes. Rarely, however, does he make very costly ones.  How many Berkshire run companies have you heard of filing chapter 11?  Not many. One reason is Buffett eschews heavy financial leverage.

Buffett has called chapters 8 and 20 of Ben Graham’s, The Intelligent Investor, “the bedrock of my investing activities for more than 60 years.” He encourages investors to read them every time the market is particularly weak or strong. Here is a summary of the lessons conveyed in those chapters:

Limiting mistakes is key to investing, because one must gain more than they lose to fully recover from drawdowns (e.g. a 25% decline requires a 33% return to get back to breakeven).

Belichick and Buffett have ascended to great heights, because they do not rest on past success. They are learning machines and always improving, while immersed in games they love. That spirit rubs off on those around them.

Take Belichick’s star protégé, Tom Brady. He was picked in the 6th round of the NFL draft after a string of other quarterbacks. Brady was a total underdog coming into the league. Today, he’s the most decorated quarterback ever. The causal factor is work ethic; he truly buys into Belichick's "No Days Off" philosophy.

Last February, Brady had a digital clock installed in his home workout room. The clock ticked down the days, hours, minutes and seconds to the 2017 Super Bowl.  So he was keenly aware all year long of exactly how much time he had to prepare for the biggest stage in all of sports. That kind of attitude, dedication, and preparation, is why Brady became the 2017 Super Bowl MVP, Belichick has more Super Bowl rings than any other coach, and Buffett is the richest investor in the world.

[iii] Excellent book on this topic: The Future For Investors, by Jeremy Siegel

The strategies discussed are strictly for illustrative and educational purposes and are not a recommendation, offer or solicitation to buy or sell any securities or to adopt any investment strategy. There is no guarantee that any strategies discussed will be effective.